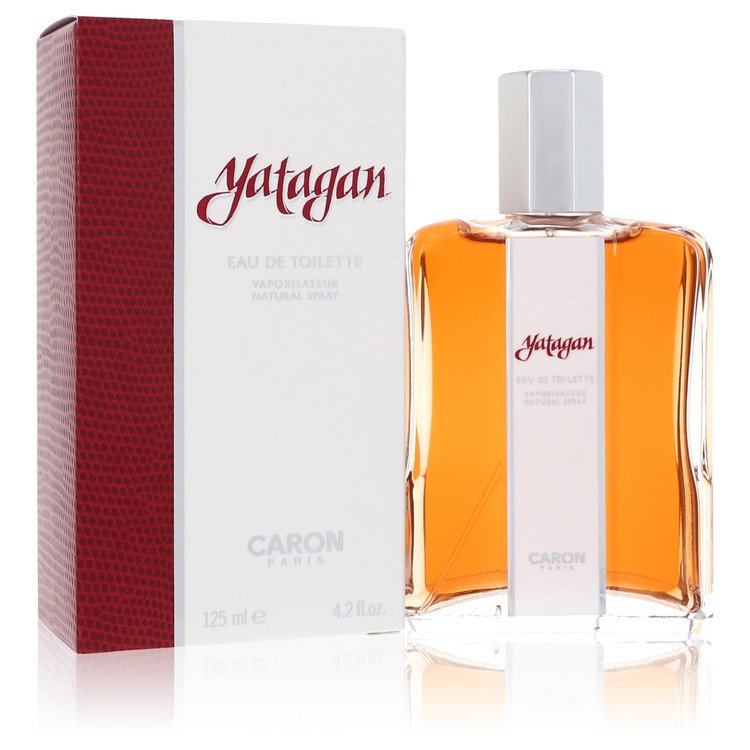 Reviews of Yatagan by Caron

There are 192 reviews of Yatagan by Caron.

aquila_2009
Show all reviews by aquila_2009
The unshaven beard,cap hat, backpack,and the face that's frowned on almost throughout the film,automatically show the character of a fighter who has reached the end of the line.this is Gregory Peck in 'Behold a Pele Horse'(1964). Yatagan is a dark green cologne for men from the 70's.it was one of my dad's fragrance and his friends,brings a lot of great memories.It brings to mind a cloudy day in spring, just after the rain; when the leaden sky makes the new growth look fluorescent green by contrast. you are riding a horse down a muddy country road.

It opens with a strong mixture of pine notes and something pleasantly sour and green.i noticed artemisia here,supplying it's nettling bitterness.as it enters the middle stage where it joins in pastoral scents of oakmoss and galbanum.there's patchouli which itself is herbal and smoky and adds an edge to the spices and greenery.finally the scent dries into asmelly,dirty leather,like the filthy saddle, that result is both fresh and dirty,and most definitely outdoorsy scent.this is definitely one for mature guys who still carry the vigor and confidence of their youthful heyday.masculinity in a bottle.

#241162
B
bookbadger
Show all reviews by bookbadger
Well, unless I'm wrong the first Guide to Perfume by Turin & Sanchez nailed it describing this classic outcast scent--one that I won't wear often but would never want to be without. On a man, it's Paul Bunyan utterly; on a woman, well, a bit agressive but only slightly more than say, Chanel No. 19. Very...boreal, primeval, great stuff!
#238466

Varanis Ridari
Show all reviews by Varanis Ridari
Caron Yatagan (1976) is a perfume with a reputation, a rabid cult following that has admittedly dimished in size over the decades as the scent ages and falls further out of relevance to the mainstream, and the one bit of legitimately challenging work in the rather docile lineup of masculines the storied house has conjured over the years. The original Pour Un Homme (1934) is a gold-standard exercise in lavender, tonka, vanilla, and musk that set a precedent for simple, clean, and confident no-frills men's fragrance, based on preceeding lavender colognes which proved incidentally popular with men; but some 42 years later Caron was less one Ernest Daltroff and in need of a successor to the aging Pour Un Homme. The 1970's was a time of massive green perfumes for both masculine and feminine tastes, with heavy animalic musks just starting to become mainstream into the 1980's, and Yatagan was at the forefront of that movement. This scent is night and day from Pour Un Homme, and indeed every other Caron masculine since, but yet still isn't quite considered the black sheep of the family like the much later L'Anarchiste (2000). I suppose this has more to do with Yatagan fitting better with the trends of the day than L'Anarchiste did when released, even if I personally find Yatagan far stranger in design. I was warned about how polarizing this scent is by people who dislike it, and the infamous "celery note" floating around in its construction. I assumed most negative reactions would be from the inclusion of castoreum and styrax in appreciable quantities, but to my surprise, they're only bit players here when compared to a proper powerhouse like the later One Man Show by Jacques Bogart (1980), or Chanel Antaeus (1981).

The opening indeed hits you in the face with castoreum right away, adding wormwood, artemisia, oregano, galbanum, and petitgrain in a bitter herbal charge. Lavender here sweetens the deal and oddly calls back to Caron's past, and the bit of odd sweetness in this opening blast links to perfumer Vincent Marcello's other benchmark Halston Z-14 (1976) released in the same year. The heart adds more indole to soften and musk up the sharp greens of the top, with jasmine, carnation and geranium performing a do-se-do around pine and vetiver to the tune of a lumberjack stooped over a roaring fireplace. There's patchouli warmth to join the castoreum and styrax in the base making this feel just a bit like Givenchy Gentlemen (1974) from a few years before; but unlike that masculine icon, Yatagan lacks the urine from civet o the richness. It's actually weird to see a Caron perfume without immaculate blending, as it is a hallmark of traditional French design, but here we are with a masculine that has an amalgamated "celery note" comprised of multiple green components just poking you in the eye with a stick, while the animal musks and patchouli just form a sort of bisque that acts as a backdrop to the green assault, never fully merging into a whole. I'd be remiss if I didn't mention the sour isobutyl quinoline leather note and oakmoss chypre base underpinning it all, but you really don't feel it until very near the end. Yatagan cuts like the knife it was named after for the duration of the wear, albeit not with the animalics, and rather the sharp food-grade kitchen herbs in the top. One friend joked I smelled like chicken soup when I entered their personal space doused in Yatagan, if that gives you any idea of how this can be perceived. Wear time is about 7 hours and sillage is moderate, but projection is surprisingly low. Again, this is not a true powerhouse, just a precursor to the style.

The person who really wants to wear Caron Yatagan in the 21st century had better use it in cold weather and like culinary green notes, as that "celery" did indeed prove to be the most challenging aspect of the fragrance. Perhaps I'm so accustomed to animalics after my exploration of ouds and civet that I was tuning out to them and instead picking up the things I wasn't used to, which is why I made sure to take my time before gathering my thoughts. Obviously it needs to be said that older bottles have better ingredients due to no restrictions on oakmoss, eugenol (carnation), and bergamot, plus slightly better blending due to the decades spent macerating in the bottles; but there isn't enough difference between Yatagan with or without some slight rounding of the corners to change my mind on this. I've reached the conclusion that I can respect and appreciate this artistically for being so daringly different (although arguably not so different in 1976 as it must seem to be now); but Yatagan isn't something I'd call a masterpiece, since I've tasted better-blended uses of both the castoreum and the balsamic notes on display here. Repeated use does make this grow on me as autumn in a bottle thanks to the compost vibe it gives me, and I may have tomatoes thrown at me from the die-hards for this; but Yatagan is really good, just not on the same level as Kouros (1981) in terms of being provocative. I don't regret adding this to my collection, and I do recommend people curious about the missing link between 70's coniferous masculines and 80's musky alpha male fragrances to give this a sample; but I implore you not to rush in if you catch a bit of hype from someone who's already been in love with the stuff for years. My love for ozonic Y2K fragrances is equally unjustifiable and I'd likewise never send someone in blind to grab a bottle of Dior Higher (2001). Thumbs up

gimmegreen
Show all reviews by gimmegreen
This salubrious perfume is an embodiment of rude health  all outdoor flushed cheeks, glossy hair and stride in the step. From its vital, bitter greens that bring to mind nature running wild, to its mint and basil freshness, and its base of sun-cracked leather, it offers a kind of coherent, germ-resistant energy that will not be denied.
Uncompromising and yet not strident, Yatagans medium projection hits that just right spot on the dial which means it can be worn and appreciated in all sorts of company  even ones own, of course. If you have a thing for feral greens in the mode of say Eau de Campagne or Coven, heres one worth trying that has a patina of refinement. The one misstep is the inclusion of some bubble-gum sweetness which it could easily have done without.
Other things to remember  this is an eau de toilette so flops to a less interesting old boys after shave mumble after about three hours and the materials are a bit cut price despite the effects achieved and over time this shows.

sellersburg
Show all reviews by sellersburg
I really cannot say enough nice things about this fragrance. It is one of my absolute favorites. It is a spicy, woodland and animalic scent, reminiscent of something that might have come out of the ancient Near East. It is strong, extremely masculine, but light enough not to be overwhelming.

Some people won't like it. Some people hate scotch and can only drink Smirnoff Ice.

They throw all kinds of shade at Yatagan; saying it's dated, that it smells like celery, that it stinks. They smell something that's not easy to classify and they aren't interesting in seeing the beauty that lies deeper down. These people frustrate me, probably because I myself don't always make sense right away! And so I appreciate scents that aren't immediate crowd-pleasers. For those of you with a unique sense of taste, Yatagan by Caron is something very special.

HouseOfPhlegethon
Show all reviews by HouseOfPhlegethon
Is this a fougere? Is this a chypre? Is this not sheer bliss?.. A touch of honey-sweet at first. Followed by a breeze of something fresh and clear. Then, musty wood. Twigs. Blend, blends, blended. It's a manly scent. Nearly aloof. It smells of an autumn woodpile, with a bite of chill in the air. I ramble incoherently...

The lavender feels dried and crushed and nearly stale. Galbanum is an un-bitter thing. Geranium and carnation are strong, stand out, for me. They are behaved. No aggression. Perfection. The pine and vetiver fuse together adding their fresh, greenish breeze.

Leather is a fine note here. It creeps up from the base to join the relaxing middle notes. Florals are never femme. They only add depth and character, like a single flower, adds elegance to a tuxedo lapel.

The base is rich-earth, as like the outdoors after a heavy, spring rain. It is calming. Notes are well-blended. The earthiness deepens as it wears on. Even with Yatagan's masculinity, I could pull this off with confidence. Very enjoyable.

Add your review of Yatagan N
Yatagan - Vintage or go with anything?

Search for Yatagan by Caron on the Basenotes forums.
Top