About Visit by Azzaro

Where to buy Visit 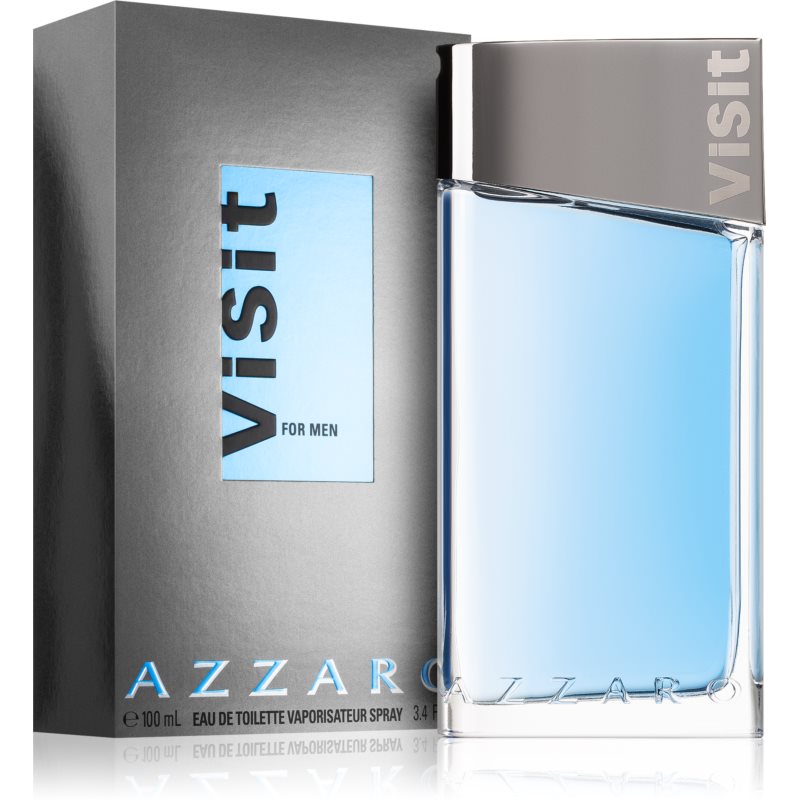 Reviews of Visit by Azzaro

There are 107 reviews of Visit by Azzaro.

Rowannicus
Show all reviews by Rowannicus
Annick Menardo has some excellent men's fragrances under her belt and in my humble opinion she's hit another home run with Visit.
This was a blind buy based on its reported similarity with Gucci Rush for Men.
Visit is very reminiscent of Rush, with cedar, Palo Santo, cistus and frankincense somehow creating the same impression as the cedar, sandalwood, juniper and cypress in Rush.
Not an analog, but it definitely elicits a sense of nostalgia.
Used to enjoy wearing Rush because it was such a beautiful fragrance but its crappy performance was always a bummer - if you were out at a concert or a club, it would be virtually undetectable within two hours.
Visit's performance and longevity are greatly superior and although it sits fairly close after the first hour, the dry down is lovely and persists for up to six hours, and more in winter.
For me, Visit is all about wood and incense - for anyone partial to those notes it's a worthy addition to the wardrobe.
Visit is definitely a crowd pleaser, and kids seem to like it too.
Could easily be worn by women too.
At current prices this is amazing value with plenty of bang for your buck.

SirScent
Show all reviews by SirScent
A blind buy purchase that did not disappoint. Light pepper and nutmeg opening that is refreshing. I don't get any heavy or cloying notes here. Somehow the combination of ingredients reminds me of a lighter and fresher version of Ferragamo. Is my nose decieving me? There is no fig listed in Visit. My only critique is that longevity is poor for me. After about an hour, the visit is over, leaving just a whiff of the guest who was here. Still, a thumbs up for the quality blend.
#246875

One of the most underrated fragrances of all time? I think so. To be completely honest, it's taken me years to fully appreciate this gem for what it is. Visit is one of the best fragrances on the market today.

Visit opens with a spicy blast of pepper and nutmeg. The opening is daring and in your face, but never offensive or abrasive. The scent transitions into a dark mid dominated by incense and cedar. Visit is rounded off with a wonderful amber base.

I'm really not sure why this fragrance doesn't get the love it deserves. Maybe it's the bottle? Maybe it's the built in sprayer? Maybe it's the comparisons to Gucci Rush? It doesn't really matter what the reason is. If this were released by Creed and priced at $300 dollars, people would be raving.

Don't be one of the crowd that will only be clamouring for the remaining stock once it's discontinued. Enjoy this beautiful fragrance and stand out from the people around you. Make a statement. Be bold.

Your Dad will love it and appreciate the nostalgia. Happy holidays!

Varanis Ridari
Show all reviews by Varanis Ridari
Azzaro Visit (2003) is a masculine fragrance that sort of embodies a particular era in the men's perfume market when optimistic thinking led to a massive increase in style diversification and pushed in sleek "the future is now" packaging. Fragrance for men in general was finally becoming about as mainstream as women's perfume had been for a century or more, and the designer perfume market exploded with options for men akin to the way the drugstore market did during the 70's, while even higher-end niche options started popping up all over as well. IFRA had just placed a minor clampdown on oakmoss in 2001, making everyone explore substitutes in fear of further restrictions that would eventually manifest a decade later, while marketing departments starting breaking down new emerging men's perfume styles by age group rather than trying to make a fits-all solution as signature scents of the past had done. Azzaro Visit was also the first new male pillar to take a risk since the brilliant but failed Azzaro Acteur (1989) came and went almost 15 years prior, following in an odd theme of old-meets-new established by Gucci Rush for Men (2000) a few years before, forming a bridge between dry woody ambers and slightly plush semi-oriental styles. The "old" comes in the form of the way the scent handles the pencil shavings wood base, something straight out of a mid-century pine scent or 70's chypre, while the "new" manifests in the semi-sweet gourmand-like spices and clean amber/musk treatments that surround these woody notes. Other full-on woody amber fragrances that became popular in the same decade went for full dry woods emphasis or used dirtier amber treatments, while Azzaro emulates Gucci by using a creamier and sweeter supporting cast, which is perhaps why it gets called the best alternative to the much-vaunted and discontinued Rush for Men. I see the similarities for sure, but Azzaro Visit is its own fragrance.

The opening of Azzaro Visit is full of metallic aldehydes and smooth spices like cardamom, ginger, and nutmeg. The biggest comparable feature of Visit's opening to that of Gucci Rush for Men is the slug of pink pepper. This was long before pink pepper was abused as a filler in modern "blue fragrances" for men, so here it stands nearly naked alongside brothers cardamom and nutmeg, while the ginger makes it all "pop". The sweetness from these opening moments comes from the white musk profile in the base, which is evident right away even at the opening, acting like a canvas the rest of the scent "paints on" during the wear. The heart features cedar, guaiac wood, and olibanum which all further the sharpness of the woody themes along, contrasting the soft and pillowy synthetic muscone-style base. Sandalwood, amber, timberol (ambergris proxy), the aforementioned musk, labdanum, and what I'll describe as an almond note (but others describe as a dry coconut) link it all together in a sheer, satisfying way. Daniela Andrier helped Annick Menardo compose this, which is why people associate it with Gucci Rush for Men, but I think it has more relation to Menardo's later Kokorico for Jean-Paul Gaultier (2010) than Rush, or even the luxury Parfums de Marly Pegasus (2011) in tone, the latter of which blends aspects of both Rush for Men and Visit together, then amps them to 11 with powerful aromachemicals. Azzaro Visit is not massively exciting, but makes for an amazing dumb reach when you're tired of fresh fougères, ambrox bombs, barbershops, and the other "usual suspects" that get snatched on a moment's notice for work. Wear time is good at over 8 hours, and projection is fine for the first four, then becomes closer to skin for the last four, but strikes me as a versatile office-friendly affair anyway since the attitude of Visit is very business-like. Best times of year for Visit are fall through spring, and although I say this can pull summer duty because it isn't very cloying, the notes aren't the most invigorating for high-heat days. I think the spicier and rounder semi-oriental elements of Visit work better for me than the lavender and patchouli-infused greener near-fougère elements of Rush for Men as a whole, regardless of price and availability.

With Menardo on board doing her thing, I think Daniela Andrier took the DNA of Rush for Men and made it into something just a bit more special than it had been in the original Gucci alongside Antoine Maisondieu, even if the banshee-wailing sycophants who clambor over each other tooth-and-claw for the glory of slaying unicorns will tell me to go stuff myself in righteous disagreement to this view. Regardless of whether or not you worship at the "Temple of the HypeBeast", Azzaro Visit is a creamy, woody, spicy, and smooth fragrance worth checking out, focusing on nutmeg over cedar on a soft amber musk foundation that's a bit artificial but with a lot of class, and is fairly age-neutral in the style department. The bottle is total early 2000's futuristic cheese with its integrated gun metal chrome spray head and angular shape, while the blue-colored liquid inside is completely at odds with the actual smell of Visit, but perhaps that's the point. Will this replace Gucci Rush for Men for a lot of guys truly, madly, and deeply in love with that lost scent? Certainly not, but it is an excellent choice for fans of high-end stuff like the aforementioned Parfums de Marly Pegasus, who might want something they can spray a little more freely without making their wallet cry. Visit had a little-discussed flanker called Azzaro Bright Visit (2006) a few years later, but it's almost a different scent. My bottom line is I'm usually on the fence about this style of scent, but the balance of spices and woods to the less-interesting ingredients binding them together is executed well enough that I can forgive its early 2000's idealism and find use for it even in dark times, especially at the usually painless prices at at which you can find Azzaro products. Be that as it may, something like Azzaro Visit isn't and can never be something spoken of in the same revered tones as many things to which it is compared, due to quality of ingredients and/or brand cachet, which may be a deal breaker depending on why you buy and wear fragrances. Thumbs up.
#228891
S
SexPanther
Show all reviews by SexPanther
Blind buy per price and base notes reviews. Happy with most of my Blind buy purchases. This one however I can't tell if it's pissy urinal mint or feminine hygiene spray extravaganza. Save your $20 this is bad bad stuff.
#222833
Show more reviews of Visit...

Add your review of Visit Members who own Visit