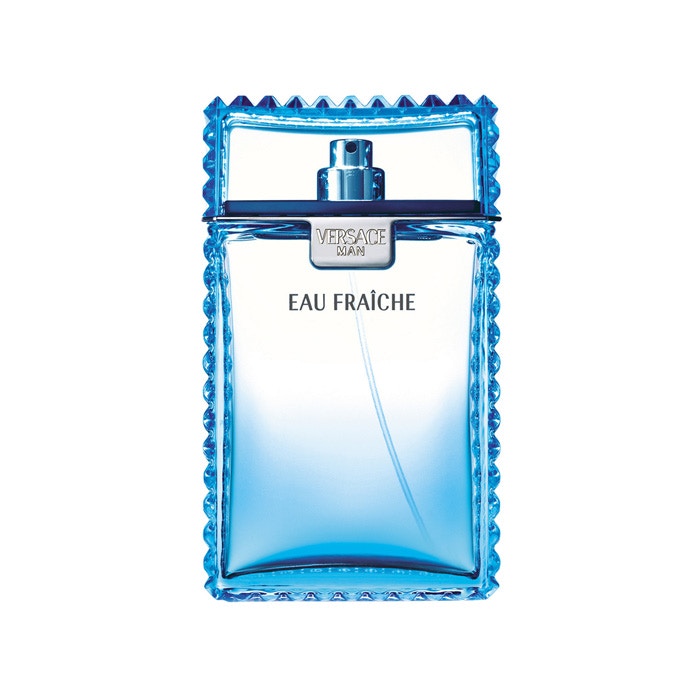 There are 162 reviews of Versace Man Eau Fraîche by Versace.

Smellyicious
Show all reviews by Smellyicious
What a lovely, refreshing and refined fragrance. A summer sensation. Simply smashing.

The glorious burst of citrus out of the bottle hangs on for a decent amount of time, drying down to a heavenly lemon custard.

Some say Azzaro Chrome Sport is an acceptable substitute. Its not really. The Azzaro is perfectly fine in and of itself, and I own it. Its refreshing and its bright citrus opening isnt too far off from Versaces, but it still falls short. Versaces fruit is fresher, juicier and less metallic. And the dry downs between the two arent comparable. Chrome Sport is pretty linear and nothing special. Versace evolves beautifully.

Man Eau Fraiche is signature scent worthy in summer. Would work in spring and fall too, but its a summer masterpiece.

The_Cologneist
Show all reviews by The_Cologneist
I wish I could detect the star fruit note listed, like I could in the old CK Crave, but it just isn't here.

Although I find this fragrance quite enjoyable, it's also very short lasting, and very linear. It's mostly a tangy lemon and tangerine, or mandarin orange. Not a typical classic citrus combination, more of a youthful style. The citrus does smell natural at times, and I even think of Jean Claude Ellena's work at some points. Where JCE always takes the route of Iso E Super as a supporting backbone to his fragrances, Cresp kept it more linear, to where I don't even really detect any woods, or other supporting base notes. Fast forward 20 minutes, I start to pick up on tarragon, giving it a the distinctive peppery/anise like smell that tarragon does so well. The sage is also hard to detect behind the melange of citrus fruits.

Sadly, it's just too light, too soft, too linear, and too boring for me. It's also overpriced for what you get, even at discounted prices. For much less, you can get the much unknown (but an absolute star to those who do know it) Banderas Blue Seduction, and get the added bonus of a fantastic mint note, and a dash of creamy coffee in the mid, that piques the interest of many who have smelled it. The retail price of Blue Seduction is still just a mere fraction of the discounted price of Eau Fraiche. The first 20 minutes of the 2 side by side, it's hard for most people to even detect a difference. Plus, personally, I have gotten A LOT of compliments wearing Blue Seduction, and none (to my recollection) wearing Eau Fraiche. If you're a young guy and wanna show off that you own a Versace bottle, then by all means, this is for you, this is the one I'd recommend, that's the most mass appealing, and also light.. which is something a lot of people actually want (though not many of us BN'ers). For me, as someone who doesn't much care about what brand makes a fragrance as much as the skills of the perfumer who makes it, I will take Blue Seduction any day of the week over Eau Fraiche. I won't be buying Eau Fraiche again, if I ever do run out.

To clarify though, it's a great fragrance. There's nothing off putting about it. I love the bottle style, and how unique it is. It's like a total 70s style woman's fragrance bottle, just as the original Versace Man was, but the fragrance inside is unexpecting, if you had no idea what it was. The aqua blue, gives you some clue that it's gonna be really fresh, as does the name.

Now since revisiting this, I will remember to recommend it more often to those who want something light and inoffensive, because I know every time I recommend a celebrity fragrance, people immediately write it off.

Hayling
Show all reviews by Hayling
A summer staple. The opening to me is a little bit too sharp and citrusy,but the drydown is where its at. Magic. It turns a little bit woody, a little bit sweet, but still masculine.. And since this has not great performance, I layer it with Molecule 01 to give it an extra ISO E SUPER kick. Oh and ladies love this stuff, compliments galore.
#219399

Drjones152
Show all reviews by Drjones152
Dont like it , it smells ok nice and fresh, but it's way to light for me, it's almost too feminine for me to say, I had a sample and I'm glad I did I thought about buying it, it's not my cup of tea at all.
Projection is ok
Longitvity is ok
Is it masculine?not at all.
I prefer Versace Dreamer..Dreamer is perfect for the daytime summer use

mistersurgery
Show all reviews by mistersurgery
Versace Man Eau Fraiche opens up fairly aquatic -- and aquatics heavy on dihydromyrcenol wear horribly on me -- so I was prepared for this to go south fast, but it turns out that this is really more of an inoffensive eau de cologne with an aquatic start.

It turns out that the acrid aquatic effects of this are really only around for the intro, and after the top notes start to dry off, it becomes a lot smoother, becoming a very clean, soapy, woody/amber with an aquatic aura. This scent really seems to bridge the gap between eau de cologne and aquatic, which some may see as a benefit. Personally, I see it as a scent that does two things at once but excels at neither. That's not to say that this isn't a good scent. It's nice if your tastes seem to fit that niche that I described, but otherwise, it just seems like another indistinctive "fresh aquatic."

Versace Man Eau Fraiche is a "mall scent" for all intents and purposes, and so long as you're not expecting this to be more than it is, you may enjoy it just fine. I will say that it performs decently in warm weather, which is always the most challenging weather for me, scent-wise, so credit is given where it's due. It's a decent yet forgettable fragrance as far as I'm concerned, but good enough that I'll give it a thumbs up and toss it into the "nice, but not for me" pile.
#218126

Varanis Ridari
Show all reviews by Varanis Ridari
Versace Man Eau Fraîche (2006) is the do-over Versace needed to remain relevant in a man's fragrance scene that was still dominated by synthetic freshies and aquatics some twenty years after their creation. Versace Man (2003) was the first real attempt at getting on board the amber and Iso E Super-led "softness" train that was sending men's fragrance down an ever more-bland an apologetic direction, which ran counter to the sharp youth-oriented ozonics marketed in the same period, but it's grape leaf focus was really at odds with the rest of the designer scene. Donatella Versace headed this one herself, and although it was a good step away from the gaudy and loud Y2K period for the house post-Gianni, it just wasn't enough to be the "next big thing" for Versace after The Dreamer (1996) a decade beforehand. Polo Blue (2002), Kenneth Cole Reaction (2004), and Nautica Blue (2006) were bringing the aquatic back into focus after it became too samey throughout the 90's, so it makes logical sense that Versace would want to make a fast buck on that wave with Versace Man Eau Fraîche, which really bares no resemblance at all to the original Versace Man outside the bottle motif. As fate would have it, Versace Man was all but forgotten about, and Versace Man Eau Fraîche became the defacto pillar in it's stead, much like how Drakkar Noir (1982) succeeded Drakkar (1972).

The opening of Versace Man Eau Fraîche is the nice, crisp "Mediterranean Sea" kind of aquatic opening that even fragrance fans loathing the genre can respect. Versace Man Eau Fraîche isn't super sweet, and keeps it's use of dihydromyrcenol "in the pocket", focusing on bergamot, lemon, grapefruit, rosewood, and tart starfruit in the first rush. The scent is still very much an early 2000's archetype despite the aquatic direction, and can be nose-burning if over-applied, but beyond that, becomes quite an "eau de cologne" type of freshness, especially when the herbaceous heart comes into view. Clary sage, cedar leaves, tarragon, and geranium round out the simple but classy middle, giving slight nods to the barbershop aficionado in the process. The base is pretty standard fare for the period, with Iso E Super "woods", laundry musk, and a composite amber note. This was just before norlimbanol or heavy ambroxan usage, so there isn't this intense umbrage of sweet or scratchy to muck up the lightness of the top and heart, but also not a lot of heft outside hot weather, which is where this belongs. Versace Man Eau Fraîche will last about 8 hours in the right conditions with moderate sillage, and is firmly in the casual territory. I'd use this for casual days at the office when it's warm outside, or weekend outings during spring and summer. Versace Man Eau Fraîche is almost the equal opposite to Versace Eros (2013) in terms of attitude, and that's why it has such mass appeal.

I'm not the biggest aquatic fan, but this stuff is pretty sharp, dry, laid back, and still plenty masculine enough to hang loose with the bros. Versace Man Eau Fraîche is a dumb-reach that flew off shelves, almost forgiving the irrevocably quirky original Versace Man that was ironically worn by younger guys than those who wore Versace Man Eau Fraîche due to it's candy-like grape leaf head note. If you want an aquatic you don't have to think about, and one that won't smell like most of the others stalking the malls these days, this is a good blind buy, and the bottle, which is a blue and silver-clad version of the original Versace Man's purple ridged and gold-trimmed one, can be found almost anywhere Versace is sold. I can't really say much more than that other than I feel like Versace may have had too much of a good thing with Versace Man Eau Fraîche because Versace Pour Homme (2008) smelled mostly like a disappointing remix of it and unessential for those who already own this one. Definitely not my first choice for somebody looking to explore the masculine side of Versace perfumes, but a must-smell nonetheless, Versace Man Eau Fraîche can only really be faulted for being in a very narrowly-defined genre swamped with "me-too" imitators and smell-alikes. Thumbs Up!
#210025
Show more reviews of Versace Man Eau Fraîche...