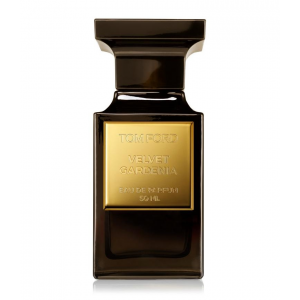 Add your review of Velvet Gardenia

There are 15 reviews of Velvet Gardenia by Tom Ford.

Kaizen1972
Show all reviews by Kaizen1972
Wow, the very expectation I had for this decidedly feminine scent was squarely met in Velvet Gardenia!

There is an intense bright floral freshness that is unmistakable with gardenia scents (the actual flower, as I understand it, is actually a bit unpleasant at certain points).

Here, gardenia starts out in the head and is skillfully accented and elaborated by the various other florals, honey, beeswax, incense, and brief citrus head note. It doesn't mysteriously and disappointingly disappear in favor of the other notes: It remains the star of the show, a sexy and beautiful ode to this legendary flower!

Dane
Show all reviews by Dane
Photorealism at its best. Flat out the only well-done interpretation I've smelled. Lauder's Tub Gardenia came close, but lost the plot and made it a full composition, what with changes, ups and downs. VG has none of that. It starts like smelling the flower - blue cheese, rotting corpse and all. and that's it. It may be only an exercise, but I'm happy to wear it when it's too hot outside.
#155695

B
blondesnotbombs
Show all reviews by blondesnotbombs
A soliflore for a notoriously difficult flower. It smells like real gardenias, which I've come to realize, while beautiful and strange, may not necessarily translate well to fragrance. It's intoxicating and delicious but a bit buzzy.
#150806

J
JackTwist
Show all reviews by JackTwist
To begin with, the name of this scent has nothing to do with its content, at least to my nose and to that of my partner.. I detect not a whiff of gardenia, velvet or otherwise.

What this does convey is that of a very light, slightly green, sweet spice accord (ginger, cinnamon, nutmeg, etc.).

It has no sillage, but does possess longevity, staying quite close to the skin. Perfectly pleasant, but not outstanding in any way.

A more appropriate name for this would have been Spice Zephyr or some such combination of the actual effect of spices wafted on a light gentle breeze.

I wouldn't invest in a bottle on the basis of sheer economics, not enough pleasure for one's outlay.
#132990

rogalal
Show all reviews by rogalal
Honestly, I think that any discussion of a realistic gardenia perfume has to start with the basic fact that actual gardenia flowers smell kind of gross, like a mix of stinky brie cheese and indoles. 99.9% of the gardenia perfumes out there are really just tuberose because almost everyone is afraid to release a realistic gardenia with its stink intact. The queen of the realistic gardenias is Jar's brutally cheesy Jardenia, but Tom Ford definitely gets points for a realistic portrayal, though he garnishes it much more with other elements.

His gardenia note is a filthy mix of indoles and stinky cheese with a shot of weird hot plastic running underneath. This is juxtaposed with tuberose and mint (so it simulates that point when a tuberose bouquet begins to rot and starts smelling minty) as well as jasmine and a sweet "grape drank" smell. It's a difficult smell - I can't deny that - but I like it, though it's fairly obvious why this one got discontinued. This must have been a tough sell.

In the beginning, when the gardenia is at its most abrasive, the grape and jasmine and mint go a long way to sweeten and tame it. As those elements fade, a rich base of vanilla and musk that kind of reminds me of Chanel comes in underneath. All in all, I think this is fantastically well done, challenging, and clever. And forward indoles smell great on me, so I'll cherish my sample...
#122933

H
hollyc
Show all reviews by hollyc
I echo Sugaranda and Caltha's thoughts on this. If this is gardenia, it should be banned from perfumery. Yes I know all of this is, and should be, subjective, but this is vile. When I read that it had a mushroom note, which to me is earthy loamy and mellow with gardenia which to me is creamy, delicate and floral I thought "where do I get me some?" and promptly ordered a small(vile) vial from the sweet ladies at the Perfumed Court. When it arrived and I applied it, it has an intense incense that smells sharp and stale much like you would find in an old church that had wooden pews with old, old varnish. Acrid, stomach churning hideosity (yes I know it's not a word but so apt here). A sweetness that is much like my poor dog's ears when they get infected. Forgive the dreadful images here, but trust me when I say that they are mild compared with the fragrance itself. I have tried three Tom Ford fragrances and so far they have been jokes, especially for the price. I think he is a darling of the fashion industry and no one dares tell the emporer he's butt naked and his fragrances are none too pretty. Get Estee Lauder's Private Collection Tuberose Gardenia for a real beauty or Annick Goutal's Gardenia Passion for a truly buttery and gorgeous gardenia (yes I know it's built around tuberose, but many gardenia frags are. I also love, adore, and own (thanks to my beloved husband) the 6.8 oz Chanel Gardenia in the Exclusifs. When sprayed on clothes it develops over many hours and becomes more lovely by the minute, a real beauty. But run, don't walk, from this stomach churning monstrosity. A thousand thumbs down, down, down . . . .
#102764

jimmyguo
Show all reviews by jimmyguo
What Mr. Ford has presented us here is a strikingly photo-realistic Gardenia rendition. Indolic, dark and almost intoxicatingly heady, it makes me feel slightly narcotic while fiercely smelling my wrists. I'm an addict now.
#82278

teardrop
Show all reviews by teardrop
This is quite difficult to describe, it is floral, but earthy.. there's a whiff of tuberose & jasmine at first, but mixed with a kind of "new car" smell, the kind that used to make me car sick as a child. lt has a dark, mysterious, haunting melancholy to it, definitely not a summer scent & not for a party mood, it would probably work best on a damp autumn day when wearing leather.. maybe that's a leather note in there? After a few moments there is a true gardenia note, & now l realise why it makes me feel sad, because it conjures up a memory of my Greek "mother" handing me a gardenia blossom before l left the village l visit regularly in Greece. l had it in my hand on the long bus journey back to Athens, but although l love the scent, it became too overpowering & l had to wrap it carefully in a tissue & put it in my bag before l got ill. The jasmine becomes more prominent after an hour but it stays quite linear after that, slowly receding like a storm into the distance, still detectable six hours later. l have great respect for it's composition but can't imagine wearing it in public, only when l want to stay home alone wallowing. Therefore l'll have to give this a neutral. mikey_p put it perfectly; "lf Tim Burton did gardenia, this would be it"!
#79042

Ayala
Show all reviews by Ayala
The moment I lifted up the lid of Velvet Gardenia to unveil its fragrance, I was swept into an unfamiliar territory, resting somewhere between dusk and twilight. A perfume simultaneously soft and diffusive like the performance of a soft-focused old-Hollywood starlet. The subtle and demure expressions are delivered by features that were intensified with false lashes and blood-red lipstick.Velvet Gardenia will strike a nostalgic chord for anyone familiar with this heady flower; yet not in the least the conventionally pretty gardenia soliflore favoured by the Southern Belle. This gardenia was grown by candle light, deeming it somewhat waxy and distinctively darker and spicier than any other gardenia-themed perfume. Its dusky complexity stems from combining wine-like top notes, the spiciness of ginger lily and the underlining honeyed sweetness of labdanum. There is absolutely nothing tropical about it; it would be useless on the beach but perfect through a blizzard paired with a fur coat.
#1298

S
shellshell40
Show all reviews by shellshell40
Notes for this fragrance are listed as: ripened black gardenia and orange, in a heart of jasmine, rose and muguet. Tuberose blending with dark plum, honey and beeswax finishing with incense and labdanum.At first I got a strident gardenia which, as one other reviewer says, reminded me of SL Tuberose Criminelle. It is unpleasant to me but mellows on the first 20 - 30 minutes. After that the incense and honey take over. The dry down on me is sweet, spicy, smoky and pleasant, but not much floral.
#68729

joxer96
Show all reviews by joxer96
I'm loving this one! No cheese or plastic here either, just a beautifully warm narcotic note with a hint of earthyness that became more prominent as the drydown progressed. Very indolic, that's for sure, but never overpowering. Seven hours into application, and it's still going strong.
#44294

Sugandaraja
Show all reviews by Sugandaraja
This is a cheesy, fungal, rancid horror-show of a white floral. Easily one of the worst things I've ever smelled. The top notes feature the titular gardenia - which, to be fair, is nice and accurate - married to a note that smells for all the world like blue cheese. As the fragrance develops, the blue cheese note gains in intensity and becomes more fungal, like rotting mushrooms smeared with rancid butter. The sillage and longevity are excellent and clearly inspired by theological notions of an eternity in Hell. Abandon hope all ye who spritz here.
#42229

M
mikey_p
Show all reviews by mikey_p
As most of you are probably well aware, the word "Gardenia" in a fragrance title is mostly meaningless as it generally means that it will smell nothing like gardenia, and a lot like a half-arsed mix of jasmine and tuberose (and in Goutal's hideous confection, celery, bizzarely). VG is an exception. It opens with a delicious Gardenia with that all important damp earthy mushroom note which give fresh gardenias their characteristic odour. The gardenia persists well into the middle notes and into the drydown as it begins to take on a darker, more animalic, more sinister turn. Men should not shy away from this as it could hardly be called feminine. If Tim Burton did gardenia, this would be it.
#14672

ubuandibeme
Show all reviews by ubuandibeme
Wow, this is a very different gardenia! The opening is camphorous, like the topnote with that same effect in Tuberose Criminelle by Serge Lutens. Heavy on the indoles, Velvet Gardenia is not a sweet or green girly flower, it is definitely wearable by a man. One could acquire a taste for the close wearing raw floral component in this juice, as it is a unique representation of gardenia. As it warms on the skin, the slightest tinge of sweetness appears, but I would never think of classifying it as 'sweet'. Also, it is creamy. Maybe that's where the velvet part comes into play. The drydown brings another Lutens association: Sarrisins. I don't get any cheesy note whatsoever, nor any plastic. But then again, I am a fan of indolic white florals! My advice is to give this one a fair shake, I love it for it's bold & different portrayal of the gardenia flower.
#24202

Caltha
Show all reviews by Caltha
What others have already said: a waxy, tropical white floral with sharp, plasticky, blue cheese-like overtones.
#27335 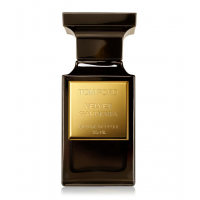