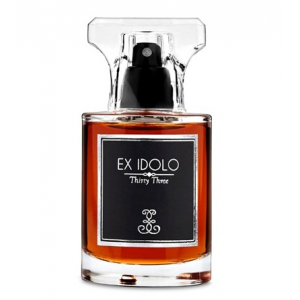 About Thirty-three by Ex Idolo

Thirty-three is a fragrance crafted from very special ingredients. The soul of the fragrance is built around a vintage oud - distilled in 1980 and aged until its release in 2013. It is also the only modern perfume to use a significant amount of wild-harvested Chinese oud oil and natural Chinese rose oil to build the scent profile.

Reviews of Thirty-three by Ex Idolo

There are 24 reviews of Thirty-three by Ex Idolo.

FSOCI3TY
Show all reviews by FSOCI3TY
It's another oud-rose combo that smells very similar to a lot of other scents. I think I'd rather go with Oud Silk Mood from MFK. I think the oud in 33 is a bit sharp and bitter. The thing is, this in the air smells just like every other oud-rose fragrance. Ex Idolo doesn't really do anything special to differentiate their version.

Performance is pretty good so nothing to worry about. Give it a try if you insist, but I don't think you'll be blown away.

justfoxie
Show all reviews by justfoxie
This is my ultimate go-to in the rose-oud genre. It's absolutely stunning from the slightly peppery opening through to the slightly metallic heart and into the warm animalic base. But it's rose all the way through and I think an incredible example of using the different facets to their best effect while staying true to the theme.

But where this really shines, especially for me, is on skin. Everything warms up and breathes beautifully. Definitely one that you want to be an "all day" fragrance, this isn't something you'll want to top up or layer with anything else. It has fantastic staying power and is something to savour as it shifts.

In a word, this is sumptuous and worth every penny.

Varanis Ridari
Show all reviews by Varanis Ridari
Ex Idolo is another UK luxury niche upstart (why is Britain so full of these I don't know), that wraps a bit of artisanal market copy around the experience of "the rarest ingredients within sympathetic composition" and "quality versus quantity" with perfumes made "under a deliberate ethos". I'll let you decipher what that means (if you deem it means anything), and get right to the skinny on Thirty-Three (2013). This is an indie rose/oud perfume, and you've mostly smelled this before if you've smelled any rose oud combinations made in the decade or so preceding it. If not, you can expect a dark rose coupled with a semi-animalic oud rounded by patchouli and orris. Thirty-Three smells slotted between the more-medicinal Black Aoud by Montale (2006) and the full animal ass that is Oudh Infini by Parfums Dusita (2015). Rose oud perfumes are such a worn out subject in the world of niche and luxury perfumes that even by 2013 Thirty-Three was released to a cacophony of tired yawns and moans of derision, but it's nice if you can ignore the ridiculous market copy. Chinese oud from 1980? I don't know. Chinese rose? Is that even a thing? Artisanal hand-crafted batches? Well, this perfume has been out since 2013 and still from what I can tell smells the same (having samples from older and newer bottle styles), so either it's a slow mover, the brand has a ton of that 1980's oud to use, or there are some white lies going on here. Either way, divest yourself of any hopes this is going to be Areej le Dore minus the gatekeepers and scalping.

Thirty-Three opens with dark rose, pepper, and a bit of mandarin orange, but you're immediately slammed with the oud note. In a similar turn to Black Aoud, the oud note binds itself wholly to the rose and you pretty much just smell "oudrose" for the rest of the wear, the key difference between the two being the ambergris-like chlorinated animalic aspects of a dirtier oud in Thirty-Three informing the wear. People who think Black Aoud is a little too tame will enjoy this aspect, but everyone else will wrinkle their nose, while the rest of the claimed notes in the composition, from the so-called caoutchou to the Chinese tea all just fall away and dissipate in this main accord. Slowly the terpines of the patchouli add hints of green, and the "Damascus steel" note of flinty metallic sheen come in to add some spike to the "oudrose", but it's not enough to steer away from the course. I'm not enough of an artisanal perfume snob to have my delicate sensibilities hurt by the cognitive dissonance between the market copy and the perfume itself, but I admit the overall ham-fisted feel of Thirty-Three gets boring after a while since it's just that "oudrose" accord from beginning to end, in a front-loaded way similar to a Tom Ford Private Blend. Thirty-Three is one of those eternal perfumes you'll need to scrub off, so performance isn't an issue. Also, the oud slowly overtakes the rose the further along the wear you go. Best use is wherever, because as can be expected, this one is a head-turner, and most likely easier to handle in colder climes or times of year unless you live particularly dangerously. Also I think Thirty-Three is unisex.

Now, I believe that Mathew Zhuk has done nice work here. This is the first fragrance from Ex Idolo and I'm assuming this is his first work too, so merit where merit is due, as this is a very well-conceived if Johnny-come-lately into the rose/oud scene, stretched over a basic chypre framework thanks to the patchouli. Passion projects being what they are, I can smell the heart and soul poured into Thirty-Three, and am really only at odds with the presentation of the house being yet another droll exercise in British luxury perfume pomp when it's really just an indie perfumer from the UK. Maybe Zhuk felt the need to borrow the exotic rare ingredients claptrap from other UK luxury perfume houses such as Fragrance du Bois or Roja Dove in order to fairly compete in this market segment, and whatever ingredients are in Thirty-Three, they are quality (at least to my nose), but all of this combined with the fact that he chose a rose/oud combo as his first release for the house just makes this a tired exercise. At a price of $120 for 30ml, this isn't the most expensive rose oud niche perfume you could buy, but certainly not the cheapest either, at a trade-off of one-third the juice for the same price of Montale Black Aoud in exchange for a little more animal vigor in the oud component. In such a prolific genre within the niche perfume world, Thirty-Three is one option among many, but in every category except complexity and marketing, is worthy of a sniff if you're a fan of the subject matter. Thumbs up

tonileefiore
Show all reviews by tonileefiore
Not a whole lot to say, or add to what has already been said. Another rose 'n oud fragrance in an increasingly crowded category.

This one is inky, dark, rather resinous with more oud than rose. Not overly outstanding.

Projection is fine and longevity is good. I agree with many of the other reviewers. This is reminiscent of Montale Black Aoud. It has a more Inky oud smell than Black Aoud, and a less quality rose. Great projection, great longevity.
#262887

Diamondflame
Show all reviews by Diamondflame
33-year old aged wild oud?? Yeah, right. Where's the oud, really? In the marketing copy, that's where. Nowhere else. Doesn't Ex-Idolo know oud scent profiles vary with age and terroir? The fact they just labeled it as Chinese rather than a specific province is a dead giveaway. Not to mention how expensive wild oud oil truly s... I'm notifying the BS police on this one and in good conscience won't be recommending it.

Other than the poorly researched ad copy, scent-wise Thirty Three is decent enough as a woody rose-patchouli fragrance to be worn by either gender without offending anyone. It almost makes up for its lack of character, making it a suitable albeit pricey option for any beginner dipping their toe into a crowded and highly competitive genre.

HouseOfPhlegethon
Show all reviews by HouseOfPhlegethon
Strong pepper. Only a hint of orange. Loud rose and orris mix, amped up in a vibrant screechy bath of oud and patchouli, leaning more towards patchouli. Masculine but not so much so that us ladies cannot wear. Long lasting.
#204607
Show more reviews of Thirty-three...

Add your review of Thirty-three

Other perfumes by Ex Idolo 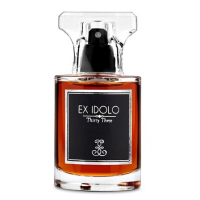 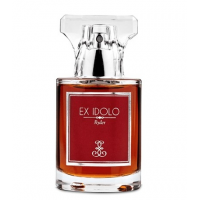 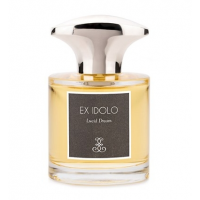 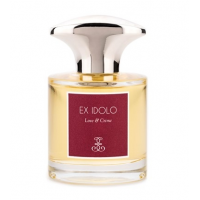 Members who own Thirty-three