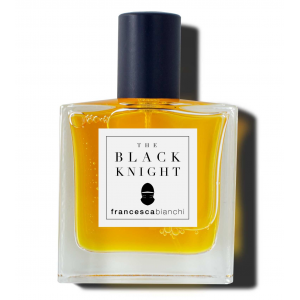 Add your review of The Black Knight

Reviews of The Black Knight by Francesca Bianchi

There are 5 reviews of The Black Knight by Francesca Bianchi.

Z_LiDs
Show all reviews by Z_LiDs
Leather, vetiver, dry green notes and iris to make everything more dusty. Pungent, sometimes rough and angular. It's male, not simply to indicate his gender but because he is really male to the nth degree. There is not a single note in this perfume that makes it even vaguely unisex. I do not find it difficult at all and I also use it at work in very very formal contexts, it is a perfume that can be felt and distinguished, it tastes like a man, an adult man. Absolutely not suitable for a kid in a tracksuit or Bermuda shorts. Like the others Bianchi's perfumes, of course, it is not to be blind bought but must necessarily be tried (well) first. Performances absolutely worthy of the declared concentration, not like the other crafty ones (including Italians, but we don't mention names ...) who declare "Extrait" and have poor EdT performances; duration about 10-12 hours, with a moderate wake sillage in the first two, you will feel it for a very long time. Nice nice nice.

eriqesque
Show all reviews by eriqesque
Absolutely gorgeous fragrance. This is undeniably one of the best smelling scents I’ve encountered in many years. Already backed it up by 2 bottles.

The key to this one is definitely less is more. Spraying too much drowns one’s ability to pick up the different stages of this perfume.
Also spraying at a 6-7 inch distance. This stuff is beyond potent. It’s absolutely nuclear. It makes vintage Fahrenheit whimper.
The opening is an artemisia and caraway blast, a bit of a nose tingle but in 10 minutes and for the rest of the 12-14 hours it’s just olfactory orgasm.
After the harsh open you’ll get hit with the leather smoothed with some honey a hint of rose as if the petals are crumbled with leather gloves and then scattered on a some beeswax melted with Iris. The heart of this is where the magic is absolutely beautiful. Patchouli enters in the background before smokey Vetiver and some more leather close out the base for the rest of the long lasting end. This fragrance projects from beginning to end. From loud to soft but never less than an arms length until gone. I’ve had compliments on this fragrance at the 10 hour mark.

Singularious
Show all reviews by Singularious
This is the angryest perfume I own. And there is a place for this. Probably several.

And that is the joy in it. It has monstrous projection and longevity, so be able to tame it, and raise an obscene salute to anyone not willing to tolerate your olfactory aura, or really anything else whilst wearing this.

This is one of my favorite leather scents, as much naughty as defiant. Very thankful a fellow basenoter introduced it to me.

And for those judging the state of my life, deeply inhale the punk rock beauty of Ms. Bianchi, and re-reference paragraph #3 above.

Buzzlepuff
Show all reviews by Buzzlepuff
The Black Knight opens with a bitter green deep woodland plant and mosses accord that is a result of the exotic touches of artemisia, caraway and bitter green narcissus overlaying a rooty vetiver, clean cedar and aged patchouli base. These notes create the dark mysterious Black Knight green moistened leather feel that flows into a cool vetiver, cedar and patchouli basenote. As the fragrance ages the leather and patchouli become slightly more assertive. The iris heart note provides some light to these cold dark strokes to prevent a collapse upon itself and become all density. The iris butter, honey and beeswax also adds a little lyrical twist of spring fed naughtiness that dances through the dark woodland shadows. The Black Knight is a serious dark green patchouli and moist leather, brooding medieval perfume that creates its own legend from a story of its own making. Rated 4 of 5 stars!
#231580

ClaireV
Show all reviews by ClaireV
It took me a bit of time to understand this perfume, but after ten days straight of wearing the damn thing, I'm all in. Opening with a hoary Old Man and the Sea' vetiver that smells like a bunch of whiskey-sozzled men in damp tweed around an open fire in a cramped little Irish cottage beside the sea, it immediately establishes a tone of neglect and closed-up spaces. Slightly analogous to vintage Vetiver by Annick Goutal and Muschio di Quercia by Abdes Salaam al Attar, the vetiver here is denuded of all freshness and twisted into a grungy leather that smells more like something dug up from the bowels of the earth than grass. But for all its salt-encrusted, boozy staleness', I think The Black Knight succeeds for much the same reason that Patchouli 24 does, in that it balances out a smoky, barely civilized leather accord with a softening layer of something sweet and balmy, delivering both the sting of the whip and a soothing caress in one go.

The Black Knight swaps out the birch tar of the Le Labo for an interesting cuir accord built mostly (as far as I can tell) from that hulking vetiver and some of the bitter, meaty Cellier-esque, Isobutyl quinoline-infused leather that's been popping up quite a bit recently (see Rose et Cuir). It takes some time to dry down into that softening layer of balmy beeswax  infinitely more balanced than the sweetness in Patchouli 24, which is more sugary and vanilla extract-like in character  so before we settle in for the final, long drawn-out waltz of leather and cream, there's a surprising development or two.

Most notably, past the opening of dusty grumpy old man' vetiver, an animalistic accord emerges, pungent and sticky with honey, and almost honking with the freshly-urinated-upon-hay stink of narcissus. Bianchi's treatment of orris is fascinating to me  she can make it high-toned and mineralic, or funky with the low-tide halitosis of ambergris or blow it out into a big, civety floral cloud. Here, the orris is briefly pungent, with disturbing hints of rubber, boot polish, tar, and urine. This pissy-rubbery stage almost never fails to surprise me  and I've been wearing these two samples for the past ten days straight. Don't smell your skin too closely and you might miss it entirely.

The Black Knight seems to go on forever, dawdling in that balmy double act of creamed beeswax and hard' leather before eventually dropping all the sweetness, leaving only mineralic dust and the faint whiff of marshy runner's sweat (a drydown it shares with Le Labo Patchouli 24). The Black Knight is a bolshy, mouthing-off-in-all-directions strop of scent that's probably not the easiest thing for a total beginner to carry off. But it's striking as hell, and never less than sexy.

More on The Black Knight... 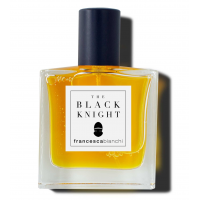