About Tabaróme Millésime by Creed

Tabarome includes notes of Tobacco, Sandalwood and Vetiver and the liquid is tan coloured.

Where to buy Tabaróme Millésime 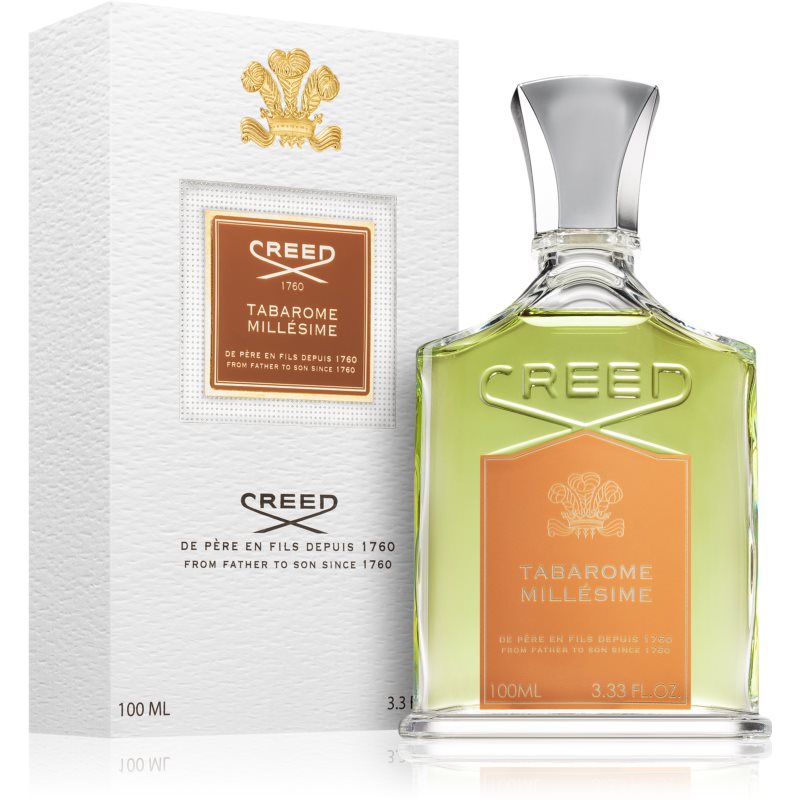 Reviews of Tabaróme Millésime by Creed

There are 125 reviews of Tabaróme Millésime by Creed.

64 Positive (51%) 32 Neutral (26%) 28 Negative (22%)
M
mattandhiscat
Show all reviews by mattandhiscat
Tabarome is a fragrance of quiet confidence.. in the best possible way, gorgeous opening and fairly bright with bergamot and tangerine , quickly the ginger backs up the opening but doesn't overpower and there is a subtle organic greeness in the background, as tabarome drys down i can smell salty sea air and at this stage I'm reminded of millesime imperial, if this is a tobacco fragrance then it is the clean leafy green type and perfect for humid climates, performance is good but very understated , I kept getting little whiffs as the day went on...I think this would be a great fragrance for summer evenings.

#248358
D
ddddmike
Show all reviews by ddddmike
I give it Thumbs-Up based on current discount pricing. Here's what this should be: $100 for 100ml. At that price, it's the perfect fragrance for people who don't like fragrances. It smells like...fragrance. Unobtrusive, unassuming, no chance of being offensive, but not chemical-smelling, not crappy, not loud--just well-made, quality....fragrance. Notes aren't even important. It is to fragrance what Toyota Avalon is to cars.
#232287

Jay-Lux'eau
Show all reviews by Jay-Lux'eau
Instant flashback but I don't remember to what exactly. Suspecting after some thought that the culprit is one or more old formulations of Tabac by Maurer & Wirtz.

Very pleasant this one. Fresh ginger heart paired with ambergris in the downward direction. Subtle tobacco but it's very present nevertheless. Nice zesty top, might also be the citrus side of ginger interacting with the orange top. To me it is able to compete with (modern) Tabac's quite complex herbalness (lavender, petitgrain, vetiver) with just that one note, ginger. Crazy.

Or maybe it's the fact that keeping it simple with just that one note doesn't distract that much from the lovely combination that is tobacco and ambergris.

If (like me) you feel Tabac is letting you down nowadays, try this one.

Pheusinger
Show all reviews by Pheusinger
If I were to blind sniff, not knowing what this was, my first impression would be...ok, I like this. It's nice. A little less contemporary than I typically go. Sweet up front with a woodsy/patchouli follow. A hint of tobacco.

Varanis Ridari
Show all reviews by Varanis Ridari
Tabaróme Millésime (2000) is a modern re-orchestration of the original Tabaróme (1875) supposedly created by Creed for a wealthy English statesman during the Victorian era. That scent was a dark, sharp, and rich tobacco leather scent which was claimed to have been worn by Winston Churchill alongside Blenheim Bouquet (1902). The 2000's was a period for Creed where they sought to ween themselves off of legacy re-issues and "elevated" takes on conventional designer genres, breaking out into more original and striking designs meant to set Creed apart from their competition, especially in light of the emerging niche segment of ultra-expensive but more-expressive artisinal houses that were focused on perfume as art. Tabaróme Millésime and Himalaya (2002) were early efforts at this, although they would continue on with takes inspired by designers with stuff like Original Vetiver (2004) or Original Santal (2005). Creed would be hit-or-miss until they decided with Creed Aventus (2010) to blend the faux-history with a more "classic French approach" that blended the aesthetic of their claimed past with a more mass-appeal style, stapling on plenty of "you earned it" status-focused marketing to drive white-collar millennials wild. Unfortunately, the re-orchestration of Tabaróme into Tabaróme Millésime has left it something of a mess that totally misses the mark, and although I can see how people like this, I'm pretty indifferent about it, especially given its price point and backstory carried over from the original Tabaróme it replaced. Hardcore Creed collectors will wanted the vaulted original, and new wave Creed fan boys won't usually venture farther back into the Creed catalog than Himalaya unless it's to get a bottle of Silver Mountain Water (1995) or Millésime Impérial (1995).

Tabaróme Millésime opens with bergamot and tangerine, a semi-sweet juicy holdover from their 90's period married to the same ozonic sharpness as Millésime Impérial but feeling more like it's created by camphor than sea salt, then spiced up with a hit of ginger. For a scent that claims to be all about tobacco, I get very little actual tobacco in Tabaróme Millésime, and absolutely no leather whatsoever anymore. I have been very happy with most of Olivier Creed's solo compositions without a Pierre Bourdon or his son Erwin to assist him, but on this one he appears to have completely murdered the legacy of Tabaróme in the name of modern appeal, which is not unlike what designers would do a decade or so later with their own reboots of classic fragrance lines using entirely new compositions. Cardamom bridges the fruity citrus Y2K opening and ginger to the new aromatic base of Tabaróme Millésime, taking the old pipe tobacco of the original and replacing it with a faintly-detectable whole leaf variety similar to Versace the Dreamer (1996) but not as distinguished. Dry patchouli, Creed's signature ambergris, red sandalwood, musk, Iso E Super, and galbanum in the base (like Silver Mountain Water) create the final woodsy skin feel of Tabaróme Millésime, but it's fleeting and under performs not just for this price segment or Creed, but altogether, making for an underwhelming 6 hours max wear life. Tabaróme Millésime is more mature and formal when compared to its Creed contemporaries, and likely the choice of older clients looking to branch out from their vaulted classics, but it's a huge let down for anyone else. All that said, the fragrance isn't bad, just not good enough as a high-end entry into the tobacco trend that was happening around that time, although if you said somebody like Lomani composed this and sold it for $20, I might have given it a thumbs up.

I don't know what to say. I don't hate the stuff, but I don't think it gets the point across for what it is supposed to be, and Tabaróme Millésime is pleasant enough of a scent, but leans too hard on it's purpose to bridge the ultra high-end designer 90's business model with the new heritage-flavored niche 2000's one. No amount of Creed will save the kind of white-collar clients they cater to from being laid off one day when the software they wrote to replace them actually does, and local offices close in favor of remote-operating guys who don't even climb out of their pajamas to wear designer duds let alone use fragrance of any sort (I'm friends with some so I know). The older CEOs they teleconference with, to whom the style of Tabaróme Millésime might appeal most, have moved on to even more expensive Roja Dove or Clive Christian anyway because they've graduated -from- Creed, so I see zero point in office-friendly puffery like this fragrance. I guess if you're the kind of person who needs every last variety of Creed in existence for your collection, you're bound to find some favor in this to take it home, plus if this found it's way into your collection as a gift, it would see some appropriate use in office or business casual settings, but buying this by choice for the prices it carries seems so foolish to me when - like Creed Viking (2017) - there is so much better reference material in the genre for less. I'll avoid a thumbs down, but it's a really heart-wrung indifference since I love tobacco fragrances, and even discounting the awkward fruity citrus 90's opening, there isn't enough meat on these bones to make me buy into what Tabaróme Millésime is selling. Neutral
#241452

I wasn't blown away but I must admit that Tabarome was a lot better that many reviews had suggested. It just lacks bit of magic. Where many leather/tobacco scents are dry or mixed with fruit and spice this has a soapiness to it. Or maybe a creaminess?? Anyway it is quite different from others in the genre.

Add your review of Tabaróme Millésime

Members who own Tabaróme Millésime