About Sublime by Jean Patou

Where to buy Sublime 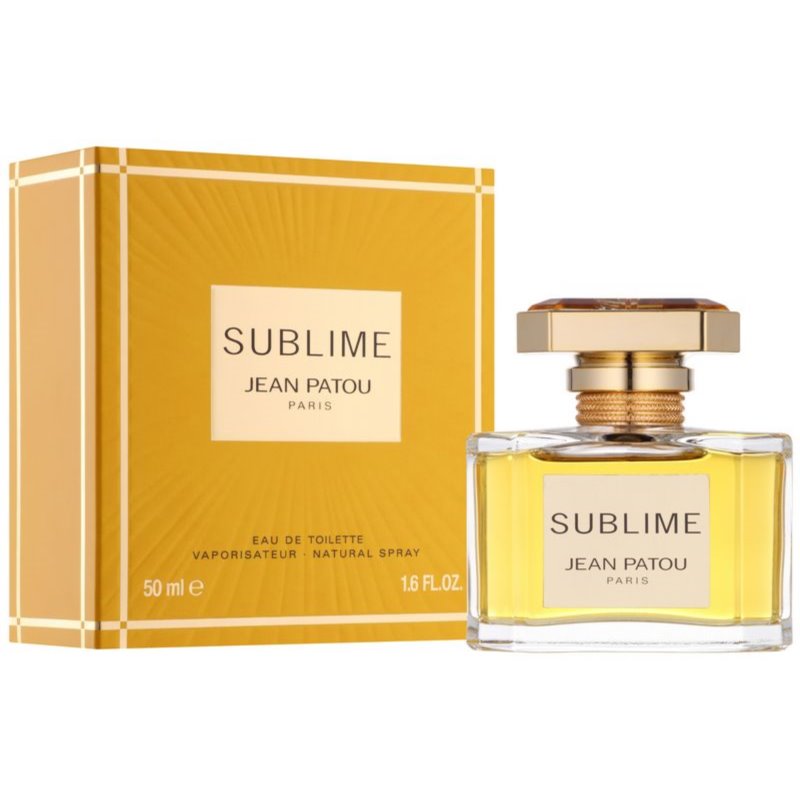 Reviews of Sublime by Jean Patou

There are 32 reviews of Sublime by Jean Patou.

So that brings me to Sublime, which smells ostensibly like rose and amber, but much more like a thick, opaque block of powdery "Perfume." It's main selling point is that it has the rich, musky Patou base, which works well in this spicy floral "oriental" mix. But it's main drawback is that block of perfumey haze, which is largely devoid of sparkle or magic, especially when viewed alongside its sisters, Joy and 1000.

I can't find fault with this technically, but it just doesn't work for me emotionally. Sitting though hours of powdery blob to get to the good part isn't enjoyable, so I'm voting neutral. That being said, I'm painfully aware that I may return to this in another 10 years and utterly fall in love...

Varanis Ridari
Show all reviews by Varanis Ridari
When I approached Sublime Jean Patou (1992) for sampling and review, I was both surprised and not; this was at once a classic chypre from the Oakmoss Maestro Jean Kerleo, and a perfume meant to fit within the shifting olfactive landscape of the 1990's. Kerleo gave Jean Patou bean counters both the market-relevant perfume they demanded yet also didn't, sticking to his ostensibly classic style in the base, something he would also do to a lesser extent with Voyageur Jean Patou (1994) when asked to deliver an aquatic for the male market. In the same sense that Voyageur was a layered olfactive parfait that went from new to old as it dried down, so does Sublime present itself as beholden to trend in the first fruity-fresh opening moments, only to show its musky animalic bone structure after it settles in. This of course comes across just modern enough for classic Patou fans to love Sublime for feeling new and exciting compared to their bottles of Joy (1930) and 1000 (1972), but for the mass market it entered at the time, Sublime was still seen as an old madame just like Lanvin Arpège (1927) or any of the mid-century Dior femmes. Sublime sold well enough to keep the doors open, but it was not the runaway success bringing Patou into the "modern age" that it was likely meant to be. Considering Sublime also managed to avoid the chopping block like much of the Patou catalog after so many changes of ownership, I suppose one might say that Kerleo was playing the long game with its design.

Smelling Sublime Jean Patou from the start, a lot of "90's chic" notes come to the fore in the first few minutes. You get some bergamot mixed with sweeter citruses like mandarin and neroli, with some slightly powdery iris as feminine perfumes by the 90's were returning from the loud big-boned roses and tuberoses of the 80's to something more dainty and apologetic in the years to come. The 90's was the hazmat crew coming to delouse society with stylistic asceticism after an uproarious 80's, which is why stuff like Calvin Klein cK One (1994) took off like it did, and Sublime communicates the same intent at first, but only at first. The heart is full of dry spice and florals like muguet, carnation, coriander and ylang-ylang, touched with rose and jasmine indole. The base warms up even more, seeing the powderiness of the iris fall away to a base of civet, styrax, sandalwood, amber, and patchouli, cleaned up only a touch by the lingering orange blossom tones and a late-stage vetiver. Tonka and oakmoss play their usual anchoring roles, with vanilla keeping the musky skin scent close enough to the feminine wheelhouse to not raise eyebrows too much. Sublime becomes semi-oriental by the end, and is one of few fragrances that starts as office-safe then finishes as anything but, so wear however you see fit. Projection is not monstrous but Sublime has plenty of staying power thanks to the heady base, and feels best in cooler weather, plus could be unisex if you enjoy animalic warmth.

Of course, the next question might be who should wear this perfume in the 21st century? That depends on what kind of perfume enthusiast you are. If you enjoy classic themes with novel twists, this may suit, but if you are looking for the typical fruity floral vase water being made around this time, pass on Sublime. I think that like many partially or fully-anachronistic scents made on the cusp of the 80's and 90's (since revisiting structures from nearly a century before was a fad at the time), you have to perceive Sublime Jean Patou not as a product of the 90's, but a fragrance meant to pay respects to the golden age of classic perfumery that ran from the late 1800's up until the 1950's, when terms like "chypre" and "fougère" first became commonplace in the industry. It is only then when viewed alongside icons like Caron Narcisse Noir (1911), Chanel No. 5 (1921), Guerlain Shalimar (1925), Dana Tabu (1932) and Miss Dior by Christian Dior (1947), that Sublime Jean Patou begins to make sense. Kereo was in essence, making *this* kind of perfume with an introduction tailored to a 1990's mindset, and in so doing succeeded wildy, but also made a fragrance mostly without an audience. Luckily, this little gem has more than found that audience decades later, even if mainly among perfume enthusiasts. Good call playing the long game after all, huh Jean? Thumbs up.

Wild Gardener
Show all reviews by Wild Gardener
It has been difficult to pin down the green fruity accord that Sublime opens with, but Pineapple Broom is the nearest I've got; Genêt in French, Cytissus battandieri in gardening speak.

After the broom and citrus fly off you get a thick, orange flower and ylang oriental where bitter notes give some interest to the bland powdery sweetness.

It's like a shy cousin of Giorgio who came to the party way too late - in 1992, just as everyone was going aquatic. She's nice enough in her own way, but sublime she ain't.

mightycrone
Show all reviews by mightycrone
Soft, feminine and refined. Naturally, I loathe it.

Vanilla and a cloud of powder. In a bottle. This is a current edt, so I'm thinking that the vintage has a lot more complexity. For a dirt cheap version of this, try Ciel by Ulric de Varins.

jtd
Show all reviews by jtd
Somewhere in the 90s the chypre fell off the radar. Blame the IFRA, blame Angel (also 1992), blame whoever you like. It went quietly from the pinnacle of chic to over-the-hill faster than you can say mousse de chêne.

Why and how to restrict perfume materials is a popular if confusing debate today, but in the 70s-90s the discussion of the hazards of aromachemicals and botanicals took place behind closed-doors. The general public didnt know what went into perfumes in the first place or who made them, so discussions about restricting oakmoss or refining bergamot had little significance. They did have a stifling effect on perfume composition, though it might not have been readily apparent in 1992.

Chypre perfumes tend to have a strong presence and its easy to characterize the eras of the chypre. The ur-chypre by Coty and the seminal chypre by Guerlain, Mitsouko. The animalic chypres of the 40s (eg. Miss Dior). The moonlit floral chypres of the 50s (Jolie Madame.) The aldehydic and green chypres of the 60s (Calèche and YSL Y ), the liberated chypres of the 70s (Aromatics Elixir and Diorella) and the roaring rose chypres of the 80s (La Nuit and Parfum de Peau).

But the chypre seemed to lose its identity in the 90s. It was seen as both suffocating and passé when compared to the self-effacing new style of 90s perfumes and their notes of air, water, light and apology. After the loud florals and orientals of the 80s, modernity in perfume came to be synonymous with minimalism and the chypre became synonymous with old-fashioned. Traditional perfumes became outmoded and classical perfumery started to seem like bad Hollywood Regencystylistically overburdened yet without the saving grace of true kitsch.

The 1990s chypre-style, if there was one, played with the chypres affinity for fruit notes. YSL Yvresse (Champagne) 1992, Nina Ricci Deci Delà 1994 and Cartier So Pretty 1995 split the difference between the chypre and sweet fruity-florals of the day. Hybrids such as these aim for the best of both worlds. The risk is that they lack synergy and simply combine notes and materials from each genre. These three were famously successful but have been discontinued, I suppose pointing out another risk: that even a successful hybrid might not be popular enough to stay afloat.

Sublime has a finger in so many different pies that the term hybrid doesnt quite capture it. Chypre? Oriental? Woody Floral? Yes, and then some. I think of it as a Resinous Woody Chypre. Cop-out? Sure, but it fits. Its also fruity, floral and powdery. Powder over woods creates a sweet-tart dynamic similar to the vetiver-vanilla dissonance of Habanita, but in Sublime it is quieter, less stark. Mandarin and ylang ylang give Sublime a lusher feel than the expectable bergamot/white floral found in many chypres. It follows a long arc and the drydown takes its time arriving. Atypical for a 90s perfume, the basenotes are the most complex part of the perfume. Resinous woods define the drydownvetiver, patchouli, and especially sandalwoodbut amber, musk and civet keep the woods from growing sharp. The pillow-soft drydown is classically proportioned and has the diaphanous depth of traditional woody orientals like Vol de Nuit and Bois des Isles.

Unfortunately its no surprise that Sublime sputtered and stalled. It wasnt badnot by a longshotbut it was seen as irrelevant when held to the growingly detached, hygienic aesthetic that would come to define the 1990s. Viewed on its own merits, Sublime is a history lesson on the genre by one of the 20th centurys strongest classicists and historians, Jean Kerléo. It is also urges speculation as to where the chypre genre might have gone if materials restriction hadnt hobbled it.

Whether you like traditional chypres or not, if youd like a tour through the history of French perfumery in a single bottle, try vintage Sublime. It illustrates the techniques and ideals of a century of perfumery and who better to conduct the tour than Kerléo, founder of Osmothèque?

Add your review of Sublime Members who own Sublime

Are you a fan of Oud Sublime by Nicolai?

Search for Sublime by Jean Patou on the Basenotes forums.
Top