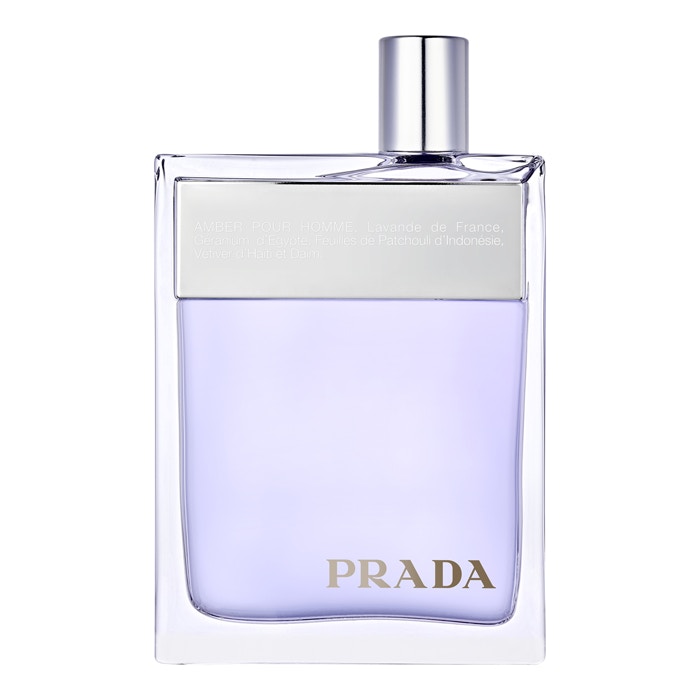 There are 176 reviews of Prada Amber pour Homme by Prada.

landshark321
Show all reviews by landshark321
Today marks my long-overdue sampling of the 2006 release, Prada Man, also known as Prada Amber Pour Homme EDT, its characteristic purple juice being recognizable in the market but a designer release that Im somehow avoided, and in short, its great, a soapy fresh amber thats a satisfying borderline signature scent-type. Its fresh with citruses and orange blossom, earthy/woody with vetiver and patchouli, and a touch sweet with tonka and vanilla. It does, as its advertising suggests, seems somewhat referential of a fougere and traditional mens cologne, being somewhat on the sharper side of both, but not too sharp to be prohibitive, especially when most of the elements feel connected and well-blended. Even with the fougere and cologne archetypes in mind, its not overly masculine to me, but rather agreeable in the way that mens fragrances tend to be nowadays.

This is a strong performer for a contemporary designer EDT, and is quite reasonably priced on the secondary market, under $60 for 100ml on FragranceNet, so Ill have to pick up a bottle, as its an instant winner for me.

#242594
M
Mvp910
Show all reviews by Mvp910
Sheesh. Caught in the middle with this one. I hava a mini splash bottle I got as a free sample in a prada store in the mall. It just seems too powderey for me. I do love soapy scents, and I agree this is a pretty soapy, but just too feminine for my taste right now.
#225446

freewheelingvagabond
Show all reviews by freewheelingvagabond
Cool-warm and reassuringly suave, Amber pour Homme is a fresh oriental with notes of saffron, myrrh, vanilla, spice and floral notes. Clean, soapy with a touch of powder, Amber drifts in and out of shapes, but always hovers in the space between soapy fougeres à la Sung Homme, and heavier fresh-orientals such as Montblanc's Individuel. It's largely linear, and there's a subtle bitterness that persists throughout to counterbalance the array of fresh-sweet notes. There are some common tones with Narciso for Him, especially the musky facets of Amber, but Narciso is much more musk-focussed, and decidely gloomier.

Prada/Andrier revisited this work later in Amber pour Homme Intense, which is deeper, more tailored, and arguably more refined. Amber pour Homme doesn't reinvent the wheel, but reimagines the classic masculine staples of yesteryears in a contemporary fashion, not without a touch of androgyny.

2nosedtwin
Show all reviews by 2nosedtwin
Amber pour Homme - Prada
A old-skool vibed perfume with a classy cologne opening and a soapy and powdery feel. Reminds of Aqua di Parma cologne. Totally loses its focus and richness towards the dry-out and settles in a lush and clean but thin amber-base with a airy peppery-safron, a cool myrhh-feel and a leathery touch. A kind of confused and shizofrenic scent that doesnt deliver what it promises, like 2 different scents that dont come together. Good raw materials nevertheless.
#218644

mistersurgery
Show all reviews by mistersurgery
This is a very confused scent. There are some scents that are unisex, but this is not one of them. This is a femme-y masculine scent. It tries to be masculine through it's woody-ish base, but then is very sweet and powdery at the same time. The visual equivalent to this fragrance would be Sean Connery in a sundress.

It is pleasant enough. The grape leaf is a bit off-putting for me, but it dies down after a bit and then leaves you with a powdery, sweet (but not gourmand sweet) smell that reminds me of what you might find in a feminine hygiene product. Mugler Cologne (2001) did the "luxury soap" thing right, five years before this was released, and I don't see this as any spiritual successor to it. I could best describe it as being soapy, but not in a clean way. It's a little more on the cloying side. It becomes much more palatable as it dries down, but it still rubs me the wrong way, which I think is due to the norlimbanol that Zealot Crusader aptly pointed out in his review. It creates this constant irritant effect to the very soft, powdery side that exacerbates the already semi-schizophrenic profile that this fragrance has.

It's not bad, but I just don't know who this is for. This scent seems to suffer from some kind of fragrance gender dysphoria, and not only can I not tell who the target market is for this, I don't think I can describe what the point of this fragrance is. It's almost as if the point was to toy around with androgyny for its own sake. I have no idea and I'm left confused about how to feel about this scent, so I will give it a neutral. The bottle and presentation are fantastic, though. Too bad it was wasted on a fragrance so disordered as this.

Varanis Ridari
Show all reviews by Varanis Ridari
Prada Amber Pour Homme (2006) is the male counterpart to the reboot of the eponymous Prada perfume (2004), and originally went under the name Prada Man in some markets. Later, this formula was universally named Prada Amber Pour Homme, and had hands-on development from the granddaughter of Mario Prada and current head designer Miuccia Prada. In her own words, she said "I just tried to imagine what I would like if I were a man", and some of the perfume community inside jokes that followed include being made by a woman that secretly wants her man to smell like she does, and other such absurdities due to the fact that this scent is unsurprisingly not a macho stink juice. What is present in the rather classy bottle is a lilac-colored liquid which sits fairly square with the trends of the early 2000's: sweet, clean, sharp, soapy, mildly-aromatic and blended to the point of being nondescript. Prada Amber Pour Homme represents one of the earliest incarnations of the "sweet woody amber" genre that would later dominate the 2000's alongside the second wave of aquatics, laying to rest shrill ozonic citrus scents and fresh fougères still carrying over from the 90's. Most woody ambers from this decade had a touch of gourmand sweetness without going full-tilt gourmand like Thierry Mugler A*Men (1996), and Prada Amber Pour Homme is no different. The most prominent characteristic of this scent to my nose is the slight "grape accord" that I feel this lifted from Versace Man (2003), but took away from the sweet tobacco direction of that scent and moved into something drier and soapier. Overall, Prada would seem to have a love affair with soapy masculines in the same sense it does with candy-sweet feminines (literally having a scent named Prada Candy from 2011), and this soapy soiree starts here.

There are a lot more published notes in the official documentation than what I detect, so I'm ignoring them. With that said, the opening of Prada Amber Pour Homme is mandarin, bergamot, cardamom, and a grape leaf accord which imparts the "grape drink" smell, although it's much less-evident than in Versace Man, and soon switches into something far different from that as the heart of pelagorium, vetiver, and neroli steer this into the soapy finish this juice is known for among most enthusiasts of the scent. Clean, fresh, and inoffensive without relying on any metallic aldehydes or aquatic notes is the way of Prada Amber Pour Homme by this middle phase, although I get very little actual amber from this so it is something of a hilarious misnomer to me as well. The base tries to fancy itself as a semi-oriental fougère hybrid with tonka, labdanum, vanilla, olibanum, and an early implementation of norlimbanol, which provides the somewhat scratchy and dry wood finish the perfumers list as "sandalwood". Norlimbanol would come to be fashionably overdosed in the 2010's, but here it slips under the noses of most since it is just blended in with the labdanum and olibanum so well to give that woody incense finish perfumer Daniela Andrier was likely after to help this find some masculine footing late in the wear. The overall accord is soft and almost like cotton candy at first, then it blossoms into that marvelous hotel soap before going into the modern aromachemical "woody amber" base that those familiar with 2010's iterations of the genre know all too well, but applied lightly with a deft hand as to not be annoying. I like and appreciate what Prada Amber Pour Homme does, but I don't understand the hype this scent at one time had, even if I do think it is a perfectly suitable signature for somebody looking to make an understated nearly gender-neutral entrance. Prada Amber Pour Homme feels very much built for the office or casual gatherings, and that is where I'll recommend this be used. Wear time is average for an eau de toilette, and sillage is moderate as per the trend of the decade.

Guys who are staunch about their mossy green aromatics or heavy animalic spices need to look elsewhere, as this is clearly made for the heterosexual man of the "metrosexual" persuasion when it was fashionable in the late 90's through mid-2000's. As a gay man myself, the sky's the limit where gender in perfume is concerned and I find masculine-marketed perfumes from this period with such "faux-effeminate" leanings to be the equivalent of when Taco Bell facetious tries to pass itself off as authentic Latin cuisine in parts of America where the local yokels don't know better, but in that there is some naive charm so I end up liking it anyway. Besides, who doesn't love Taco Bell at 1am? In short, I won't fault the stuff for following the forms of its day. In the years removed from Prada Amber Pour Homme's release, there are a lot of things that do the "soapy clean dry" thing a lot better than this does, and without the grape opening to boot, but I still like this enough to want to smell like it more than once. Whether or not you think Prada Amber Pour Homme is still relevant in an over-crowded field of masculine scents that it helped create is up to you, but the newer Prada Amber Pour Homme Intense (2011) would ironically come across as a powdery and more-traditional take on the same idea for those not too enthused with the original's sexual ambiguity. One thing's for sure, with the hype having subsided, you no longer have to worry about smelling like everyone else if you sport this, which also may be an attractive selling point. Overall, Prada Amber Pour Homme is a badly-named and slightly unorthodox take on the classic dapper gent clean scent, with a bit of unisex appeal thanks to its "metrosexual" intent, in a gorgeous lilac juice-filled rectangular bottle adorned with an etched silver plate that looks attractive even next to much more-expensive niche brand packaging. Thumbs up! J B A More

Prada Amber Pour Homme Intense - Has this been counterfeited ?

J
Do you get a lavender note in Prada Amber pour Homme?

What is this dominate note/accord in Prada Amber Pour Homme that reminds me of Tabac original?