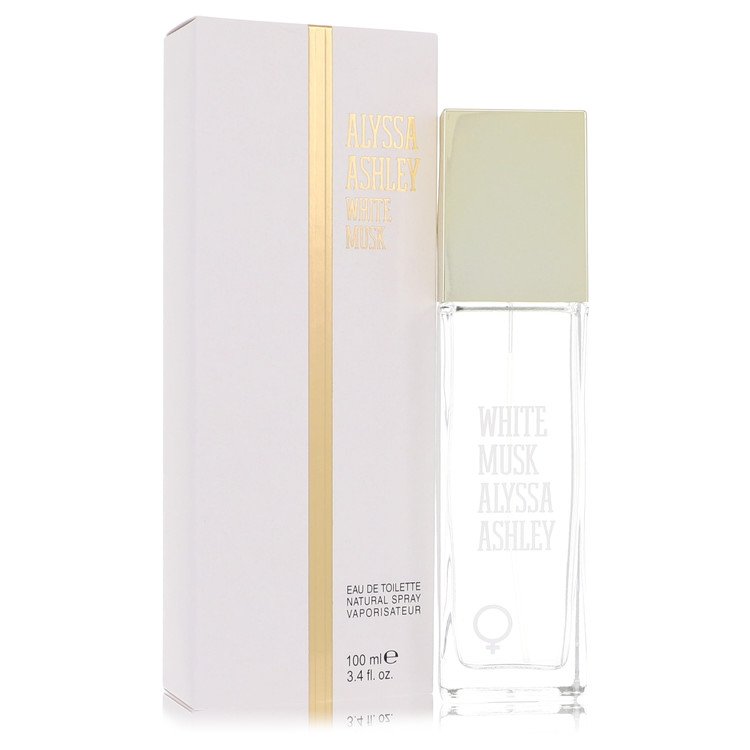 Varanis Ridari
Show all reviews by Varanis Ridari
Alyssa Ashley Musk (1968) is a benchmark in synthetic musk perfumes, rekindling interest in musk-focused fragrances among mainstream buyers who by that point had become used to chypres, fougère, orientals, and the like since the golden age of modern Western perfumery began in earnest at the dawn of the 20th century. Musk had always played a role in these more-complex affairs, whether naturally-derived from tonkin, civet, or synthetically-derived from various polycyclic musks discovered around the same turn of the century, but to have musk as the subject alone is something major commercial houses had not really explored. Then of course, something happened during the late 60's that suddenly resulted in a counterculture movement which wanted to shed itself of the rigid decorum and sexual repression that had defined previous generations, and the ancient sensual appeal of musk was suddenly desirable again. Of course, I'm not insinuating that Alsyssa Ashley is responsible for the creation of synthetic musk perfumes, just the "democratization" of them if you will, a word I'm borrowing and removing from the usually pejorative connotation it's given by classists who believe giving the hoi polloi access to perfume in the first place was a mistake. From the success of the unisex-marketed Alyssa Ashley Musk, that was made in cooperation with Houbigant's Parfums Parquet downmarket division, spawned a litany of copycats either also unisex or made in gendered pairs from other drugstore purveyors like Shulton, MEM, Jovan, Coty, and even mailorder darlings Avon in time. I don't hate this stuff, but it's like the olfactive equivalent to Wonder Bread after you've already gotten used to 12 grain for your sandwiches.

Others have noted what I'm about to say, but in case you haven't read any other reviews on this fragrance yet, let me make it clear that this is indeed more floral than musk. This fact, above all else, is the biggest deal maker or breaker depending on what you were looking for from this product. Back in 1968, with Monterrey Pop in the rear view mirror and Woodstock on the horizon, something like a perfume you could share with your bohemian lover was super appealing, and in some ways informed the creation of the truly androgynous floral musk of Calvin Klein cK One (1994) 26 years later, although cK One would never have the accessibility of Alyssa Ashley as it was a designer with a designer price tag. Similarly to cK One, Alyssa Ashley opens with a soft sort of white florality but minus any citrus tones, instead going with jasmine and violet superimposed over an orris note probably cobbled together with ionones due to the low cost of the stuff. There's a bit of something powdery and sandalwood-ish here, but much beyond that, you're bombarded with fluffy white musks and a bit of carnation, having only the very slightest bit of skank deep down in the skin feel to make it "sexy". Since Houbigant helped design this particular musk formula, they also re-used it in Monsieur Houbigant that would later be more-appropriately named Monsieur Musk (1973) after that musky base riff was beefened up. Wear time for this one is about 7 hours and it is perfectly unisex, smelling mostly like hotel soap and clean linens, which imparts no gender to my nose. Best use here is probably as a bed time scent, although I'm sure hippies obliviously shagged in this aplenty back in the days before the Kent State shootings radicalized them (and for good reason).

If you're looking for the ambery spicy facets of real tonkin musk but on a budget via a synthetic vector, you're safer picking up something from Jovan, who really did the best possible job delivering that "Egyptian Musk oil" vibe on a shoestring (despite even it having limitations that I don't like). I feel that in time, Alyssa Ashley would grow to become more worn by women than men, as that underlying floral tone would be a deal breaker to the macho-types looking for mossy green or pissy leathery varieties of man stink devoid of the unerring pleasantness that limits the virility of whatever musk is actually in this fragrance. Also of interesting note, besides Parfums Parquet making Monsieur Musk by reusing the same musk compound, later parent of Alyssa Ashley IPD fragrances would also make the Alyssa Ashley Musk Extrême (2009) pure parfum flanker before going defunct (although their 90's website in pure HTML is hilariously still online) and selling the brand to The Perris Group. The Perris Group, who was in the process of developing their own niche prestige line called Perris Monte Carlo, would infamously dry run budget versions of several formulas that would later appear as Perris Monte Carlo fragrances under the Alyssa Ashley brand in European drugstores (but nowhere else), and one of the formulas chosen for reworking into the launch line-up for the house is the one used by IPD for it's pure parfum version of this by now tired old 60's floral musk. So yeah, if you're looking for a "niche version" of good old Alyssa Ashley Musk, that's actually out there. For everyone else, this once-provocative now-pedestrian holdover from the days of free love is waiting for you at a local pharmacy, likely in a locked glass cabinet next to the makeup. Neutral

My first impression is that this is pretty much a straight-up clean musk, but it does have subtle nuances. In the beginning these nuances are overpowered by a kind of "starched white linen" accord, like freshly-washed laundry being ironed. After ten minutes or so however, I pick up a hint of baby powder, some florals, perhaps rose, & a trace of citrus. Two hours in, the laundry accord fades away, & the scent slowly sweetens into a powdery vanilla base. The projection opens strongly, & quickly fades close to the skin, but it's still going softly after twenty hours.

I'm sure this one has been reformulated since its release, but I was still hoping for something more sensual & suggestive of musky skin. It's possible that I'm anosmic to some of the musks being used here, but for me it would make a good "office scent", or something to wear after a bath when you just want to feel clean. I might try using it as a linen spray.

This has the same clean musk/fresh laundry/baby powder accord as the EDT, but it's softer, less sharp, & the citrus & floral notes are far less apparent. Ninety minutes in, there's a cool, crisp, mineral & slightly floral feel, but from here it's very soft indeed. Around the three-hour mark I get a sweet, almost coconutty vanilla, but six hours in it's barely there.

I know that oils tend to wear much closer to the skin than alcohol-based fragrances, but I expected better longevity than this. For that reason, I think I prefer the EDT.

Darvant
Show all reviews by Darvant
A soft floral fragrance which remains one of the white musk-references par excellence. Alyssa Ashley Musk is all about floral delicate white musk, powdered down by iris, violet "dust" and woods. Opening is kind of classically chypre with earthy, piquant, woodsy and leafy accents vaguely conjuring (just for a while) diverse types of perfumes (in their top stages) as Morris Gocce di Napoleons and (on a certain extent) La Perla. Gradually the juice evolves towards a more typical "status" of delicate and dreamy white musk a la Jovan or The body shop White Musk. Faint longevity on my skin.
#207265
S
StinkyPetunia
Show all reviews by StinkyPetunia
This was a pleasant surprise. I got a vintage bottle from when it was sold under the Houbigant brand. It smells absolutely amazing: a very mellow, smooth musk without any unnecessary complexity added. It layers really well with other scents.
#192621

Poppinj
Show all reviews by Poppinj
This has been around for ages and is readily available at most US drugstores for a relatively low price. Non offensive, clean, crisp and linear. Stays close to the skin with a very soft projection. Alyssa Ashley Musk is unisex, but has a tendency towards the feminine with a slightly artificial powdery floral note. The opening is perhaps my favorite part of the experience and I'm reminded slightly of vintage 'My Sin Eau de Lanvin', which is LOADED with various musks, although of much richer quality. It's an 'okay' scent, but not outstanding in any perticular way......
#182934

I suppose the first things I noticed after applying Musk Extreme was that it immediately performed like a conventional Eau de Toilette and it possessed a slight hairspray accord. Does that mean it was an instantaneous deal breaker? No, it wasn't off putting because the hairspray aura wasn't sharp like some can be, yet is it evident.

Am I saying that I like it? I can't say that I do, but I don't hate it. I have a few fragrances by Alyssa Ashley that I wear, but this particular one leans far too feminine for me and it's also one I cannot generate any love for. It goes on oily as well, so expect some topical residue for awhile. This may well be one that interacts better with some sort of base, but I have neither the time or inclination to experiment.

When I wear "musk", I guess I expect a sensuality to be present or at least some type of animalic aspect augmenting the surrounding notes. Unfortunately, I don't realize that with Musk Extreme. There's a warm, herbaceous and spicy quality present, along with some sharper, floral elements that create the hairspray comparison. I cannot help but mentally correlate the aroma to "drugstore".

Normally, I enjoy breaking a scent down to explain what notes are doing what for me as I wear it. I won't do that here since the above is basically what I experience through the life of the scent, with the exception of a mild vanilla peeking through in the base and beyond. Sillage is average with longevity approximately 4 hours on my skin with heavy sprays. It does last longer as a skin scent. Neutral rating from SS for Alyssa Ashley's Musk Extreme and as always, a sample wear is highly recommended.

Other perfumes by Alyssa Ashley No members currently have Musk Eau de Toilette on their wishlist.