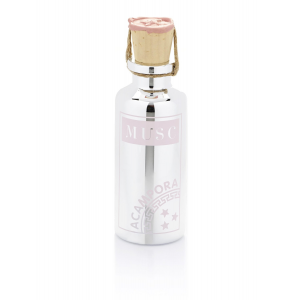 Add your review of Musc

Reviews of Musc by Bruno Acampora

There are 12 reviews of Musc by Bruno Acampora.

lala77
Show all reviews by lala77
It smells like a classic, rich musk-- but with something rank sitting at the top of it. That sharp, stank is very prominent to my nose. It's like dirty feet or rancid cheese. I almost washed it off. I won't be buying this one.
#268168

Colbourne
Show all reviews by Colbourne
Musc opens with the ether of humus, the decomposition of leaves on the forest floor, layers of humid oak leaves on a damp autumn day, mushrooms pushing through the soil with glistening caps. I picture red efts, these tiny vermillion newts, as they wander through the moss and loam.

To what others might seem dank to me is exhilarating, but for even those who might be intimidated by this opening, give it just a bit of time for the dry down to reveal itself. It transitions into this beautifully moorish musk, ensconced in premium powder, the slightest waxiness, animal undertones, with echoes of the earth and astringency folded into sheets of sandalwood.

What at once seems feral now purrs, albeit seductively, detectable as an aura for hours, likely leaving you smelling like the sexiest man (or woman) of the woods, treading the line between the clean and the dirty.

rogalal
Show all reviews by rogalal
This is a bit of a weird review, because I've only tried Bruno Acampora's Musc as a candle and in its EDP formulation - I've never had a chance to wear the original iconic musc oil from the 70's.

The candle is nice, but uneventful. If you've smelled cheap "Egyptian musk" oils, it smells like that - sort of a sweet hippie vibe.

The EDP version is terrible. It's basically an especially woody "woody amber" perfume. Imagine something like Dior's Sauvage (woody aquatic) but with the cypriol dialed way up, so there's an exaggerated artificial woodiness. The musk comes through more as a general sweetness than the focus, while the focus is on an Axe-style chemical base. Unless you're a diehard fan of men's designer scents looking to spend well over $200 on something you should be able to smell like for much less money, I wouldn't bother.

Hopefully, I'll get my hands on a sample of the 70's oil at some point and figure out what the fuss is all about, but by all means, skip the EDP. But for now, I'll vote neutral because at least I enjoyed the candle...

Starblind
Show all reviews by Starblind
Acampora's Musc the only patchouli-prominent fragrance that I really love. Perhaps, in part, because the patchouli note is leavened and made much more fascinating by the addition of clove and rose and sandalwood. The oil version wears like an attar and starts out with a surprisingly fungally mushroom scent that rather quickly evolves into something bewitching: an incredibly sexy forest floor. Now, it smells slightly rooty and spicily mossy, with its dusty vegetation filtered through an autumn afternoon's sunlight. There are still hints of the mushroomy patchouli and an absolutely divine and sort of "fuzzy" 3-D musk unlike any you've ever encountered. It's elven in its magic and somehow both vegetal and sensual at the same time. It's an ambrosia fit for tiny forest dwellers or gorgeous, androgynous gypsies.

Spicemeister
Show all reviews by Spicemeister
A hesitant thumbs up and not a neutral rating because it's a good creation and some people may like it. There is some muskiness to it, though I didn't find it very pronounced. The musk is on the white side, vaguely chalk-like but not powdery. The scent reminds me a bit of a marshmallow. A slight peppermint-type note, possibly the clove, and a tiny bit of what may be the violet come through. Other than that, I can't distinguish any other notes. Some might call this a skin scent, as it doesn't really project on me. However, it's a comforting scent. Review from a vial sample.
#153451

This is a dirty musk, and by dirty, I mean not fecal nor animalic, but literally of, or from, the dirt.

Two quick sprays to the forearm. I get Musk, rose, ash, leather, dirt, cardboard, pepper, and more dirt. There is a green, celery note. And an oily, only slightly animalic musk. After a bit, a peppery tobacco notes comes forward to join the dirt. There is a sharpness to the scent, which must be the clove. 1.5 hours in, the rich, somewhat fruity rose note comes forward, blending well with the clove. As the scent develops, there is little change. The green celery note disappears eventually, but the other notes soldier on, in approximately the same proportions. There is a vaguely woody note in the background, but nothing recognizable to me as sandalwood, and the vanilla is so low key as to be nearly absent--a good thing, imho.

The principal note, the musk, remains as described–dirty, oily, organic, but only slightly "animalic." Projection is moderate, and longevity at least 16hrs.

Verdict: This is a WINNER. Fall, Winter, Early Spring.

J
JackTwist
Show all reviews by JackTwist
This is the opposite side of the coin from the justly celebrated Muscs Koublai Khan of Serge Lutens. That was animalic, dirty, and drop dead sexy with its heady warmth and honeyed depths.

Acampora's Musc is, to borrow adjectives from Barbara Herman's description, "sharp, earthy, green, camphor with a decided mushroom note." It certainly is complex and odd. For those who love green scents you could hardly get greener than this.

It's not for me - too pungent, too sharp and green. I far prefer the Lutens, but to rate it objectively, it certainly is a fine musk and deserves a thumbs up.

The Ashley Houbigant White Musk and the Coty Wild Musk, popular drug store brands, contain hardly any of their title ingredient and should be avoided at all costs. Acampora's Musc is expensive - $220 for 10 ml of the oil and $135 for 50 ml of the edp. For the latter concentration it parallels the cost of the Lutens.

So far it would seem that the Acampora line has produced 10 scents in 40 years, stretching from this first hit in 1975. I'd be curious to sample his others, now that I've had a positive introduction to his first.
#145552

gimmegreen
Show all reviews by gimmegreen
Degree is the determining factor explaining why Bruno Acampora's Musc is special. The immediate impression it gives is of cheap musk oils available on the Indian market which try to approximate the smell of real musk. They manage to harness some of the warmth and sweet sensuality of the real thing and thus bear a passing resemblance  like a grainy video grab of the perpetrator. This Musc takes that odour profile and elevates it into a luxurious and well-balanced invitation. World of difference.
So apart from this being an accomplished realization of the musk note of a particular pedigree, I should also point out a touch of salty spice (cloves, but not too clovey), some dry amber and quite an earthy, woody patchouli that marries well with the musk.
Review is for EDP.

Buzzlepuff
Show all reviews by Buzzlepuff
There is a strange attraction to musk and the title Musk denotes somewhat of a mystery. What is musk, really? Originally musk was taken from the Musk Deer which unfortunately was obtained from the testes of the animal and then diluted considerably to get to a pleasant fixative perfume ingredient. Today synthetic musks have replaced the animalic musks but they still have that undefinable alluring fuzzy sweaty skin scented, sexiness to them that elicites such an allure and hard to understand attraction.

The musk part of Bruno's Musk smells to me like a babies skin. The other notes added to this Musk are: Rose, Violet, Vanilla, Cloves, Amber, Sandalwood. All of these are used very sparingly and the subtlety of this musk represents astounding restraint in use of defining elements allowing the musk to stay in the center stage. At times I smell some slight rose and I can notice where violet might fit in but really don't smell those notes at all most of the time. The whole is its own subtle but magnetic attraction musk and I find it very nice to wear.

The only other musk that I think has some similarity is By Killian Musk Oud. However, Musk Oud is stronger by a large margin in the use of oud and rose but the musk part has some similarities to Bruno Acampora Musk. Mixing very well with personal chemistry, this musk is neutral, natural and Nice!

lanvinelle
Show all reviews by lanvinelle
I love this musk! It's unique and not a "pure" musk.I can smell the mushroomy opening,the violet and possibly patch with the musk but none of the notes overpowers the overall "musk" effect.It smells clean and pretty and not so spicy on me.
I think it would make a great signature scent for those who search one.

R
rafaela
Show all reviews by rafaela
Darvant review of this wonderfull musc is spot on. It's not animalic like MKK, but clean and sophisticated, highly recommended for musc lovers.
#126238

Darvant
Show all reviews by Darvant
Yes, if you love the untamed, dramatic, warm, bold muscs any choice could be better of Bruno Acampora Musc. The most "muskey" musc I've tried, an almost agreeable and edible musc, something you wish to bite, chew and swallow despite its normal (normal for whichever musc around) powdery-laundry-green cloudy vibe. I've tested also the pure essence and it's an "ultra-sensorial" experience, the best musky journey you can dare to do, something different, oily, camphoraceous, mouldy, earthy and green. Musky vegetal softness, exotic breeziness, arcane fruity accents and commanding earthyness coexist in this legendary formula. There is a certain radiance in its powderiness, a soapy-floral "nursery kind" of fragrance and something arcane that conjures the childhood, the talc, the soap, the baby clean skin's aroma (but also the closed rooms, mushrooms, mouldy cellars, artisanal soaps, the "interior" of the ancient amphoras). This type of complex soapiness does not subdue anyway the floral sophistication of this juice aroused by a sort of "english style" clean rose-violet combo (a bit aqueous and toiletries type). The presence of tasty spices and soft balsams provides some ostensibly balmy (and "nectar" type of) softness mixed with a woody, rooty and slightly resinous sort of white dust. Projection is really impressive in order to be enjoyed by lovers of the perfumed long wakes. A very nice sensual and complex rosey-soapy musk.
#172702 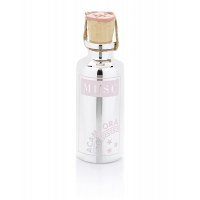