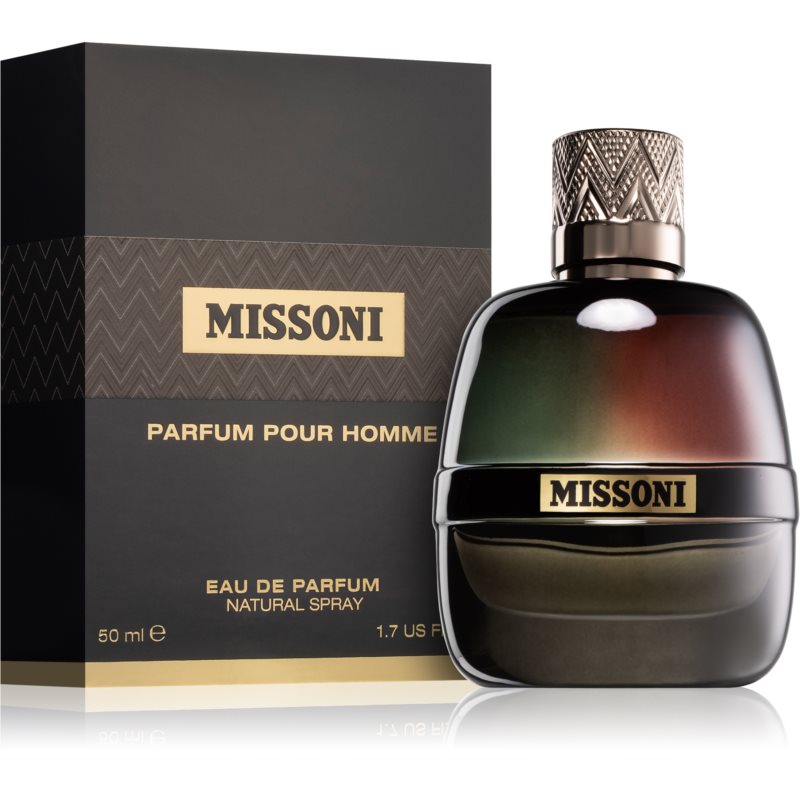 There are 9 reviews of Missoni Parfum pour Homme by Missoni.

5 Positive (56%) 4 Neutral (44%)
H
Hugh V.
Show all reviews by Hugh V.
This fragrance is deceptive. At first you get some bright citrus, that to my nose, that tries too hard to get you to like it. It's got this sweet-fresh thing going on, with what I'm guessing is a lot of lemon and maybe the grapefruit. It's not bad at this point, and even a relief to the harsh chemicals swirling about in stuff like Gucci Guilty and Allure Homme Sport.

Then it gets to the middle and you get a very subdued "dark blue" smell. A very, office-friendly, versatile take on Bleu de Chanel or Dylan Blue. It never gets into those two fragrances' territory of heaviness or spice. It's just the fainted hint of the genre's boldness.

When it dries down further and the base notes come into play, it takes on a slightly more nuanced approach. It's still kind of subdued compared to other modern blues, but it gains some additional character that makes it more interesting, and it's the best part of the scent. There's something small in this part of the dry down that reminds me of an old school 80s/early 90s scent. Just something small though, as it's definitely not trying to be retro or "mature". It's just a very versatile fragrance that I think anyone can wear.

It doesn't come across as "beast mode projection" at all, despite being labeled a "parfum." But that's fine for me because I don't want my fragrance to precede me.

CONCLUSION:
This is one is surprisingly good. Unlike most men's fragrances where the top notes are the best part, the reverse is true of Missoni. When the base notes come into play you get something really nice.


#238464
M
My2scentsWorth
Show all reviews by My2scentsWorth
I love this fragrance, but I find it just dissipates very quickly on me.

Very pleasant, complex fragrance that develops very nicely, but basically becomes a skin scent on me within an hour. Just wish it had better sillage and longevity, then I'd give it an enthusiastic thumbs-up.

Varanis Ridari
Show all reviews by Varanis Ridari
Missoni as a perfume house has always made its masculines ride pretty close to whatever was trending highest at the time, and kills off whatever the previous masculine is at the time in favor of the newest one following the newest trend, meaning there is only ever one being sold at department stores at a time. Missoni Uomo (1983) was not unlike many of the leathery aromatic fougères rummaging around at the time, Olympios (1994) sat somewhere between an aquatic and Dior Fahrenheit (1989), while Noi Uomini (1997) was compared to Dolce & Gabbana By Man (1997) and Versace The Dreamer (1995). It had been twenty years since the last stab at a masculine fragrance, so trends had naturally shuffled around yet again, and Missoni decided to target the vibe of Bleu de Chanel (2010) for its newest masculine perfume. Before you write Missoni Parfum pour Homme (2017) off as another "me too" designer, which is admittedly easy to do with the way I just introduced it, you need to get your nose around a sample and see how Missoni finessed the "soft citric woody sweet ambrox" accord into something that is head and shoulders above offerings from more prominent brands that you've probably already tried and rejected. For starters, I get a much more mature vibe from this, closer to something John Varvatos would release, and most importantly, the base actually delivers something other than scratchy fake woods and ambroxan skin warmth. What's also unusual is the dark rounded look and heft of the bottle, like they knew this was going to be an alternative from all the banal cylinders and rectangles that litter stores like Macy's and Nordstrom.

The opening of Missoni Parfum pour Homme is a real stunner: pink pepper, grapefruit, lemon verbena, and lavender offering a very 1980's sort of soapy fougère vibe similar to Drakkar Noir (1982), but quickly moving into the resemblance of Bleu de Chanel when the heart emerges. Jasmine hedione mixes with a bit of violet but the dusty warm spice of Bleu de Chanel is absent, while the soapiness of the top is replaced with an inexplicable juiciness that eventually subsides when the vetiver and incense accord (the latter being norlimbanol) comes to reassert the likeness to the Chanel. The patchouli and musk vibe are a little more prominent in the Missoni than in the Chanel, and I don't get any of the legacy oakmoss vibe Chanel sneaks into the eau de toilette version of Bleu de Chanel, but I feel Missoni more or less targets the Eau de Parfum iteration of Bleu de Chanel as its primary source of inspiration anyway, but does a few switcheroos in the development. Birch smoke and a slightly more-rounded sandalwood vibe are the biggest surprises in Missoni, which brings in the aforementioned maturity factor, making this feel more "grown up" than the Chanel in the full-bodied presentation that replaces the sweetness. This is the perfect bridge scent for an older guy afraid to step away from his 80's or 90's fougères into something contemporary, and just a nice refinement on a popular ubiquitous style that makes it feel less-so because of it. Wear time is long but sillage is not extreme, so Missoni is more for the quiet confidence man than someone wanting to go "beast mode" into the office, and I'd say this can be a good generalist for virtually year-round use for that "one bottle" kind of guy. My only concern is long-tern tenability because Missoni is known for canning their perfumes without much warning if they don't sell.

This stuff won't convince someone who has fallen out of love with the 2010's designer vibe to come back into the fold, but will impress the people who think they've already smelled it all in this sector. I don't think this distinction will save Missoni Parfum pour Homme from the same obscure fate as its predecessors, since the market is even more over-saturated now than when they each landed years ago, but it will make fans out of people looking for something people-pleasing that isn't necessarily boring. Best of all, Missoni Parfum Pour Homme has all the quality and beautiful rich diffuse nature of Bleu de Chanel Parfum (2018) but without the upgraded cost, so it may be a good alternative for someone who likes the BdC Parfum but doesn't want to pay entry-level niche prices for what is still a designer accord, however nice of one it may be. All around, Missoni Parfum pour Homme is a great dark horse contender in the modern ambrox masculine segment that has all the smoothness, refinement, and maturity of a niche release, but all the affability, mainstream appeal, and wearability of a designer. Sure, you may not like the fact that it rides so close to Chanel in terms of overall composition, but stops just shy of being a clone by doing something different with the style Chanel can't offer, and that thing is refinement. Missoni Parfum pour Homme just smells so ridiculously refined for a designer it has to be sniffed to be believed. Do yourself a favor and try it out, then buy in bulk if you like it before it becomes another discontinued unicorn like all the rest of the masculines from this house. Thumbs up!

speedracer
Show all reviews by speedracer
To me, this is very close to Bleu de Chanel. Very crowd pleasing, versatile, masculine, sweet and spicy. The scent doesn't change much from beginning to end.

Projection is very good with this parfum strength scent. My longevity was maybe 6-7 hours but I wore this on a hot day so it may have even better longevity in a cooler environment.
#218768

notspendingamillion
Show all reviews by notspendingamillion
Opens with a clean melange on grapefruit and fresh linen smell, like clean clothes. There is just a touch of lemon peel mixing in. It feels like an edp concentration. The citrus here sits and doesnt seem to move or sparkle. It is more of a clean citrus, not a fizzy sparkling one. Fairly nondescript and normal. Nothing to get excited about or trash on.
#217830
D
Dimitri
Show all reviews by Dimitri
Personally i find this one quite alluring. Overall the scent is citrusy fresh,especially at the opening. This fragrance can be worn at everyday basis, but be careful! 2-3 sprays will do the trick just fine. If applied more then the scent may become a little obnoxious. Mpph endures on my skin for about 10-11 hours and sillage is also very satisfying. While it is not mind-blowing, it certainly is a safe - nice option worth trying.
Overall : 7/10
#220959
Show more reviews of Missoni Parfum pour Homme...

Other perfumes by Missoni