About Lyric Man by Amouage

Where to buy Lyric Man 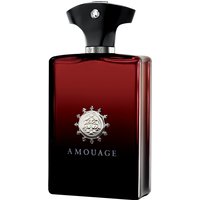 Reviews of Lyric Man by Amouage

There are 75 reviews of Lyric Man by Amouage.

clamnole
Show all reviews by clamnole
Beautiful floral-citrus opening. As others have stated, it's rose forward but not rose centric. I can detect the ginger which is always a prominent note to my nose, but it's soft. Dries to a more featured rose with hints of indistinct wood. Very nice middle. Vanilla edges into the later stages. I didn't go heavily on the application as I am used to Amouage's stronger offerings, so I never really noticed any incense or coniferous wood as I was expecting. Seems to be a lighter, drifting scent, entirely unisex and perhaps leans a little formal. A Christmas gift that I'll use well. Thumbs up for certain.
#238408

rbaker
Show all reviews by rbaker
The opening is a rich canvas of flowers, mainly risen, orange blossom, angelica with hints of muguet. Initially a touch of citrus and some bergamot are brightening it up, but the flowers rule.

Of all this floral opening bouquet the rose is the strongest, but it is not a rose that towers above the rest, it is rather integrated with the whole. A medium night flower, not light but also not very intensive, it is characterised by the lack of any significant stem or leafy component in it. A bit letter a bit of gingers spices if the floral array.

The drydown signals a shift towards a spicier side, with galbanum and nutmeg showing up initially, followed. These are quite slim, but a saffron impression, richer and smoother, is giving them more depth and texture. With the saffron a restrainedly powdery element is added in.

The later stages combines woods with spices. The woods are sandal and pine, with the sandalwood more perfunctory on me, and the pine Vers refined but rather weak - this is no pine-o-clean. The spices are mainly a musk that has a touch of a crisp and nigh-screechy component to it, as well as a musk that is comparatively mild. An incense of moderate intensity and a smidgeon of ceremoniousness arises more towards the end, but I do not get any camphor of medicinal qualities here. A mild vanilla accent adds just am the amount of well-dosed sweetness to provide the perfect balance.

This confident and self-assured rose-and-spice scent for cooler spring evenings is complex but not overloaded to an extent that it loses focus. The quality of the ingredients is impressive, and the blending quite refined, and the performance is satisfactory; but this is not a creation that sores into supreme heights. Overall 3.5/5.

#224019
S
Silencer
Show all reviews by Silencer
Hell no, just Hell no!

This is one of those scents where if it were made by a designer house, or really any other house than the venerated Amouage, it would be criticized off the face of the earth for being a frilly, womanly, pedestrian, grandmother's handsoap type of fragrance smell.

AOUD
Show all reviews by AOUD
Amouages Lyric Man first came into my possession as a sample card that a kind Ebayer gifted me with the purchase of a decant from a completely different house. Two years since then, and with my sample well-finished long ago, I can only thank this kind person who first introduced me to the house of Amouage. During my continual search for the perfect roseafter Diors Oud Ispahan, Montales Highness Rose, Amouages Homage and Tribute, Xerjoffs Zafar, and Malles Portrait of a LadyI remain haunted by this fragrance whose meaning has slowly revealed itself to me like the most cryptic and sacred poem, tinged with rose, pine, and musk.

The debate over whether Lyric Man is feminine or not doesnt matter to me much. I will wear anything I like. With that said, the following association ends up reverting back to gender anyways:

Lyric Man reminds me of smelling a young woman, fresh out of the shower, who is dressed in a light, flowing camisole and white cotton pajama shorts that do little more than cover a small part of her. Shes on your bed, brushing her still wet hair. At some point, you sneak in to give her a kiss on the neck before she falls over, laughing. As you start to travel down her body, from the back of her neck, where you kiss her again, and down her back, your face eventually reaches the softest part of her. You inhale through the thin, white cotton. Thats Lyric Man.

How this association still permits me to spray myself with glee every time I visit the perfume counter is due to the fact that I dont mind smelling like Ive laid in bed with the sweetest woman. One has to love the scent of fresh skin and intimacy. Bereft of the sultriness of romance, of wine and cigarettes and the night, or of mystery and libertarian indulgence, Lyric Man is for the poet whos now alone and ready to compose a few verses for his lover who he and the world can only smell as a recent memory.
#222696
J
JackTwist
Show all reviews by JackTwist
Lyric Man (2008)

Although not listed in the note tree, there is a subtle presence of oud in the woody supporting base notes, which eventually takes over and ruins Lyric Man for me. Oud is being used everywhere in scents these days and my nose simply loathes it. It has the effect of ammonia, acrid, bitter and repellent.

This is a definite thumbs down for me as the oud presence makes it impossible to detect any of the notes except the rose, which strikes me as dull and out of focus .

Add your review of Lyric Man

Members who own Lyric Man

Amouage Lyric Man Pre-Formulation Experience | Am I Smelling This Right?

Search for Lyric Man by Amouage on the Basenotes forums.
Top