About Luna Rossa Carbon by Prada

Where to buy Luna Rossa Carbon 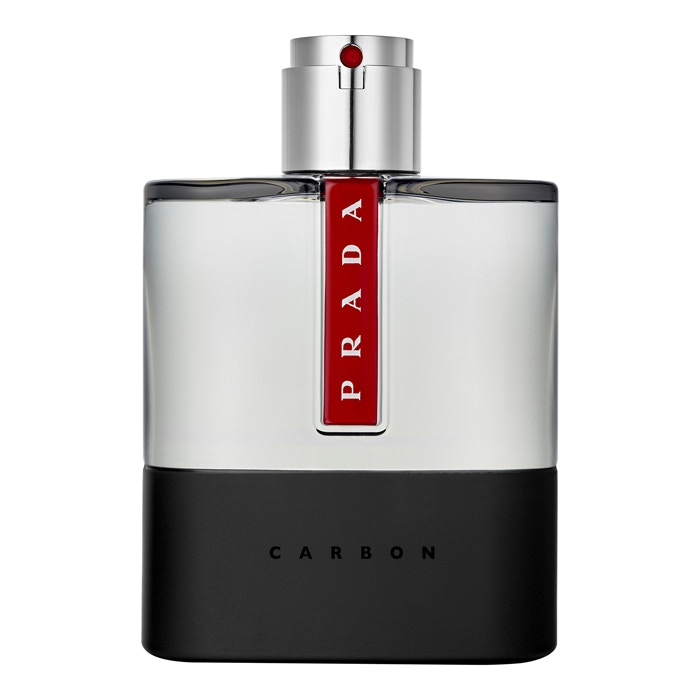 There are 18 reviews of Luna Rossa Carbon by Prada.

StylinLA
Show all reviews by StylinLA
I've never worn Sauvage, so not sure about the similarity to that scent.

I do like this one a lot. The lavender is nicely integrated and as Busyblind said, it conjures a shaving cream from the future.

Really enjoy wearing Carbon. A nice daily modern kind of scent. Not sexy, not romantic, just solid, clean, nicely scented. Probably would have burned through bottles of this if I was still working.

rbaker
Show all reviews by rbaker
The opening is bright: bergamot and citrus initially, soon laced with a restrained white pepper. A good start.

The drydown adds a lavender note that is agreeable at first, but develops into a rather bland form of lavender that peters out with time. There are more vivid lavender notes around.

The base adds a friendly and light patchouli that has an ambery undertone, is soft and lacks any edges.
Later on a nonspecific fruitiness is evident in the background; this retreats after a while closer to the end.

I get moderate sillage, good projection, and an excellent ten hours of longevity on my skin.

This scent for cooler summer days starts off all right, but soon develops into a rather generic and synthetic concoction. One cannot complain about the good performance. The bergamot, amber, lavender and patchouli are all ingredients of Dior's Sauvage too, and hence the two are often mentioned in the same breath, but Luna Rossa Carbon evinces less of the laboratory-created synthetic tedium that characterises Sauvage to sone extent. 2.5/5

onethinline
Show all reviews by onethinline
A dark, electric lavender backed by patchouli to create an edgy fougere accord thats both modern and a little bit of a throwback. Its big, bold, and really beautiful. I know everyone compares this to Sauvage, and while I get the tonal similarities (bergamot, patchouli, ambroxan), they really are pretty distinct scents. Sauvages opening is both sharp and airier, less grounded in dark lavender, and honestly with a less realistic bergamot, but with its peppery notes already in place. That pepper carries Sauvage quickly into its post-fresh drydown which is rough, peppery, a bit sweaty, and with a distinct dryer sheet puff effect. Whereas Carbon spends a lot of time in its rich bergamot-lavender mode, bolstered by patchouli and metallic accents, before sliding into a smooth patchouli dry down. It lacks the scratchy woody-amber base of Sauvage, and honestly beyond an initial family similarity, the two go down different roads.

Carbon strikes me as the smoother and more refined of the two, smelling a bit more natural, but it doesnt offer the Janus faces of Sauvages distinct fresh-then-rough transition. Sauvage has never read to me as a fougere, whereas Carbon certainly does. I like both, but while Sauvage is still a sort of bête noire for me that attracts and repels, Carbon pretty much just has me swooning. To me, a more apt comparison for Carbon is MFK Masculin Pluriel, as both are decidedly modern, patchouli-grounded takes on a fougere, and both feature beautiful lavender notes. Carbon is the richer and bolder of the two, however. Definitely recommended for those with modern/edgy sensibilities but sympathy for classic vibes.
#220945

Buysblind
Show all reviews by Buysblind
If I can imagine Hans Solo's cryogenic sarcophagus before it froze as this vat filled with a dark, liquid shaving cream like substance, and a dry-ice mist rising from the vat, then that mist and the liquid below it might just smell like Luna Rossa Carbon.

In the note pyramid for Carbon I see things like 'metallic notes' and 'coal' and a big hunk of 'ambroxan.' While I don't pick up on these notes individually, collectively they're very much there, and they're exactly why Carbon ends up smelling like some bizarre foam from the future.

Carbon also is very much a fragrance built around a singular accord (despite how many "notes" went into creating that accord). It's mostly linear, with this one singular accord persisting for its duration. Within it there are definitely traces of the Luna Rossa DNA. As with most "singular accord" scents, they really need to be smelled to be understood. However, if you enjoy Rive Gauche, Pascal Morabito Or Black, Sauvage, or Drakkar, chances are you might like Carbon. What do these 4 scents have in common? They all resemble shaving cream to varying degrees--Carbon just resembles one that hasn't been invented yet.

Overall Carbon is a solid composition and it brings something different to the table. It projects really well--I smell this all day while I'm wearing it--but it's never heavy or thick. And it lasts forever. This one will hang onto your skin for over 12 hours. Carbon has a slightly formal feel, if not sometimes a little cold and detached, and I think that's where some people aren't going to like it. But I just keep picturing Hans Solo frozen in suspended animation and remember that behind Carbon's sleek, black facade there's a person. In this case, just another guy, wearing a cologne, smelling good. Thumbs up with a final rating of 8/10.

Side note: I've smelled several fragrances with "Carbon" in their name, and out of them all, this one captures it the best.
#219897

Varanis Ridari
Show all reviews by Varanis Ridari
What would you get if you took Dior Sauvage (2015) and remade it as a barbershop scent? That's a not a question people really ask or one that anybody thinks really needs an answer, but Prada seemed intent on giving us that answer anyway. Prada mainstay Daniela Andrier took notes on what has made waves in the both the mainstream/designer segment of the male populace, and the more upscale/niche segment, smashing them together with Prada Luna Rossa Carbon (2017). Invasion Barbare / SB by Parfums MDCI (2006) and Penhaligon's Sartorial (2010) have brought back that "proper groomed gentlemen" wet-shaving aesthetic that seems to be popular among wealthier taste makers the style of whom always seem to trickle down inevitably into mass-market products. Meanwhile, designer perfumers are having a field day stuffing norlimbanol and ambroxide in heaps into anything they can with a citrus, fruit, and aromatic development, making these massively projecting beasts that are as polarizing as they are popular to say the least. Andrier marries these two concepts into one with Luna Rossa Carbon, making a barbershop scent built on the framework of a scratchy aromachemical "ambroxan bomb" as colognoisseurs call them. I don't want to be mean and call this perfume irrelevant, but due to the "design by Venn-Diagram" going on here, I kind of feel that the entire brief on this consisted of the words "pull the following off just to see if we can".

The opening of Luna Rossa Carbon begins as one might expect within this segment of the market, with heaps of that telltale "smooth" vacuum-distilled bergamot which has replaced the harsher (but truer) essential oils in masculines of old (thank IFRA), flanking it with a bit of citron and pink pepper to build it out. Once a few minutes pass, the norlimbanol scratch that gets this the biggest comparison to Dior Sauvage appears, but it is not as severe since it is forced to hold hands with an old-fashioned English lavender note, bringing in the barbershop recollections. A few inferences to Chanel Platinum Égoïste (1993) are made here as a metallic geranium note comes forward, no doubt the result of aldehydes of similar composure as those in the aforementioned Invasion Barbare. This metallic vibe also brings in comparison to Sartorial with the way the lavender plays with it to give off the "hot pressed suit" smell, but then the base of ambroxan and denatured "white patchouli" shows up to remind us that we are dealing with a designer scent and not a niche one. There is an interesting mineralic note in the base too, which gives the accord the "carbon" found in the scent's name, and that keeps the otherwise rich base notes from getting too warm. Prada Luna Rossa Carbon does scratch that barbershop itch and I love a good sharp lavender, but the rest of the scent is the same make-or-break harshness that will challenge noses not sold on modern aromachemical wizardry. Wear time is standard, with moderate sillage, and this is definitely a more office-friendly take on the "Sauvage smell" thanks to the conservative/traditional composition style. As with the original Luna Rossa (2012), this feels more like a sleeper hit to me than something which will get marred by ubiquity, but that also seems to be the way most Prada masculines go.

Was a more conservative or mature take on the "ambroxan bomb" style really needed? Probably not. This scent exists in a sort of paradoxical state because older guys still lamenting oakmoss won't go anywhere near it no matter how nice the lavender is, rich guys won't go anywhere near it because they'll just buy their prestige or niche barbershop favorites from their local boutiques, and the "dudebros" who like to roll around in the loudest chemicals allowed by the Geneva Convention will probably see this as being too "old fashioned" or even "dated" in spite its very 2010's framework underneath. Yeah, Prada Luna Rossa is the missing link nobody really wanted, and the alternative to a trend nobody really needed, so it will be mostly enjoyed by the guys who want to "dare to be different, but not too different", who think drinking RC Cola instead of Pepsi or Coke makes them seem just a tiny bit cooler than their "clueless" friends. For the pseudo-hipsters too scared to walk into a Lush or Art of Shaving, but too hip for a bottle of Sauvage, this is your juice. I like the stuff for being lovably quirky and fairly balanced considering its ingredients, so I give Prada Luna Rossa Carbon my approval, but this flanker is really such an inbetweener among inbetweeners that it may be redundant to buy for anyone that owns more than a half-dozen fragrances and has their bases covered by the multiple styles this tries to bridge, but fills its little self-made niche rather nicely if nothing else. Definitely the best of the Luna Rossa masculine pack, Prada Luna Rossa Carbon continues the classy left-of-center legacy began by the original Prada Amber Pour Homme (2006) over a decade before its own release. Thumbs up.
#221884

Cevenol
Show all reviews by Cevenol
This is just awful, why do I keep trying these things. Smells like.. I dont know man...
#209448
Show more reviews of Luna Rossa Carbon... Members who own Luna Rossa Carbon

Jun 22, 2021
Rook
R
E
What is the Advantage of Sauvage Over Prada Luna Rossa Carbon?

How different is Prada Luna Rossa Carbon than Dior Sauvage?

Search for Luna Rossa Carbon by Prada on the Basenotes forums.
Top