About L'Instant de Guerlain by Guerlain

Where to buy L'Instant de Guerlain 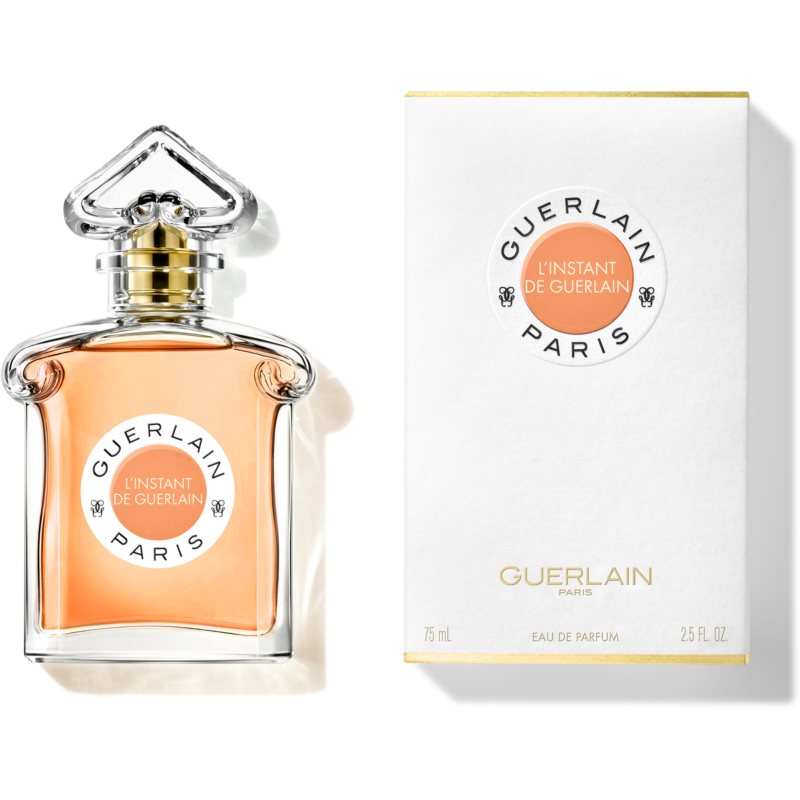 There are 58 reviews of L'Instant de Guerlain by Guerlain.

Abbiss
Show all reviews by Abbiss
I randomly tried l'Instant and Terracotta at the airport. One on one wrist, the other on the other. They both make me think of honeysuckle, vanilla and something savory in my mother's kitchen. L'Instant is more bitter but lighter. Terracotta has the same base, with coconut instead of vanilla, but performa better, feels sweeter and of course more powdery.
They are both beautiful but Terracotta is more worthy of my money.
#208669

Miss Hesta Jones
Show all reviews by Miss Hesta Jones
I understand what people mean when they say that this fragrance is lacking in character - it's very much an 'everywoman' perfume. I wear it when I want something oriental but light, when I really want the creamy Shalimar drydown with a prettier opening. Plus, the bottle is gorgeous and the juice is beautifully blended, of course. I could live without this stuff in my wardrobe, but it's a super-easy Guerlain, and I've room for that.
#184287

rbaker
Show all reviews by rbaker
The opening is a sweet citrus - not sweet as in overripe, but endowed with a sweetness that is based on added vanilla notes.

In the drydown the citrus recedes and ylang-ylang takes over as the main purveyor of the sweet component. Touches of white florals are present in the later stages, but quite faint compared to he vanilla and the ylang-ylang.

I get moderate sillage initially, limited projection and two hours of longevity on my skin, with whiffs of generic white floral and vanilla appearing on and off over another couple of hours

Pleasant in spring, is is somewhat bland after the first hour and hardly perceptible. Overall a tad too generic and performing rather poorly. It truly only lasts an Instant of Guerlain. 2.75/5.

Possum-Pie
Show all reviews by Possum-Pie
Opens with Orange Dreamcicle orange and vanilla. Dry-down to an amber with vanilla prominent, and Jasmine and Magnolia. Well done and definitely a feminine frag. Sits very close to the skin after an hour. Only fair projection. This improves with each sniffing. I'm giving it to my wife, she really likes it.
#176169

thediamondsea
Show all reviews by thediamondsea
A childhood spent in the American suburbs leaves you with some interesting hard-wired associations, and no matter how hard you try, you can never quite pry all of them out. So when I first smelled L'Instant de Guerlian, its particular blend of orange and not-quite-edible vanilla tweaked a couple of dormant synapses from my late childhood that brought forth a particular item from mall food court: the Orange Julius, a proto-smoothie thing that I used to sometimes drink in between bouts of Ms. Pac-Man at the arcade in Denton, Texas. These drinks were (sort of) blends of orange juice and vanilla ice cream and several other ingredients; I really don't know exactly what went into them. They really didn't taste that great after the first couple of sips, but I loved the way they smelled.

The idea works much better as a perfume, where the brightness of orange counters vanilla in a this lovely, glowing daytime scent. I detect the hand of creator Marice Roucel in this perfume's references to edible sweets, especially in its distinct honey note, which I recognize from his work on Hermès' 24 Faubourg. L'Instant takes a different tack from 24, however, in its slightly bitter and soapy qualities. These notes pull the perfume off the dessert cart and land it squarely on the bathroom vanity: L'Instant's vanilla base is emphatically not crème anglais.

Even though L'Instant comes loaded with tropical florals, its laundry musk says "daytime" to me. This may be a failure of my imagination rather than of the perfume; but, to me, it limits L'Instant's use to certain hours. It's also, probably, a little too noisy for work, at least in many environments. But it's a bottle of sunshine, and it wears like all the good Guerlains, with amazing tenacity and radiance. It's also, most emphatically, not expensive. L'Instant represents that most egalitarian of notions, the "pillar" fragrance--something intended for all of us. Even if L'Instant is not really my thing, I can get behind the idea--and I do like L'Instant much better than Dior's inedible vanilla monster Addict.

The problem of how to square this kind of egalitarian thinking with current ideas of luxury seems to have vexed the suits at LVMH past embarrassment. If you equate exorbitance with luxury, then it follows that most people can't have it. This seems to be the tack that Guerlain has taken, anyway. So, like a record company coasting on its back catalogue, they give the punters the old stuff, repackaged--but no new juice, unless it's hellaciously expensive and mostly unimaginative. Why does Guerlain's marketing department only aim at teenagers and dowagers? And when did they decide we're all rubes?

Sadly, I don't know if Guerlain knows how to make a perfume like this anymore. I also suspect the house does not want to, even if it could.


I finally smelled Terracotta, and it turns out that it's L'Instant's base, with something sort of coconutty added. So my last statement was wrong, in the most cynical way possible.

I still wouldn't drink it. Members who own L'Instant de Guerlain