The first male fragrance by Jean Paul Gaultier. The bottle is in the shape of a male torso and packaged in what looks like a baked bean tin. The bath products are shaped liked paint tubes.  The prestige version of the fragrance features a 'bulb puffer spray'.

Where to buy Le Mâle 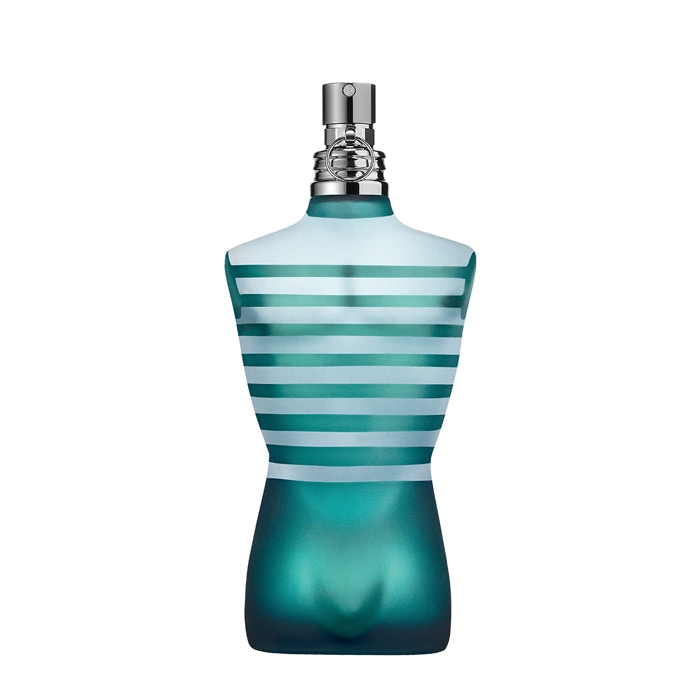 There are 332 reviews of Le Mâle by Jean Paul Gaultier.

rogalal
Show all reviews by rogalal
After all these years, I can say with full confidence that I just don't like Le Mâle. It feels good to finally get that off my chest...

I think almost everyone knows what this smells like by now, but if you don't, it's basically a lavendor/tonka fougere, sweetened with vanilla, cinnamon, and coumarin, kind of soapy and powdery, but kept from turning into a gourmand by a mix of exhaust-fume terpines, bleach, plasticky diaper musk, and smegma.

It actually kind of reminds me of Shalimar, but if Shalimar were reimagined by a punky gay weirdo who thought it would be funny to get unsuspecting people to wear a classic musk perfume that uses bleachy dried up sperm instead of musk. As such, I get the joke, and I acknowledge the artistry, and the wink-and-nod to history, and the iconoclasm. But I still think this smells nasty.

speedracer
Show all reviews by speedracer
Quite sweet and powdery to my nose. A defining metrosexual fragrance. I had Cuba Gold before I got to sample this classic from 1995, but the dry down is very similar. The opening of Le Male is better and so is the performance, but otherwise, you get the same powdery sweet lavender plus vanilla/amber combo that's been working its magic for decades now.

The current formulation has decent projection without being too loud and lasts 7-8 hours.

Vit
Show all reviews by Vit
Started as a teenager and have been wearing it ever since. Le Male has a strong cinnamon vanilla and lavender note, creating a scent to make women weak at the knees. My signature!
#223366

notspendingamillion
Show all reviews by notspendingamillion
Its got a nice mix of lavender, vanilla, mint thing going on. It becomes an accord to me, melding together to smell "le male"ish. Powdery, synthetic, sure. If it didn't have that terrible bottle I'd own it. Performance is good. A respectable fragrance.
#221869

Lynn Faust
Show all reviews by Lynn Faust
I was looking for something different, no Le Male at all, but began to test several fragrances at a local Belk. I got to Le Male and thought. It smelled like something I already have, Body Kuros. I do not know if BK has been reformulated but my juice in over a decade or so old now. So my nose, from both, gets a spicy sweetness. It is ok, but not something I would want to wear. I only wear BK a couple times a year. I cannot speak for longevity but the initial power is strong. I do not like the sticky sweet of it but others may find this appealing.
#219920
G
Gambrel33
Show all reviews by Gambrel33
JPG is awesome simple as that. Sure it has its time and place, i like to wear it when its a little chilly out with a descent outfit for going out. just like 1 million and invictus etc the frag will have its haters. But like i say, if your goal in a frag is to get noticed and get compliments then this is one of those. I guarantee anytime you wear it someone or several people will stop and ask what your wearing or tell you "omg you smell so good". Isn't that the point afer all?
#218531
Show more reviews of Le Mâle...

Add your review of Le Mâle Members who own Le Mâle