About Interlude Woman by Amouage

Where to buy Interlude Woman 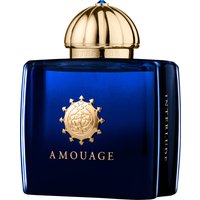 Reviews of Interlude Woman by Amouage

flathorn
Show all reviews by flathorn
I have a love/hate relationship with Interlude. But thats because the Amouage dna mostly doesnt work for me, and Interlude is one of their few that does. But I dont always like it.
Sometimes it feels salt of the earth, warm, mellow and solid. When its working for me and the helichrysum is in balance with the other notes, its a comfortable and pleasant fragrance, and has a certain beauty. At other times it becomes stolid and clunky when the helichrysum amplifies too much, and its dusty, brown sugar, nutty quality takes over.
Its a well-made fragrance though, and hangs together well. Interlude has a respectable, solid drydown, which is worth a lot anymore and really counts in its favor.
Ive resigned myself to a decant because I cant go further with it.

#247706
E
eamaccready
Show all reviews by eamaccready
This is a beautiful and interesting fruity incense and immortelle scent. The opening is a bit strange and dissonant ( which I've heard is intentional) and it took me a couple of wears to get used to it, but I love it now. It settles into a very interesting kiwi- incense-heavy oriental type scent that is very unique. I definitely detect the notes of kiwi, walnut, heavy frankincense and immortelle a lot. Given the latter two, this is definitely recommended as a winter/ cold weather scent. It is a powerhouse so that is another reason to use it that time of year, as a couple sprays is enough and it lasts all day. I actually DO NOT RECOMMEND wearing this in the summer. I thought I hated it the first time I tried it because I tested it in July the first time and it just became a giant kiwi/immortelle bomb and I had to scrub it almost immediately. I decided to give it another chance in the cold weather and I'm so glad I did. I now find it quite unique, cozy, elegant and delightful.

Gambino78
Show all reviews by Gambino78
I am extremely surprised many people say this is a lighter and less powerful version of Interlude Man.

To my nose it has nothing to do with one of the most complex scents ever made, called Interlude Man. It is not even close to it.

apixiefan
Show all reviews by apixiefan
Fundamentally, its a kiwi-centric fragrance, surrounded with woodsy notes, green notes, coffee, flowers, and God knows what else. And its sooooo damn delicious. When everything dries down and you pop the cap, the next day, it smells like organic kiwi and incense. Just beautiful...
#197669

odysseusm
Show all reviews by odysseusm
This is an intriguing scent, largely due to the helichrysum. This flower has a distinctive scent, often described as a combination of "burnt sugar and ham." That is exactly what I find in this scent.
It starts with a soft and attractive note, and is slightly sweet at this point. Smoky, a bit of ginger, toasted nuts, ever so slightly gourmand perhaps. The scent becomes substantial but is not heavy. It is rich but not cloying, and has a somewhat haunting aura due to whiffs of incense. Hints of wood and a sort of leathery note. Not quite my style, but I can admire the craft and elegance here. The nutty sugar note of the helichrysum may be an acquired taste.
#160106

farang
Show all reviews by farang
One of my favourites from Amouage. Interlude Man is too much - it is loud and unfocused. Interlude Woman however, is much more balanced and better put together.

It opens with a blast of bitter-green-woody notes and soon develops into a heart of dusty-sweet-spicy immortelle. I am always sceptical of immortelle since it is a powerful and dominant note, but in this case it seems to be under control.

The fragrance is long lasting and completely unisex - I cannot detect anything feminine about it. And since it better balanced and composed that the Interlude Man - I'll go for it.

Add your review of Interlude Woman Members who own Interlude Woman

Search for Interlude Woman by Amouage on the Basenotes forums.
Top