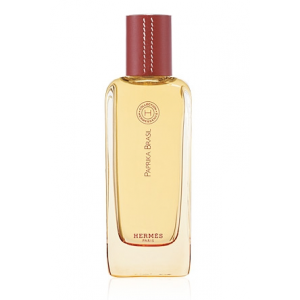 There are 18 reviews of Hermèssence Paprika Brasil by Hermès.

Oviatt
Show all reviews by Oviatt
Paprika Brasil is a bit of an odd fish. It does not smell so much to me of the peppers and wood of its name. The iris note is there but smells more to me of violets and hawthorn. Another reviewer suggested that this is close to Fahrenheit, which I can see, but this reminds me even more of Grey Flannel--a darker, slightly spicy Grey Flannel. All of that said, the iris note skews this to the feminine side for me. I am not an unreserved fan of Ellena's work for Hermes and while there are a few in the Hermessence line that I like--Poivre Samarcande being my favorite--this is a neutral for me.
#220807

Kitty2Shoes
Show all reviews by Kitty2Shoes
Don't let the name fool you - this is iris and loads of it. Jean Claude Ellena said of it: A tinctorial wood to colour fabrics red, brasil wood' gave its name to the country. With its power of suggestion, bois de braise sparked my imagination and I chose paprika to illustrate it. By mixing and matching, I recreated its scent, which is more secretive and discreet than its taste.

The name is incredibly misleading for most who might even want to give this a sniff. It's really more of an iris focused perfume that it's main variant is the peppercorn or paprika note. The dry down holds those woody notes firms, but they are soft and gentle and not solidly dominate. The iris is not overly powdery and it's ever so soft and satiny.

I found Paprika Brasil to be almost a dark horse among the Hermessences line. I went in not expecting to like it but it has soon become one of my favorites in the line.
#211871

Johannes
Show all reviews by Johannes
But? There's something very familiar here...wait...I got it. It's a quieter and smoother version of Fahrenheit for Men. Kerosene note and all.
#194791

rogalal
Show all reviews by rogalal
An interesting but vaguely unsatisfying perfume. On me, Paprika Brazil kicks off with regular old dinner-table black pepper mixed with bright violets. There's a nose-tickling red pepper smell in there as well that I think must be the paprika. This stage is actually quite clever. The interplay of the bright perfumey florals with the woody pepper is the kind of thing that makes J.C. Ellena famous.

This eventually dries down to a peppery iris mixed with a woody vetiver, which is what I actually smell for most of the day. Smelled up close, it lasts into the evening, but the projection is extremely weak, almost like the concentration was intentionally left very thin. To really get anything out of it requires a fairly heavy application - thank goodness these Hermessence samples are huge....

Overall, Paprika Brazil is nice, but it never really sings thanks to the low concentration. You could do better with Van Cleef's Bois d'Iris, which is similar but much stronger, though it lacks the clever violets at the start. I'm still giving it a thumbs up, but with some hesitation.
#127255

Fleurine
Show all reviews by Fleurine
I am a huge fan of JCE, but did like this one. Sour and dry on me. Just not for me. But I would stop short of giving a thumbs down.
#94116

I mean.. seriously.. This is possibly the most impalpable fragrance I've ever tried..

And it's a shame because I think this would be not bad at all if you could actually smell something 5 mins after applying it..
#92209

alfarom
Show all reviews by alfarom
Paprika Brasil comfortably sits between all other fragrances of the same line (Hermessence), with its thin and minimalistic structure. Peppery spices and woods pleasantly balanced to create a traslucent and very gentle smell. Nice and well executed but I expected a little more from a supposed"exclusive" line by Hermes. A serious contendant if just half priced.
#89620

The_Cologneist
Show all reviews by The_Cologneist
Underrated scent. Unique, yet simple. Smells like paprika and florals smothered in sequoia's. Longevity and projection are both stellar.
#126699

D
DeletedUser20210620
Show all reviews by DeletedUser20210620
One of the weakest scents from the Hermessence line. Basically a dry-pepper fragrance layered with a rooty iris and a faint wood base. You have to keep your nose very close to the place where you applied it, because the scent has zero projection throughout the evolution. It does last, but it's so faint that it gives you an impression that disappearing after 30 minutes on skin. Not a bad scent, but you'd expect much more for 200 dollars.
#83311

GelbeDomino
Show all reviews by GelbeDomino
In my opinion, the name of this scent is quite misleading. I don't find it reminiscent of Brazil in any way. I know the "Brasil" bit refers to Brasil wood but I would have named it different.I sniffed the cap before spraying and -call me crazy- but I detect a light floral smell similar to that of Violetta di Parma EDP.I sprayed it on my wrist and got suffocated by an intense cloud of Szegedi Paprika, the hot kind. This doesn't last long but is enough to keep me intrigued.After this I got the aforementioned green violet note.Then: beautiful, soft, dry, elegant and refined iris wich starts mingling with leather while keeping the impression of transparency all the time.The drydown is iris-y and leathery and much colder in feeling than the initial capsicum blast.Staying power is decent, about 5 hours. I don't find it has a lot of sillage, it stays close to the skin
#78765

Mimi Gardenia
Show all reviews by Mimi Gardenia
I did enjoy this very much and I almost bought a bottle . On me, it begins very spicey and then morphs into a gentle true iris velvety scent with tons of Iso E Super. It lasts thought as with all jean Claude Ellena's work, it's sheer like silk nylons and transparent. Though it did last through a good hot shower so longevity is surprisingly good. Haiku scent this is . It's elegant, crisp and neat. Got to be in the mood for it though.
#59474

foetidus
Show all reviews by foetidus
Hard to believe that this is as expensive as it is. It's basically a collection of some capsicum-related spices and a green (and a not-to-impressively green at that) accord. These uninspiring notes are eventually followed by a demure wood drydown. I don't know what else to say about it except that it is a pleasant scent without a strong sillage. Paprika Brasil boasts average longevity. If that is worth a couple of hundred, go for it. I'll pass…
#7806

odysseusm
Show all reviews by odysseusm
Pimento, clove and paprikaIris and green leavesReseda, ember wood, woody notes.The opening has dusky green notes and is attractive. The spices are dry and peppery, and the clove is not overdone. The scent overall is subtle and translucent, as is typical of this line. The myrrh-like note from the reseda is heady and perfumed-green, giving a pleasant and soapy quality. The scent is quite enjoyable; dry not sweet. The peppery-myrrhy drydown is really enjoyable.
#35452

jonnyt
Show all reviews by jonnyt
An interesting perfume but ultimately not worth the very high price.Starts almost juicy with the paprika being quite sharp and light, not really gourmand like at all. As the middle notes come through, a rooty vetiver appears but the flowery notes keep it from becoming too heavy. It's an interesting take on vetiver, brighter than most and with all of Ellena's creations typically well made but I won't be buying a bottle when my sample runs out.
#56970

SirSlarty
Show all reviews by SirSlarty
When I first applied my sample, I was taken back to Gucci pour Homme II, a bit of Jil Sander for Men and a touch of Hugo Boss Dark Blue. GphII has pimento, reseda smells a bit like myrrh, the green leaves are like Jil Sander for Men and Hugo Boss Dark Blue's woody notes are here. I like Paprika Brazil but I don't think I'll pay $200 for what I can get from Gucci pour Homme II or Jil Sander for Men. I can't turn my thumb down on this one though.Notes according to The Perfumed Court: pimento, clove, paprika, iris, green leaves, reseda, ember wood and woody notes
#48836 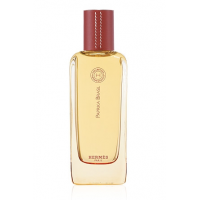