About Fidji by Guy Laroche

Where to buy Fidji 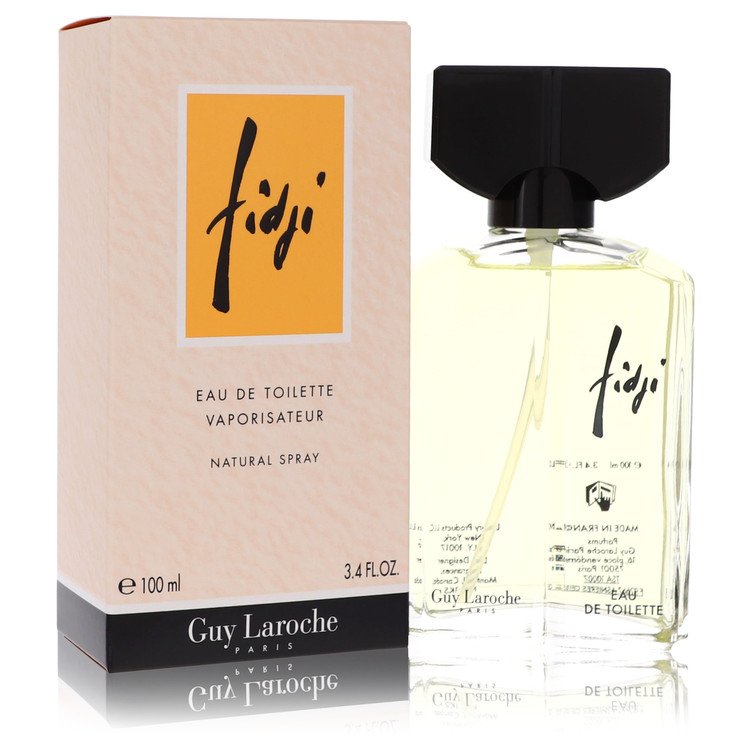 Reviews of Fidji by Guy Laroche

There are 27 reviews of Fidji by Guy Laroche.

Varanis Ridari
Show all reviews by Varanis Ridari
Fidji by Guy Laroche (1966) is a classic women's chypre with a wonderful story behind its creation. The executives in charge of making Fidji come to pass were on vacation in Fiji (of course they were), and included Robert Salmon (head of marketing for Lancôme) and Michael Bedin (head of marketing at Guy Laroche), along with the eponymous designer himself. Guy Laroche had hooked up with L'Oréal to create fragrances for his house to begin with, and Lancôme was added to assist as they had just been merged with the prestige division of L'Oréal two years back. I'm guessing this vacation was meant as more of a business trip to brainstorm the creation of the perfume between Laroche, Bedin, and Salmon, who represented a crossover of Laroche, Lancôme, and L'Oréal respectively. The island itself seemed to be that inspiration, and thus Fidji the perfume was born. Here's where it gets really interesting: The brief for the perfume was relatively simple, stating that Salmon wanted "something very feminine and easy to wear, light, fresh and very floral", and among the perfumers who competed to win the brief was none other than Edmond Roudnitska. At his small chem lab Art et Parfum, he had been working on in private a perfume containing a novel material he had discovered that came to be known as calone-1951; effectively an aldehyde that replicated the freshness of melons. The perfume he created and subsequently continued to revise was worn by his wife Thérèse mostly as field testing when they gathered with industry socialites; but when submitted as his idea for Fidji, was rejected for being "too aggressive for Fidji, but perfect for Dior Couture".

This is when IFF perfumer Josephine Catapano was more or less ushered in due to her experience with Lauder, despite having no contact with Salmon, Bedin, or anyone at Laroche; in fact, she didn't even know the theme or name of the perfume she was working on until the very last moment. Her version of Fidji was not without its special chemistry wonders either, as there is a captive ingredient exclusive to IFF that to this day remains undisclosed as a key element to the floral heart. Outside of that, Fidji is actually pretty conventional for the time material-wise, but unconventional in how it mixed those elements. The opening is the usual aldehydes and bergamot, with some tuberose and hyacinth to start things off, very soft and a bit fruity. The fleshy tuberose is countered by white florals and slight indoles in the heart, along with that undisclosed blossom-like note, making something that smells like a cross between ylang-ylang, carnation, and orris. There is a bit of jasmine lift here too, alongside some soapy elements, and a very early subtle use of galbanum to give a fresh green feel. The explosion of green floral chypres into the 1970's is often attributed to the success of Fidji, and rightly so. The base is your usual chypre with oakmoss, labdanum, and things to build out a woody finish like sandalwood, peru balsam, patchouli, and vetiver. Hints of soapiness over a residual labdanum chypre musk keep some sexy skin feel, but don't interfere much with the florals, and you'll smell this "tropical" floral arrangement from start to finish, plus bits of that aforementioned green. Wear time and performance vary wildly by concentration and vintage, so I won't go there. Best use is in summer to me.

Fidji was Guy Laroche's first perfume, and its success paved the way for a small empire of flankers, concentrations, and alternate spray deliveries. Into the 1980's, Fidji was still standing tall among the big shoulderpad chypres, and became a sort of women's counterpart to the then-new Drakkar Noir (1982) flanker for men. Of interesting note, the packaging is attributed to Serge Mansau, but other sources say inspiration was taken by Salmon from the original Lancôme Tropiques (1935); if you look at the two, you can definitely see it. Overall, Fidji by Guy Laroche isn't very much tropical, but it is effortlessly light, fresh, and easy-to-wear as the brief described. This woody floral green chypre comes across somewhat like a spiritual successor to L'Air du Temps by Nina Ricci (1948) merged with Jean Patou Joy (1930), but with what was then a modern sensibility for a chic youthful direction after years of mature aldehyde florals, syrupy ambers, and butch leathers. Fidji manages to feel young without becoming a powder bomb like so many youth-marketed women's perfumes like those Avon peddled in the era, although I swear Avon copied Fidji to death too into the 80's once it became a popular template. That said, men can still very much enjoy this because of the woody green backbone. Roudnitska's take on Fidji never got used by Dior either after they plucked it from the running, and he made it a bespoke scent for his wife until his passing, when she gave it to Frédéric Malle for release as Parfum de Thérèse (2000). I honestly wouldn't have had it the other way around, because Fidji is a wonderful green floral chypre that inspired an era, and still wears like a second skin decades later. Thumbs up

aquila_2009
Show all reviews by aquila_2009
She doesn't tap red nails on a board room table,she doesn't need that.instead,she finds a place where she feels comfortable and in peace,she doesn't like attention but she will stand her ground and pick what's best for her.she is a woman who spends just as much time in the kitchen as she does in her boudoir and can wear an apron to cook and a glamorous evening dress for dancing.

To me it is a comforting smell with a maternal quality,the complete opposite of cold and hard.a classy woody,green,earthy, sophisticated and ladylike scent.when it first sprayed it smells like,It smells like soap bubbles and cleanliness.the initial greenness is interesting, bordering on too much,but delicate enough to enjoy it.after it ebbs down,the anticipated iris strikes.but not the one i am looking for.way too soapy,like luxurious fancy hotel soap,but still a soap.oakmoss settled in the background with a touch of vetiver.It scent adds an element of luxury to the day."Madame Chosquet Reading" by Renoir.

Cevenol
Show all reviews by Cevenol
I acquired this at a flea in a what the hell it's cheap and smells pretty good from a wrist dab moment and man I'm so happy I did, what a fantastic green floral chypre. I love 19 but sometimes it can be a challenging wear for which you must be ready and dialled in to fully experience, I reach for Fidji instead when I'm in an easy green floral mood. Not to say that they are close relatives aside from beeing green chypres, just a personal, relative impression.
Read the great review below by the very much missed on here Colin for the full picture
Very underated and quite unisex in 2020 as are a lot 20th century feminine chypres that no one wears anymore at all aside from us and sometimes our moms ( Arpege in tha house!)
This is for an EDC vintage, word seems to be it's been eviscerated in current form.

HouseOfPhlegethon
Show all reviews by HouseOfPhlegethon
I had this decades ago. The bottle I have now is probably reformulated. I only remember that I enjoyed this in the 80's and I needed to have it again. It smells pretty good. Not modern, at all. Plenty of floral breeze going on. Wispy aldehydes. A tinge of wood or something like green, earth. Pops of spice. It's a classic.
#192325

Possum-Pie
Show all reviews by Possum-Pie
This is a classic aldehyde fragrance. reminds me of Shalimar a bit. Kind of an "old lady" smell, but definite quality.
#177913
J
JackTwist
Show all reviews by JackTwist
Barbara Herman tells us that: "Fidji starts off green-fresh in its top notes, moves into a radiant jasmine/rose, and, softened by buttery orris, it dries down to a woody and spicy warmth."

One cannot top that description. It is right on the button. Beware the re-formulation, which is weak and less complex. Buy only vintage.

For me this is basically a green hyacinth floral with woody/spicy notes. If Hyacinth is a floral that appeals to you, this is a winner. Compare to Penhaligon's Bluebell.

Fidji was a hit and Roja Dove tells us it influenced Anais Anais, Chanel No. 19 and Charlie.

The bottle is gorgeous - again buy only vintage.

Add your review of Fidji

Other perfumes by Guy Laroche Other perfumes launched in 1966 Members who own Fidji