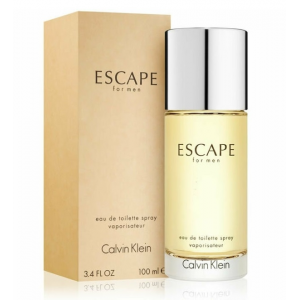 Add your review of Escape for Men

Reviews of Escape for Men by Calvin Klein

lr r
Show all reviews by lr r
Reviewing a fragrance from the house of Calvin Klein can be a little tricky at times because they try and play with one note which i have found common in 3 fragrances from that house and CK1 being one of them.
This smells too cosmetic and flowery and is more toned to the feminine side.
The scent falls linear after 45 minutes and its gone after 90.
This is something i would definitely not spend my money on.
Do not expect great results out of this bottle. An aftershower fragrance for the night time during winters is what CK Escape really is.
This scent is targeted toward the consumers who would like keeping only 1 fragrance in their closet for the sake of having one. Yes, the scent is very general.

I wont be giving this a thumbs down as there are really terrible fragrances out there and some really good designers too which have been reformulated and actually smell worse. But i cant give this a thumbs up either as this does not fetch something special for me and nor does it appeal to my fragrance likes.

The atomizer is really bad.

E
elbenja
Show all reviews by elbenja
I agree with one reviewer that this has just had its time. I am glad I tried it once, but it is a bit too synthetic for my taste. The grapefruit blast at the beginning is a bit much, but this fragrance then calms down into a very nice smell. Get the 50 ml bottle and reminisce a bit and then move on.
#107528

Swanky
Show all reviews by Swanky
Undoubtedly, CK's Escape has been an influential product. It helped usher in the trend in masculine fragrances toward fresh, aquatic scents. It is not watery like many of its brethren. I agree with Shamu that it is not sweet, but the grapefruit is indeed prominent and while I detect the spice, I can't say that it is "super spicy" at all. The eucalyptus is vocal as well. Ultimately, this is not my kind of scent.

It was a bit more daring at the time it came out, but today it is somewhat less outstanding. I find it linear and, after a few hours, grating.

I don't have a particular axe to grind with Calvin Klein. I simply am not impressed by this offering. Longevity is tenacious so if you like this after an hour, have no fear of it wimping out for the rest of the day.

kierroo
Show all reviews by kierroo
With a Quick Whiff, Escape for men gives the impression on tropical cocktail waiting to explode. However when you rub/apply to the skin, the fragrance relax's it becomes smoother and fresher. It kinda relax's you when u smell it, the Eucalyptus note is probably the reason why. By dry-down it become a typical Vetiver, I'm really not sure what to give this Fragrance, but for those who bash Calvin Klein, Escape for men is yet another example their fragrance are not as bad as they are ridiculed
#103256

The_Cologneist
Show all reviews by The_Cologneist
Revising my previous review, I realize after reading it, I was rather biased, which is something I try not to be, when reviewing. That been said.. here goes..

CK Escape.. Undoubtedly, one of the most unique designer scents I have ever gotten my nose under. Excellent longevity and projection, but a very much acquired taste. It reminds me of a bowl of fruit salad, as somebody else has mentioned. Pineapple and eucalyptus notes stand out the most to me here, along with apple, bergamot, and some cypress notes. I have only worn it 2 or 3 times, and from a personal level, I did not like it on my skin, and with my skin chemistry. So I did not spend time sniffing out the notes as it developed, rather, I just waited for it to hopefully get better as it dried down.

In a nutshell.. Escape didn't work out for me. But, to say it's a horrible fragrance would be pushing the envelope. It's just something you need to try before you buy, 100% of the time, on this one.

Tony T
Show all reviews by Tony T
a decent mellow earthy type scent. not a wow scent but more fro the wearer to admire. lasts awhile but you can do better. i received a partial bottle free in a lot i bought off ebay and will most likely use it as an air freshner.the basenotes don't dominate like you'd think.
#53616

Relent de Chevalerie
Show all reviews by Relent de Chevalerie
It's amusing because, with all this, I'm thrown back almost twenty years in the past. Back then, I bought a box of four 15 ml CK bottles. Knowing CK Obsession to be wonderful, I bought this set to try others of the same house. I tried Escape for the first time after I had run out of Obsession, One and Eternity. Left with the last 15ml bottle of the set and unable to find any more of Eternity, I gave it a try in hopes of discovering a fragrance that would bring some changes to my mood. Like most CK besides Obsession that I know of, I see this as another decent scent for people who haven't paid much attention to the subtleties perfumery has to offer. Perhaps they simply have yet to discover them? Or they don't have the means of buying something of better quality? Well, I guess that describes the kind of young man I was when I tried Escape. I must admit getting scared, right away, by this huge mouth the 15 ml bottle had. It screamed of the chances I'd put too much on me. I quickly found out it is watery enough on my skin not to be that risky, even if the bottle gapes that much. In those days, brash and bold, I never even considered trying it on paper beforehand; I applied it right away. Today, revisiting the past, I tried it on both myself and on paper where I found it to be much fruitier. The opening is one of eucalyptus, perhaps of something else also. This immediately vanishes on application to be replaced by a smell of grapefruit peel, bergamot and a leafy note I now know to be birch leaves. There's a touch of mango in it but, again, of the fruit's peel, on me, rather than anything else. On paper, the same hint is more of the fruit itself. I have yet to put a finger on it but there was something about the accord that, I remember, felt heavy; vaguely smothering. Actually, trying it again after all those years, I realize that it might be the synthetic side of the whole that made me feel this. I'm not quite sure since I think I didn't even know natural scents existed back then! Regardless, this hazy feeling I kept getting of being a claustrophobe stuck in a room is the reason I stopped wearing it. Today, it is still the same but I find it to smell much better on paper than on me. I doubt I would wear this one again. I do confess that, past its middle notes, it turns into a pleasant, long lasting drydown so, yes, once I've managed to make it through the weighty sensation it puts on me, I enjoy it. Was this intended all along? Is it part of the concept or is it just my imagination playing tricks on me? In any case, since there are numerous other fragrances out there, why would I go through all this only to enjoy the pleasure of some base notes? To give me the impression that I've managed to get out of an oppressive dictatorship? To finally get a taste of freedom from its despotism? Well, simply put, masochism really isn't my cup of tea.
#75143

Bigsly
Show all reviews by Bigsly
I don't know how to rate this, so I'm going to give it a neutral. I really like the scent, except for what comes across as a cheap bubblegum note, which ruins the whole thing for me. The Perfumer's Workshop makes a similar fragrance, Samba Heat for men, so I just use that instead (I swapped off my Escape bottle). Heat doesn't have that bubblegum note but has a mild wood note that makes it more "masculine" to my way of thinking. I can see how some say Escape has a "synthetic" or "air freshener" quality, and I wonder why they couldn't eliminate this problem and make it smell more natural. Sillage and longevity are at least good. I suggest wearing this a few times to make sure this odd note or quality doesn't bother you. For me, it gets annoying after an hour or so, which means it's really unwearable. Samaba Heat, on the other hand, settles in nicely, lasts, and so I can appreciate it for a long time and never get irritated by any harsh or unpleasant notes.
#50963

O
ortho123
Show all reviews by ortho123
Waiting for it to fade to become almost traditional is hardly an endorsement. Not a tragedy at the beach but more like Juicy Fruit, maybe a cough drop and then the sun sets on our lotion. Is this the one Kramer invented on "Seinfeld?" After years of working at a fragrance counter, you could have met some woman near the end of her shift who said this one was her "favorite" Calvin Klein.
#49598

Ignatius N*6
Show all reviews by Ignatius N*6
I think this fragrance deserves more credit than it has received. I appreciate it, but I can't wear it and don't think it smells good on me. I have tried to get rid of it a few times, but can't! its just so complex--I would never think of pairing birch leaf, grapefruit, patchouli and juniper together--but here it is. I think the biggest turn-off is the synthetic sense one might get from it, and how it seems to evoke that zing of ozone characteristic of male scents of the 90s.
#64794

Madamemagenta
Show all reviews by Madamemagenta
Juicy Fruit Gum. Is this how a man should smell? Not a bad odor, mind you, and best worn in warm weather, just not masculine.
#44467

SirSlarty
Show all reviews by SirSlarty
Highly synthetic smelling. Smells like it belongs in the Hugo Boss line. A fruity fresh fragrance that becomes very pale in the end.
#47784

A
akinyildirim
Show all reviews by akinyildirim
TOLERABLE !I'm definitely not a fan of the CK fragrance line, and there is only one (Obsession) i would probably wear. But i must admit, that Escape is one of the better products from CK. It is very fruity and sweet and although it has that synthetic touch, i find it very pleasent and inoffensive.Once very common and popular, it is now rarely used (in mid-europe).Still better than many new released mass market products.
#42368

More on Escape for Men... 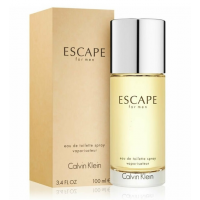