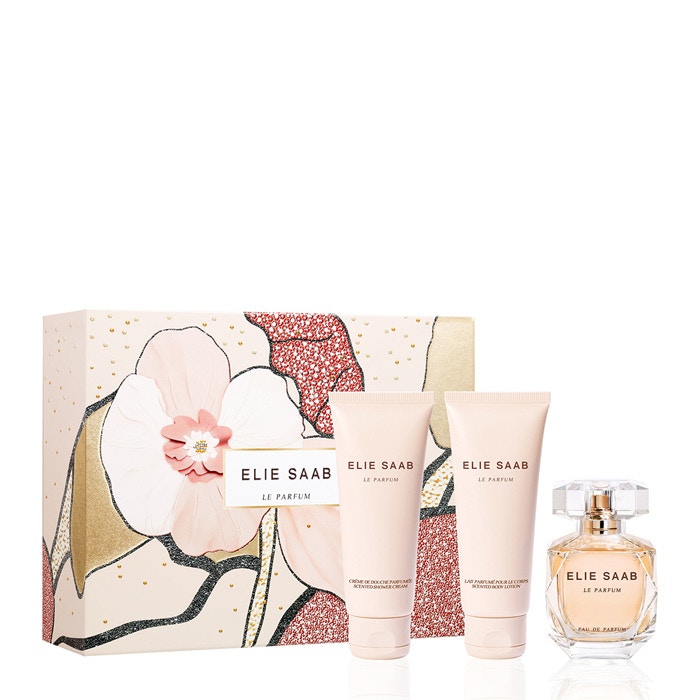 There are 31 reviews of Elie Saab Le Parfum by Elie Saab.

PStoller
Show all reviews by PStoller
A blandly pretty floral with nothing to say, so the less said in response, the better.
#247617

flathorn
Show all reviews by flathorn
I tried this a few years ago and passed on it - it was too pretty, too floral, and never hit below the belt, with little desire to present anything other than a pleasing persona to the world.

But trying it now, I admit to myself it really is a glorious orange blossom-centric honeyed radiance that speaks of summer, with a lack of aldehydes and hairspray. It's all well-done, cohesive, sweet-tempered. It's charming and in my perfume world, a people pleaser.

I can't fault it for more than being constructed to stay in a pretty box, not straying any direction other than eternal smiling summer garden party. But like babsbendix said it has a WASPish ethos to it. There's no dark bits to intrigue me, it's always well-put together and has immaculate hair, but as long as that's understood, Elie Saab is lovely and always appropriate.

My dilemma is how to rate ones like this, considering I get a little Jekyll/Hyde about them. It has a classic, well-made feel and seems it will be perennially popular, even though the ethos may be a little dated. It will be entirely serviceable when I have need of it. But it's never one I'll hang out and share my secrets with. Still, thumbs up.

#245264
S
StellaDiverFlynn
Show all reviews by StellaDiverFlynn
It opens with a lovely orange blossom then comes the jasmin mixed with other notes which reminds me of Thierry Mugler Alien Essence Absolue. I now understand that's the jasmin mixed with sweet notes as honey or vanilla and amber in the case of AEA that made me feel weird. In Elie Saab this scent is less aggressive. The patchouli and the cedar support the jasmin like leaves for flowers. It's elegant and feminine. The longevity is 8h+ and the sillage is moderate. Though not my cup of tea, it sure has its value.

thediamondsea
Show all reviews by thediamondsea
Ooooof. So lovely in all aspects, including that exquisite honey note. I wanted to love this, but I cannot, for unfortunate cultural reasons. We had an insect spray here in the States, ubiquitous in the 1970s and 1980s, heavily overused in my childhood in the palmetto bug-infested American South. Elie Saab smells like it. Most disturbing.
#173970
B
bfrasier68
Show all reviews by bfrasier68
Bright, pretty floral. I feel like there's a tiny citrus note that keeps it fresh instead of being too one-note on me. It's one of my go-to fragrances for the work week. Where I live it gets to be over 100 degrees for more parts of the year than I care for. This is a fragrance that I can wear when the weather's that unforgiving without worrying that my scent is going to evolve into something that smells too strong and offensive. And yes, this sounds like a silly little superficial comment -- but the bottle sure looks pretty on my dressing table!
#164168

babsbendix
Show all reviews by babsbendix
When I first smelled Le Parfum, I said to myself, "Oh! It's the 21st Century Bijan!" And it kind of is! Better quality and much more polished, but you have your orange blossom and honey, and some added raspy texture - patch in this case, and cumin in the Bijan. Lately I'm enjoying how Le Parfum explodes in warm weather, and I wouldn't be surprised if at some point I end up totally hating it.

I just read some of Turin's comments about it, and he used the word "dowdy". If I hadn't known what I was smelling, I'd have guessed it was another Lauder Modern Muse flanker, which to me equates somewhat to "dowdy". I appreciate the quality of Lauder frags, and I even wore Modern Muse Chic for a little while (which smells like a more complicated version of Elie Saab Le Parfum, actually.) Yet the Lauder WASPiness somehow gets into the fragrances - I'm not responding to their marketing - and I find them as friendly and welcoming as sitting through a Daughters of the American Revolution luncheon with my black clothing and nose ring.

What IS that? Musty, weird Vol de Nuit SHOULD smell the definition of dowdy, yet I think of her as an enigmatic and magical woman, who just happens to be old now. I must agree with ClaireV's Poe quote, then - strangeness in the proportion is required for exquisite beauty. Le Parfum is good, and it's pretty, and we're friends, but I can only share so much with her, because she'd find me terribly inappropriate.

Other perfumes by Elie Saab