About Eau des Merveilles by Hermès

Probably would work as a unisex scent. Eau des Merveilles contains no floral note and its notes are upside down.  All the woody-musky notes are on top, rather than at the base of the fragrance.

From surprise to magic and from magic to enchantment, Eau des Merveilles leads us by the nose on a dream cloud. A multi-facetted novel built on a woody amber accord that resonates right through to the top notes, this fragrance was created in 2004 by Ralph Schwieger and Nathalie Feisthauer. It successfully takes on the challenge of being a sparkling women’s perfume with not a flower in sight.

Where to buy Eau des Merveilles 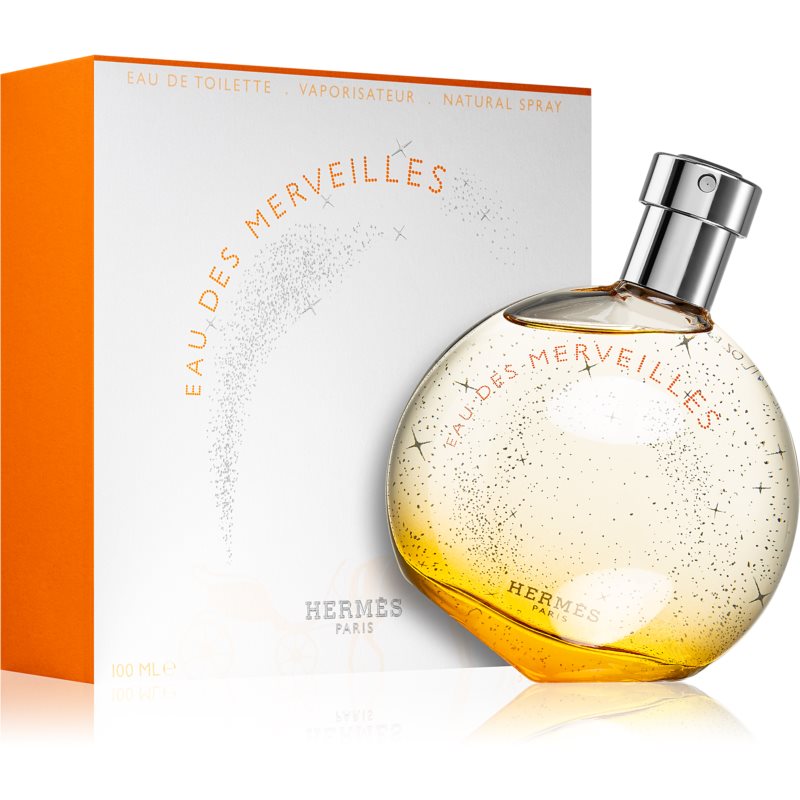 There are 81 reviews of Eau des Merveilles by Hermès.

Mephitis
Show all reviews by Mephitis
Grounded optimism. Oakmoss and ambergris are perfume juggernauts because they buttress more evanescent, poignant topnotes. They provide a deep, comforting gauze on which other sensations can play out, but here that expanse of negative space is just given a little sparkle and otherwise left blank. It's as comforting as looking into the night sky.

The elemi-lemon is closer to a single accord than two separate ones; it finishes with a creamy citrus.

Light but not quite an eau de cologne-style projection, it lasts for maybe half a day. I like it in the transition from Summer to Autumn, it feels bright but salty notes always read a lil wistful on me.

Varanis Ridari
Show all reviews by Varanis Ridari
I'm not the first person to bring it up I'm sure, but the point of Eau des Merveilles by Hermès (2004) is to create a feminine market fragrance that does not contain florals. This was apparently just before Jean-Claude Ellena picked up the reigns as house perfumer for the brand, so Ralph Shwieger and Nathalie Feisthauer were put to task on it, and their solution to the problem of a flowerless feminine perfume was rather unique: make a citrus and woods fragrance upside-down. Yes, that's right, the notes of Eau de Merveilles are positioned and proportioned so that notes typically on top are instead in the final dry down, and notes usually associated with the base come out of the sprayer on skin. I'm guessing this concoction worked, because it spawned a series of flankers, some inventive and some not so much. I don't think Hermès Eau de Merveilles smells much like genius, but it is good, and unisex despite the market copy. The Jean-Claude Ellena and Christine Nagel eras full of transparent nothingness and one-two punch accord structures have made erstwhile minimalist freshies like Eau de Merveilles seem redundant, even if they came first.

The opening salvo of oakmoss and vetiver is quite strange to the unsuspecting first-time sprayer, but the smell is quite aromatic and nice, being green and a bit woody, with a perfect set up for a transition into a nice cedar in the heart (which can sometimes be in the heart in normal fragrances too), flanked by what is claimed to be a rare use of true ambergris in a designer fragrance. I can't verify this claim, and to me it would seem cost prohibitive, beyond skirting various laws in various countries, but there is a sort of mineralic breathy muskiness that is a tell-tale of ambergris, but could just the same be a high-quality ambroxide compound. A bit of "watery freshness" that can only be described as a properly-chlorinated pool (some of you will know what I mean) merges into the citrus base of lemon and orange, given heft by a large dose of pink pepper and a hidden unlisted musk component, because no amount of citrus will anchor to skin for long. The smell is fresh and clean, not exactly "aquatic" nor really floral, but nice. Wear time is about eight hours, and performance is average all around. Suggested use would be summer for me, as a casual scent.

I don't think many people really pay attention to this line beyond Hermès fans or influencers on Instagram and YouTube, who get sent the latest bottles from this line to push onto their following, because I literally see nobody talking about this unless they're someone with professional-looking bottle photos taken with a Leica camera and at least 10,000 followers to their name. Most "average Joe/average Jane" types are stuck on main-line Hermès perfumes like Terre d'Hermès (2006) or older classics like Calèche (1961), but if you're the kind of person to veer into the Hermèssence, then you're also likely to enjoy this scent and its brood as well. The quirky built-in sprayer head and "tilt to the side" bottle base are nice to look at, as is the starry sort of bottle design that reminds of the later and discontinued Van Cleef & Arpels Midnight in Paris (2011), but none of that matters unless you just collect to display. Ultimately, this is a light and harmless freshy with a sunny citrus disposition and a bit of marine vibe throughout, but ends up being a bit of a high-priced alternative in a saturated market segment. Try before you buy! Thumbs up.

Brooks Otterlake
Show all reviews by Brooks Otterlake
Eau des Merveilles is a devilishly hard scent to describe because of its very unusual "upside down" pyramid; you've probably smelled these elements before, but not married together this way. That "familiar but unfamiliar" aspect is perhaps what leaves Eau des Merveilles slightly under the radar, though I'm inclined to think of it as the last masterpiece from Hermès.

The "salty orange" Hermès scent that seems to get the most talk is Terre d'Hermès, but Eau des Merveilles came first. It would seem to have been a hit; it has been successful enough to anchor a line of flankers (the best of which is Elixir, which takes the amber here and amps it up in a more full-bodied, autumnal direction).

Eau des Merveilles might be described as orange-scented sunshine with a bit of breezy aroma from a woody beach. It's warm, delicate, a bit powdery, with an ambergris-style amber anchoring the fragile nuances.

The ambition guiding Eau des Merveilles's creation was the ambition to create a feminine scent without leaning on feminine fragrance cliches, and I find it woody enough to be unisex (in fact, when I initially tried it, I wasn't aware it was a "feminine" scent at all).

JadainGA
Show all reviews by JadainGA
Eau de Merveilles is GLORIOUS! Maybe it's the way it mixes with my skin chemistry is just soooo good. The saltiness and the orange are such a good balance. Sillage is arm's length, and longevity is 8+ hours. BEAUTIFUL!
#223155

Shycat
Show all reviews by Shycat
I suppose orange and cedar are not my favorite pairing. I've never cared for a cedar note. I find the vetiver to be dusty and the orange to be overwhelming and dry. I don't find the ambergris note.

I do experience a floral overtone but somehow this composition doesn't please me. An hour in I'm wondering how they got this effect and what synthetic chemicals are at play-- the orange is orange: it's not sour, but sweet. And yet dessicated, underpinned by something that tickles my gag reflex. Not fecal, not animalic, not civet.

As I type the above...I realize I'm back to hating peppered fruity florals. Oh my, this is giving me Stephanie flashbacks.

My dear son comes out of his room. Stops 12 away from me to stand longingly in front of the pantry--I've walked through the kitchen about 30 minutes ago but not so far as the pantry, about two hours after four small spritzes (context for sillage and longevity.) Spontaneously says:

This is the second complement I've ever gotten from him, the last when he was 10 years old for Blue Amber.

HouseOfPhlegethon
Show all reviews by HouseOfPhlegethon
I like the citrus mixed with elemi at the beginning. It is sorta unusual and very pretty. Nothing overwhelms here. It moves into a creamy thing... The middle tends to mellow into a half summer, half autumnal feel. No note seems to fight for attention. They all just groove along... The heart later becomes rather dull, in my opinion. Too safe.

The fir note in the base gives me interest. The base has a muted fresh, forest vibe. Still, there isn't enough here to thrill me. The top was great then the whole thing fell flat.

Later, fir and cedar seem to make the base a bit more pleasant for me. Not a lot of sillage for this one. Skin scent, for sure.
#218324
Show more reviews of Eau des Merveilles... Members who own Eau des Merveilles

Search for Eau des Merveilles by Hermès on the Basenotes forums.
Top