Where to buy Eau de Star 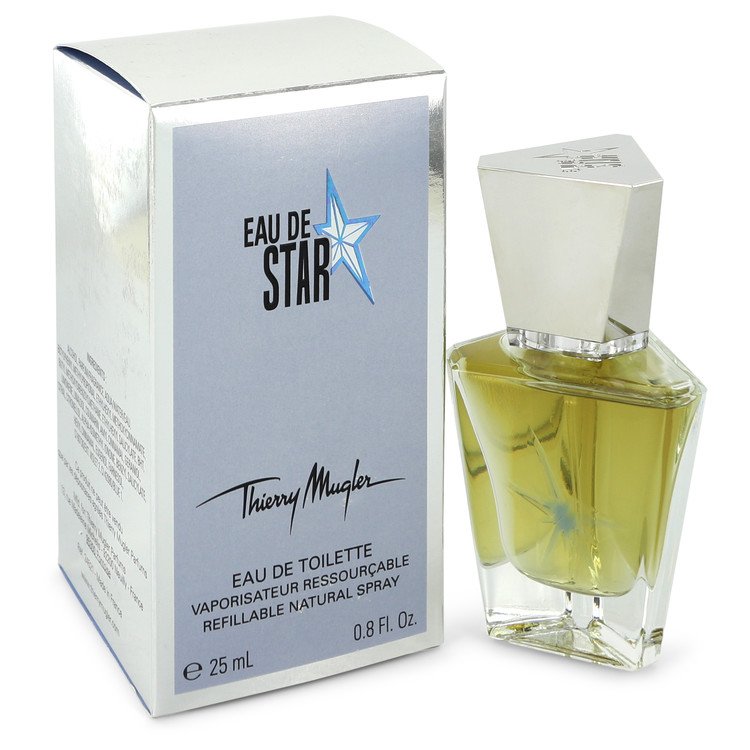 There are 20 reviews of Eau de Star by Thierry Mugler.

Kira A. Gold
Show all reviews by Kira A. Gold
Thierry Mugler's Eau de Star bottles up that summer you spent with the bleach blonde stoner cutie who carved a bong out of a watermelon.

Fresh and wet and high and unforgettable.

#220513
S
StellaDiverFlynn
Show all reviews by StellaDiverFlynn
I didn't have a very high expectation to Eau de Star as the list of notes doesn't seem to be that promising. Like many have pointed out, it opens like Angel washed by sea water. The chocolate vibe from the original is brought away by waves. What's left is sharp, raw, loud patchouli soaked in salty water.

Then I get some whiffs of watermelon. And to my delightful surprise, it smells very close to real juicy watermelons, just like those we eat in summer. At the same time, the sharp patchouli quickly mellows, and completely disappears after 2 hours. The whole scent now turns from green-aquatic to a creamy salted honey-vanilla. The salty aspect makes it smell almost like salted caramel or popcorn, but in an elaborated way like, for exemple, Prada Candy. Watermelon is still detectable, and pops out here and there. I never thought of combining dewy watermelon with creamy honey and vanilla. It's still wierd, but in a bizarre harmony, like Minor accord in music.

The sillage is good, I get whiffs from time to time without suffocating. The longevity is at least 7 hours. To me, it's a fragrance with unusual combination and it works well. After wearing it for several hours, I honestly think it is quite remote to Angel though it might have got some inspiration from it. Eau de Star is warm to my nose, but with unmistakable summery aura. Definitely worth at least a try.

#211025
J
JackTwist
Show all reviews by JackTwist
Since Mugler's breakthrough in 1992 with the original Angel, he has managed to create over thirty flankers, none of them really re-thinking the Angel formula, but each one adding different ingredients to the basic formula. Some have learned to play well with that formula. Others try valiantly for half an hour, then go their merry way, unable to outshout the brass original.

Eau de Star is such a formula. The original Angel comes through loud and clear. Added to it is a dry, reedy (Artemesia-like) note that is joined by a peppery-minty accord. It's still Angel, but it's as Turin noted more a "toothpaste Angel." He also called it a "minty oriental," but I can not see Angel as an oriental, as it is firmly ensconced in the gourmand family.

If you like Angel, you'll like this variation. Neutral marks for Mugler's ongoing lack of originality. Sitting on one's laurels, creating flankers for his one big hit seems what he is for the most part content to do. Although I will give him credit for branching off in what seems a new direction with the Miroir series - nothing to remind one of Angel. A relief!

Infini
Show all reviews by Infini
I bought Eau de Star without trying it first, after having liking the sound of it in reviews: I remember being quite shocked how much my first spray was like Angel. After a while, however, aquatic notes (most noticeably watermelon) began to appear, and also a note that reminded me of Mugler cologne. I'm afraid the more I wore Eau de Star, the less I liked it. I remember it being very strong, and it took several showers for me to be free of it whenever I wore it (Alien does the same on me). I can't say I was sorry when I eventually got to the end of the bottle, and, needless to say, never refilled it.

#189387
K
karinoula
Show all reviews by karinoula
 Peppery summer!!
SUPERB summery perfume, another unique creation of Mugler house. Genius mixture of patcoulli, watery and sweet notes which last long. It will not suffocate you like Angel but it will up-lift you with this peppery wonder. I love this unique feeling which will accompany you the whole day. The bottle is lovely too. Good Job!!
#143836

This one should have been A*Men. Taken on their own, the mint and melon top notes are a hackneyed male sport fragrance gesture, but slapping them on top of the fruity floral and patchouli accord from Angel is an act of inspired lunacy. The result is weird, wacky, and frankly much more pleasant to wear as a man than the obscenely dense chocolate pudding of A*Men. Am I the only one who sees the fun in this?

Members who own Eau de Star