Already a classic. This fragrance has a truly sexy scent. The box has a deep blue velvety finish.

When launched, this fragrance won all three awards at the International Academy Awards of The Academia del Profumo. (Best Fragrance, Best Packaging and Best Advertising) 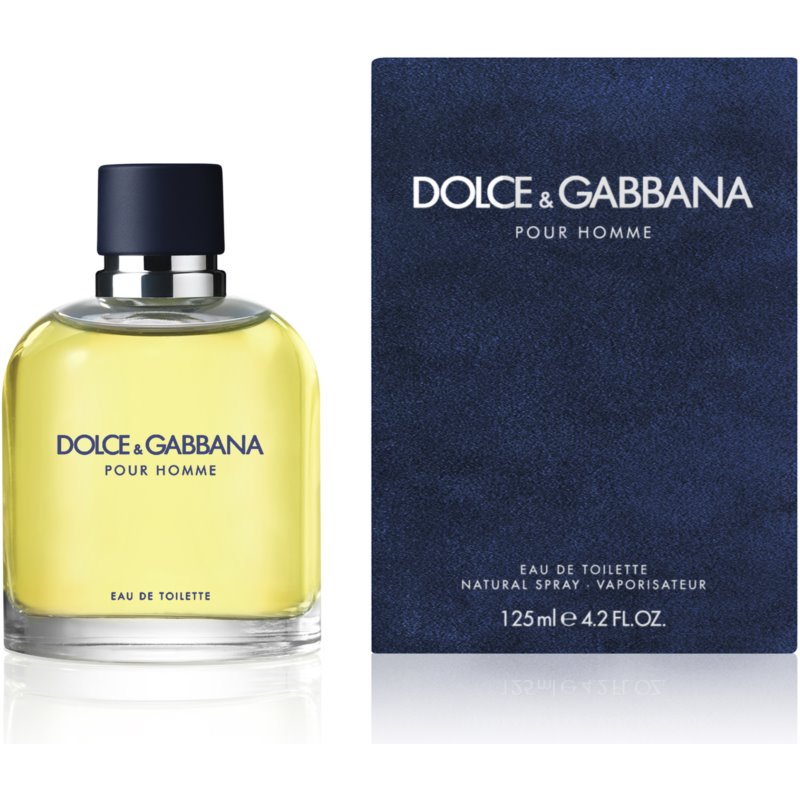 186 Positive (66%) 43 Neutral (15%) 50 Negative (18%)
N
NeedaColognic
Show all reviews by NeedaColognic
I really like Zealot Crusader's review - I think it's right on. And I agree with mistersurgery's review too. Not much more I can add to theirs and everyone else's reviews. This was the second cologne I ever owned, after I ran out of Hugo, in my mid-to-late 20s.

I bought it because it smelled good on a co-worker who used to sell me pirated bootleg DVDs of movies still in theatres!
I said, "Hey man, that cologne you're wearing smells really nice! What is it?! (I think he wasn't too pleased that he was receiving compliments from a guy, instead of the ladies). He abashedly told me it was Dolce & Gabbana. That sounded way too fancy for me, but it smelled really good, so I got it anyways.

And it sure did smell good! So I felt sophisticated, mature, and good smelling, well into my early 30s...

mistersurgery
Show all reviews by mistersurgery
Dolce & Gabbana pour Homme is basically a well-made fougere with some odd accoutrements that make it novel yet good.

It starts out seeming like the bastard child of an eau de cologne and a fougere, with the fougere portion of it at first reminding me of YSL's Jazz (1988) and Cartier's Pasha (1992). It's after a few minutes that the true star of this fragrance takes the stage, and it's a wonderful tobacco that comes home to roost. The tobacco is thick and sweet, giving this an undertone that almost comes across as a sweet fruit like a plum or date. That tobacco is what makes this scent so good, not unlike the way it is the prime mover and heart of Versace's The Dreamer, released two years after this in 1996. The base also contains the common sandalwood/musk combo of the '90s, but the tobacco and coumarin just elevate this out of the realm of standard-fare fougere, and even out of the realm of "fresh fougere," as this scent really stands out as a one-of-a-kind to me. The particular combinations in D&G pour Homme are as distinct and unique as those found in fragrances like Acqua di Gio pour Homme (1996), in the sense that I know exactly what this is when I smell it. I can't confuse this with anything else.

This was certainly one of the top fragrances of the 1990s, and it deserves its place as a classic of that era. Sadly, D&G doesn't have the best batting average with follow-ups, and this is, in my opinion, the best male fragrance that they have ever put out, with nothing else coming a close second to it. Thumbs up on this classic, for sure.

carlos-uk
Show all reviews by carlos-uk
Lavender....basically. It's Eau de L'Occitan done a bit quieter and with softer edges. Nice enough but not mind blowing. The dry down has some mild interest in it but again, not mind blowing. Based on the reviews I had high hopes for this but alas this is not 'the one'. The search continues....
#216860

Sniffers
Show all reviews by Sniffers
this is for The German ( middle ) version...have not smelled either the Italian or British versions...for me, it opens with a nice soft citrus with spicy accents...almost immediately i sense a laid back gentle tobacco scent that , to me, is the main player in this presentation...refined and elegant...a scent for a gentleman...office friendly for sure...decent projection...a little dash of pepper...just a hint of something flowery...dries down to a pretty awesome sandal/cedar woods combo...this may not be quite niche quality, but very close...top shelf designer fragrance...hey, how can I go wrong...this meets the most important criteria...my wife likes it on me...that's a rare thing...LOL
#214566

tinfoilhatdude
Show all reviews by tinfoilhatdude
Love this scent, can probably pull it off year-round. Fresh, but with a twist all its own, definitely the original vintage for me. The newer stuff is more yellow and doesn't have the same notes as the original.

Sillage is just right for office wear, but tends to fade throughout the day. Longevity likewise. But after 6-8 hours it's easy to reapply.

A true classic, too bad for the euro laws trashing all the good ones....

Varanis Ridari
Show all reviews by Varanis Ridari
Dolce & Gabbana pour Homme (1994) is a modern classic. Before Dolce & Gabbana's barnstormer known as Light Blue Pour Homme (2007) was surfing the second major wave of men's aquatics fragrances, there was this little gem of a scent winning awards over a decade earlier. Dolce & Gabbana pour Homme was naturally of the "fresh" fougère variety which was sweeping clean all the powerhouses and aromatic affairs of decades past, but unlike most of its rather sterile brethren, it had a pretty masculine backbone under all the freshness which didn't rear it's deceptively traditional head until the dry down. The first male fragrance from the brainchild house of designers Domenico Dolce and Stefano Gabbana was right on time to ride the wave started with Calvin Klein's blockbuster Eternity for Men (1989), but the two Italian designers from Legnano were smart about not being swept up in copycats, working very closely with perfumers of both male and female debut scents for the house, leading to multiple awards won and the reputation which now precedes this stuff. Get it right on the first try, and people will overlook future mistakes is what I've often heard, and that explains why many see to this as a reference for the 90's from the house but only a few besides hardcore fragrance collectors remember the other two 90's masculines D&G made between this and Light Blue (By Man and D&G Masculine from 1997 and 1999 respectively). D&G Pour Homme really is the high water mark for the 90's fougère craze, and it's no hyperbole to say that the designer world could have just ended the genre there and went in a new direction afterward, leaving this kind of thing for the drugstore perfumers to murder with clones instead of aping Claiborne's Curve for Men (1996).

I'm not calling this juice godhead by any means, as the 90's fresh fougère is far from my favorite style to begin with, but in terms of sheer originality and quality, this takes the cake for it's time. For starters, all the ingredients here are of natural and believable description, even if some of them may be represented in the actual fluid only chemically. Bergamot, mandarin, neroli, lemon, all those seem pretty standard stuff and are light as can be expected in a scent of this period. Indeed D&G pour Homme does have a standard opening which remains breezy and just what the doctor ordered in the "clean slate" 90's style. It would almost be boring henceforth if those gingerly-applied notes didn't quickly step off stage to be replaced with dry powdery lavender, which is uncommonly found as a heart note here and would be duplicated by Prada Luna Rossa nearly 20 years later. Sage, tarragon, cardamom, and a touch of what I perceive as standard table pepper give this the subtle kick in the pants it needs to stay above the din of its genre, before taking another unexpected turn into an uncommonly rustic base which gives D&G Pour Homme it's charm. Sandalwood and cedar (polysantal and Iso E) get to play here in a stately manner similar to Dunhill Edition (1984), while white musk, "tobacco" from tonka, and the interesting floral choice of iris give a dandy touch most younger guys in the 90's had no point of reference for then. Versace would borrow this tobacco/iris finish and build The Dreamer (1996) around it, helping form a new genre of floral clean tobacco fragrances for men; iris in general would become a more common note into the 2000's but here it is in 94. Wear time is about eight hours and sillage varies throughout the day but you'll notice this plenty. I'd say D&G pour Homme is year-rounder signature material.

The tobacco in the base is the only bit of contention that some may have of this scent (just like the aforementioned Versace), because the average Joe thinks of burning cigarette stench when they see it listed, which is maybe why a lot was done to hide it with the iris, woods, lavender and musk. The tobacco here adds weight more than any smoke, feeling leafy and floral, likely taking the place of what would have otherwise been a more common vetiver note, giving it a special "something" the competition just didn't possess. People who don't like this era of 90's fougère are likely not to like this much either, but I'll take it long before most other D&G scents ever crosses my skin. D&G pour Homme is quick enough on it's feet to not feel oppressive like modern sweet tobaccos, but unless you're dating in the heat of a midsummer day, I wouldn't consider something this sharp romantic. D&G Pour Homme is the perfect balance of 90's zest and that classic dry, tart "man's scent" aura which was probably a huge boon to older guys crossing over from heavier styles. Reformulations have not always been kind to this scent either, with original stickered Euroitalia bottles from Italy being best, and early P&G Prestige bottles from Germany to be avoided. After that, it's a crap shoot with UK P&G batches until Shiseido took over from 2017-2021 which bounced production to France. Whoever they get next is a mystery. Dolce & Gabbana Pour Hommme is nearly a case of "nothing's new under the sun", but also has the most personality of anything in it's class. A generalist for people who don't like generalizing! Thumbs Up!

Other perfumes by Dolce & Gabbana