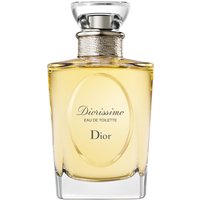 There are 76 reviews of Diorissimo Eau de Toilette by Christian Dior.

Cevenol
Show all reviews by Cevenol
Spring in a bottle, It's the kind of tiresome cliche I roll my eyes three times in it's socket anytime I hear it... But I don't care, here it is, the cliche and the scent.
Maitre Roudnitska
#229183

softstarlight
Show all reviews by softstarlight
Lily of the valley, jasmine, lilac, all stand out in this. A bit strong on me so i use it sparingly
#202694

This strikes me as a stripped-down floral done to near perfection with high quality materials. The opening is almost tropically floral without leaning into fruit punch territory (no surprise to see ylang listed). Rich, lush, deep - all without feeling heavy or cloying. In fact, it's alarmingly light and airy at the same time. I find it hard to describe this contradiction.

It prominently features a full-bodied lily of the valley note which is also not cloying, as it sometimes can seem to me. This lends a beautiful, crisp, dewy white/green vibe without feeling too stuffy. I found the tropical ylang to burn off fairly quickly, at which time the LotV pretty much takes over. There is a woody backbone to this that brings to mind sandalwood, not as a featured note but rather part of the matrix, providing attachment points for the florals.

Beautiful stuff. While very floral-forward and feminine (as far as my tastes go), if I had a craving for a LotV scent, I'd have no problem breaking this out and dabbing some on while I'm out and about on a spring day. It is also very much a time-machine scent. We had a large patch of LotV in my front yard growing up. My mom was a flower/gardening nut, as well as a wearer of this perfume oil called Rain from a local apothecary (funny enough was called Lily's of the Alley) which was primarily a LotV soliflore, but way more heady/rubbery than this. It takes me back.

Abbiss
Show all reviews by Abbiss
I smelled this on a colleague. It's not very interesting, the only thing that projected with lilly of the valley. It smells good, though.
#195835

Crikey! A big wallop of Muguet. Similar breathtaking, send your head spinning, burst of Yeasty Floral as Lutens Purple Sarrasins. It differs in that Civet grabs the nose hairs and folds the path into a magical land, through of the Month of May.
Galbanum draws one into the fresh Green-ness. Those little White flowers, set against the bright lushness, have me feeling, I am being devoured.
Nostalgic whispers of my Maternal Grandmother, who loved all of the Lily family, particularly the Muguet.
She was Viking fierce with her love and although I appreciated her fragrant sillage, I was a little frightened of her, as a youngster.
With Diorisimmo, one needs to be comfortable with a little of the LOV Progesteronic Feminine strength.
Being an extrait, a half an hour in and I am captivated by the slightly soapy, billowing halo that surrounds my corpus. Here, I can recognize the Roudnitska Symphonic orchestration. Diorisimmo treats the LOV with the respect that it deserves.
For myself, I would tend to take my Muguet, in the likes of it's note in Eucris etc.
This scent is made for Women, who are most Feminine and carry a core of burning fierceness, within an exterior, slightly cool.
Recommended in 80's Vintage, surely.

Other perfumes launched in 1956