About Dioressence by Christian Dior 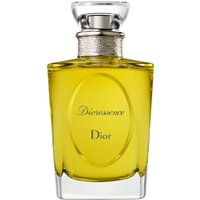 Reviews of Dioressence by Christian Dior

There are 32 reviews of Dioressence by Christian Dior.

PerfumePorMoi
Show all reviews by PerfumePorMoi
I have no idea what the original Dioressence, or any of its subsequent reformulations, smelled like. Nor do I care. Because what is wafting up from my wrist right now, from a bottle purchased from Saks just days ago, smells absolutely fantastic.

I struggle to express just how happy these kinds of outsized, kitchen-sink green/chypre/orientals make me. Spraying them instantly tunes the world right up to eleven, eradicating with a great big "hell yes" yop every single scolding voice that pushes for attenuation and restraint.

Screw that. I'm in the mood for clearing elevators.

#215333
L
lorrainedellar
Show all reviews by lorrainedellar
My review is for recent incarnation, poss from 2016.
I want to like this as on paper its just up my alley but it is almost too overpowering for my tastes. Its a big patchouli bomb.If I spray very lightly I can just about get away with it and there are elements that I love but I think there is a bit of vanilla and too much of something else I can't place in the drydown,its compelling but a bit repellent at the same time.Will persevere as I blind bought a big bottle.
I did put some in the rinse water when I hand washed a silk scarf the other week and its smells lovely on the fabric so maybe that's the way to go with this baby!

Kotori
Show all reviews by Kotori
This review is for the reformulated version currently at Sak's and Neiman. I have never had the opportunity to try the vintage.

The harsh green opening is challenging for me and has a bit of an "old lady" feeling to it, which I think is the geranium and violet.

After 5-10 minutes, it is an unapologetically bitter chore/oriental with a green tinge. At this point it reminds my husband of bitters from the bar.

When the dry down hits, it is quiet, but gorgeous, with the cinnamon and patchouli so well-blended that they are not directly identifiable. It is gorgeous and lasts all day.
#164701

Infini
Show all reviews by Infini
Dioressence used to be a lovely fragrance - especially in the Parfum strength. I would think it was definitely influenced by the trend started by Youth Dew and Opium, but it was greener and more delicate than other oriental fragrances of the same era. There were originally three strengths: Parfum, Espirit de Parfum and Eau de Toilette, and some lovely bath products too.

I recently tried the new formulation, and was very disappointed: the overall scent is similar to how it used to be, but after wearing it for a short time, it changes and becomes a rather sickly, sweet, spicy nothingness. (I have found that Eau Fraiche seems to have undergone similar reformulation, though Diorissimo seems the same as it always did. I am currently putting-off trying Diorella and Diorling in case they have suffered similar reformulation).

My thumbs up is for the original formula of this once-glorious perfume. I realise trends in perfume change, just like anything else, but I find it difficult to believe how so many houses (Dior, Givenchy, Guerlain, Patou, and even Caron, to name a few) are all but discontinuing some of their truly great perfumes, only to replace them with throwaway sweet nothings.
#145200

jtd
Show all reviews by jtd
2013I've seen some discussions online about the merits and pathologies of vintage perfume collecting. I'm live-and-let-live on this one. If it feels good, do it. But how far will you go for vintage? Me, not far. Of course my consolation prize is all of contemporary perfumery, so I'm not panicking.

But sometimes you can't say no, yes? I've come across an old/new bottle of Dioressence edt from the 90s-00s. Dioressence the Tease, the Trap. Purported to have made the progression from old school, animalic grande dame to complete rubbish. To believe the stories, the vintage is the Grail, and the later reformulations weren't worth pissing on.

So what vintage had I found? Fuck if I know, but it's interesting. It's not the monster that I suspect the original formulation was. But is it trash? Not at all. It's a powdery, spicy oriental-chypre that's built for human scale. Prim and upright but also tart and musky. More than a bit sweaty, actually. Dioressence has that come-hither yet stand-offish quality that old-school powdery perfumes conveyed so well.

2016– I've just found a wrapped and sealed bottle of pre-1980 Dioressence eau de toilette. This is the original version, composed by Guy Robert. It existed in its original formulation from 1969 to 1979 when it was reformulated by Max Gavarry. The bottle I found in 2013 was Gavarry's.

Gavarry's reformulation resembles the Robert original in that are both powdery, woody-floral chyprientals in a perfume-genre multi-culti sort of way. Gavarry's started with a tart, funk-and-powder dynamic and spiciness in lieu of the animalic quality of the original but the drydown failed to keep up. It was tame in comparison to raspy balsamic drydowns found in other 70s-style oriental/chypre hybrids like Rochas Mystère and Lancome Magie Noire (both 1978) and Lancome's Sikkim (1971.) Though both models of Dioressence cover a lot of the same territory, the evolution of the Robert version favors the classic oakmoss/amber drydown of a chypre and therefore seems more coherent. Its path is more logical than Gavarry's which has its finger in a few too many pies.

From the perspective of 2016 both versions seem dated, but in 1979 I imagine the new model' read as more contemporary than the original Dioressence. As animal-sourced materials were fell out of favor, rich, spicy notes were used to give perfumes depth and richness. The Gavarry reboot fits in with the Cinnabar/Opium/Ispahan spiced-eggnog perfumes of the late '70s. The original Dioressence was based at least to some extent on Miss Dior, a floral-animalic chypre from 1947, and would have seemed unstylish and outdated by 1979. Gavarry's version made sense for its time, but from the angle of 2016, the original has the glamour of the coveted mid-century chypres. The Gavarry is like a 70s movie sequel by comparison. Less authenticky.

Dior continued to change Dioressence over the years, the name being the only continuity to the original. Quite unfortunately, Dioressence's lasting contribution of perfume history is that it started Dior's trend of continual, unacknowledged reformulation. Look no further than the bottomless pit of Dior Homme and Miss Dior Chérie reformulations. Actually, look further. The unambitious reformulations of Dior's classics like Diorissimo, Diorling and Dorama–Les Créatures de Monsieur Dior' I believe they're called–are the logical and regrettable outcome of the repeated tinkering with Dioressence over the years.

Add your review of Dioressence