About Dior Homme by Christian Dior

Where to buy Dior Homme 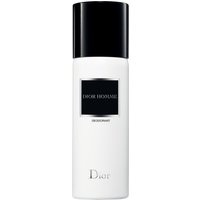 There are 304 reviews of Dior Homme by Christian Dior.

Very nice cocoa and wood notes in late dry down but it takes way too long to get there.

Pretty good as far as designer scents go but they just don't do much for me these days.

#245756
E
EauDeCowboy
Show all reviews by EauDeCowboy
Oh Dior, you comfortable warm friend. My bottle is circa 2015 and it quickly became part of my daily rotation.

The open is very much a blast of department store lipstick and powder goodness that's often mentioned.

Once dry, you get into the cocoa leathery bliss that makes it special. In this case the leather shows up as spotless leather furniture rather than old worn-in jacket.

Growing accustomed to the iris blast opening took some time, but the more masculine leaning dry down pushes it slightly left of unisex (though it would probably be incredible on the right kind of lady).

Intimate enough for date night, this really shines as a crowd pleasing daily scent (especially in cooler weather). Fairly sweet/powdery so wouldn't recommend as a blind buy but definitely gives the impression of a well blended mature scent that stands out from the crowd.

Overall two thumbs up for its depth and warmth!

notspendingamillion
Show all reviews by notspendingamillion
Fantastic. New formulation. Starts off iris sweetened up with dry cocoa and a small bit of leather. Well balanced and constructed. Last 8 hours, projects maybe one or two. Easily my favorite of the whole line. Not overly feminine or macho. Classy.
#217898

Not too sweet.
Not too spicy.
Not too woodsy.
Not to fresh.
Not too loud.
Juuuusssssst riiiiggghhht.

Seriously a high quality fragrance at an attainable price. Light years ahead of that "Sauvage stuff". Sad some flankers are being discontinued, as this line is by far the best designer line out there.

Sure hope the flankers are not being discontinued in favor of the "Sauvage stuff"..... Can't stand that headache spray...

Varanis Ridari
Show all reviews by Varanis Ridari
Parfums Christian Dior had a few misfires with the men's segment in their attempt to make a successor to the accidental masterpiece that was Fahrenheit (1988), but the 90's and early 2000's was a rough place for designers to attempt innovation. This is mostly because the buying public was almost anti-culture by the turn of the 90's, rather than counterculture like in the 1960's into the 1970's; sophisticated forms of music were thrown out for simple or atonal varieties, color form-flattering clothes were disposed of in favor of impossibly baggy or monochrome duds, and worst of all for perfumers, olfactory dynamism was traded out for an apologetic sea of shimmering freshness. Dior had no real way to fit in with the aquatic genre since they ended the 80's with gasoline and violets, while the "fresh fougère" also eluded them since that style had mostly run it's course even before the 90's came to a close. Dior chose to run with the short-lived fig fad started by Diptyque with Philosykos (1996), marrying fig to soft musk with Dune Pour Homme (1997), but it didn't move units as planned. Next up was Dior Higher (2001), another fragrance cashing in on a short-lived fad, which in this case was the super-shrieking ozonic grapefruit style which multiple designers tried to wing at the under-21 segment of mall-going males. Suffice it to say, Higher was lower than expected. Thus, by the mid 2000's, Dior just fell back on tradition and created a gentlemanly floral leather fragrance the likes of which would have otherwise seemed out of place if not for the retro-chic boom caused in the segment by Gucci Pour Homme (2003) and Yves Saint Laurent Rive Gauche Pour Homme (2003). It was a surprising move that worked, considering the gimmicky direction of the previous two pillars, but one that proved not everything needs to be "fresh" and "light" in order to appeal to modern tastes.

This was before the days of François Demachy running Parfums Christian Dior as head perfumer, so a young Olivier Polge (yes, that one) must have won the bid to compose for his then-employer IFF with his primitive, and thus landed a huge credential on his resume, since Dior Homme (2005) ended up being an unlikely anachronistic success. Now, to be fair, Dior Homme isn't entirely old-school. Olivier Polge wields then-modern gourmand structures onto Dior Homme's powdery florals, earthy woods, and sharp leather structure, being something of a semi-chypre gourmand perfume that has for all intents become the Guerlain Habit Rouge (1965) of it's generation, seeing much romantic and formal use. The scent opens with bergamot, lavender, and sage, all very traditional head notes for most masculine perfumes throughout the 20th century, but the weirdness happens with the middle phase. In the heart is a now-legendary iris note, powdery and feminine, often called "lipsticky" by detractors because iris is commonly found in lipstick scent. This poofy iris note is balanced with dark cacao and an old-school composite amber, the vanillic "brown" type that doesn't exactly emulate ambergris, but is a far cry better than modern synthetic ambroxan. The scent is warm, rich, mildly soapy and somewhat unisex by this point, but a perfectly balanced green base re-asserts the masculinity of the composition by the end. Patchouli is balanced by an grassy vetiver, cedar, and subtle suede-like leather note. The whole thing is rather radiant but still soft, approachable, and gentlemanly. I get about eight hours with mild to moderate projection myself, and find the iris in particular sticks around with the base notes after everything else has gone. Dior Homme also shows different facets of its composition depending on the temperature and where you spray it, and I get more iris on clothes, with more cacao on skin, and more patchouli/amber presence with a bit of heat. The leather accord isn't strong regardless of conditions, so I wouldn't suggest it for leather lovers. Original bottles had a metal stem until about 2010, then house perfumer François Demachy reformulated this himself in 2011 to meet IFRA requirements, resulting in a tiny bit brighter development, but it's integrity has held up nicely overall.

Dior Homme is certainly no powerhouse, or else they wouldn't have needed to make an intense version two years later, but that's not it's point of existence. Nobody was doing mature, well-meted masculines of this type in the mid 2000's, and very few were playing around with chocolate notes, and I'm sure the cacao in this directly inspired Avon's Tomorrow for Men (2006), which commits more firmly to the note and goes further in the gourmand direction overall, making that scent its own animal. In fact, the gourmand notes in this inspired a lot of designers, and the iris note prominent in this also opened up everyone's eyes to the note being present in masculines once again, with the last time it was notably used in the designer sector being in Versace the Dreamer (1996) almost a decade beforehand. I think the best use for Dior Homme is in fall through early spring, for classy get-togethers or evenings out. The scent is relaxed enough to do casual duty, and poised enough for formal business affairs, but I find the chocolate present to make Dior Homme a tad bit too sensual for my taste in those settings, but that's just me. Dior Homme would be successful enough to receive an army of flankers in its wake, more than any other Dior masculine to date, so not only was it the first real successor to the Fahrenheit crown, but also threatened to overshadow Eau Sauvage (1966) as well, at least until Dior Sauvage (2015) was launched to put Dior Homme in its place. Guys looking for something mature, but not too "dated" (whatever that means), attractive without trying to be, and approachable without being too casual will find favor with Dior Homme, as will vintage frag heads that want something actually made in the 21st century in their collection but don't like where the "scene has gone" since Y2K. As a warning, there is also a Dior Homme Parfum (2014) that has little to do with Dior Homme or Dior Homme Intense (2007), so make sure to test! Thumbs Up!
#209282
Show more reviews of Dior Homme...

Add your review of Dior Homme Members who own Dior Homme