About Dior Dior by Christian Dior

Where to buy Dior Dior 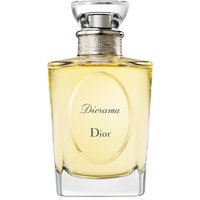 There are 9 reviews of Dior Dior by Christian Dior.

Wild Gardener
Show all reviews by Wild Gardener
Is this the prototype of the creamy - peachy scent you get in Narciso for Her and The One?
That would be curious if it were, they were both done by Christine Nagel, lately appointed to the crown of Hermès by Jean-Claude Ellena, himself the protégé of Roudnitska, High King of perfume lore.
This is undoubtedly the best of the bunch, a creamy, peachy, bitter and green floral; subtle - even if an assertive chypre.
It's beyond fashion this smell, deeper than any trend. Not something that will appeal to followers of fragrant fashion, probably because it doesn't try to appeal to anyone. It reminds me of a rebellious teen, fresh faced and cute, but ready with attitiude and a quip on the tongue; and - oddly - dressed in a pale silk gown.
Like many of Roudnitska's works there's something thrawn, edgy and wrong about this. He seems to have been a masterful artist, not one for turning out crowd pleasers. And, I can say, Dior Dior doesn't please that much. Its creamy chypre demands respect, but it doesn't get much love round here.
It's an ugly duckling, one that grew up to sire many greats; Dominique Ropion and Le Feu d'Issey not least among them.


#235513
T
Tristan45
Show all reviews by Tristan45
Recently scored a pure parfum and some edt of this classic. This is sheer beauty in a bottle and like Diorella wears perfectly unisex. This is what Dior should be releasing again, not the syrupy floral messes of their current exclusive line.
#212405

purecaramel
Show all reviews by purecaramel
Sample of the Dior Dior Parfum.
Great thanks to Cook.Bot for this opportunity to taste a vertical of Edmond Roudnitska.

Eye roll! There is a giddiness that comes about and tickles the same spot as orgasm. I'm back to 10 years old and my first bottle of Eau Sauvage. Did Roudnitska ever produce anything ugly? Gosh this is lovely!

Oakmoss is such a magical thing. For me it pairs with the Citrus to create a Savon which then, puffs in a dimensionality, unmistakeable. Oakmoss Singular identifies itself for me as Butter Oil like clarified.

The Narcisse draws a rigid stripe through the centre. Muguet is there and then gone to return as a pulse after the Jasmine narcotics my brain cells.

As Parfum does, it produces a bubble or halo over my skin, a voluminous cushion of sumptuous-ness.

Although there is a Feminine tilt, I find it quite wearable as a dude.

Discontinued. Therefore no reforms.
All of which makes it quite dear.
My eyes will be watching.

jtd
Show all reviews by jtd
The 70s was the decade of the sequel and the greatest hits album. Its as if the late 60s had used up the cultural capacity for new ideas and reiteration was the new innovation. As the name implies, Dior Dior favored repetition over novelty.

All members of Edmond Roudnitskas citrus chypre family trace their roots to the voluptuous stone fruit chypres Femme and Diorama, but Dior Dior is better viewed against the other citrus chypres: Moustache, Eau Fraîche, Eau dHermès, le Parfum de Thérèse. Roudnitska investigated the fruity chypre, pulling a hint of decay from the common ground of overripe fruit and mature flowers.

Dior Dior owes much to the two perfumes that directly preceded it. You can smell whole pieces of Eau Sauvage and Diorella while wearing Dior Dior. The fruit is fresher than Diorellas half-decayed melon and despite a hefty dose of moss, Dior Dior is more straight-laced than Eau Sauvage. The lemon/aldehyde pairing recreates Eau Sauvages mouth-watering lemon-drop but overall Dior Dior resembles Diorella. It shares Diorellas general shape, but squeezes it into a girdle to suppress any errant curves.

With a brighter fruit note and cleaner florals Dior Dior comes off as more prim than its siblings. Compared to Diorellas sultriness and easy virtue, and Eau Sauvages cruisy Playboy After Dark vibe, Dior Dior is a prig. The hint of skank tempers Dior Diors coloratura topnotes, but only *just*. If Diorella reflected a chic, offbeat style, Dior Dior suited a debutante. First impressions matter. The lemony shine and choir of aldehydes create a peppy, Anita Bryant/Up-With-People cheerfulness that seems at odds with the turned-fruit styles of chypre that Roudnitska developed over the years.

Cultural tone aside, Dior Dior is an excellent example of Roudnitskas pursuit of simplicity. In his discussion of the art of perfumery he espoused the belief that richness doesnt require complexity. His sumptuous perfumes were apparently the result of succinct formulae. Generating plush perfumes from concise composition might appear counterintuitive, but Roudnitska proved his point. His perfumes couldnt rightly be called minimalist but they all have a feeling of perfect balance. Elements that dont contribute to a perfumes central goal have been edited out and the central olfactory ideas are diamond-like. In this respect, Dior Dior is classic Roudnitska.

rach2jlc
Show all reviews by rach2jlc
Perhaps the most "Roudnitska" Roudnitska One of the great Roudnitska scents, now sadly discontinued. For those who love the master's scents, this one will immediately be a hit, and immediately reminiscent of his work. I won't comment too much on the notes or character; other posters below have done that well. It's got all the Roudnitska trademarks... overripe melon, dark fruit, and some animalic funk beneath the base. It's perhaps the MOST Roudnitska Roudnitska... if this makes any sense. It's got the crispness of Diorella, the spice of Eau Sauvage, the funk of Eau d'hermes, the class of Parfum de therese, the freshness even of the late Ocean Rain. At the same time, it stands apart from all of these, with a character and backbone all its own. I understand why it wasn't popular, and why it is discontinued. It is a Roudnitska-lover's Roudnitska.. a scent that is hardly versatile, and one that will polarize. You'll absolutely love it, or absolutely hate it. Nothing in between. I was lucky to find a full bottle of the parfum, and loved every use of it. Random aside: I made friends with an elderly japanese parfumeur, who in her younger days worked under Roudnitska in paris. She now does bespoke scents in her own atelier in Nagoya. She knows everything there is to know about parfumery, and even more about her teacher Roudnitska. Her all time favorite scent is "Dior Dior." That alone is worth the price of admission. Pros: Depth, projection, quality, distinctionCons: Versatility, discontinued"
#131518

Mr. Bon Vivant
Show all reviews by Mr. Bon Vivant
The opening is a strong, animalic, realistic narcissus note paired with an almost over-ripe, fruity melon. There is a meaty note in the heart that is also found in Diorella, only it is more pronounced here. This is coupled with an oily note. The base is slightly sweet woods.

The melon fades out fairly quickly, leaving only a faintly fruity shadow as the fragrance evolves into its middle notes. The narcissus lasts a surprisingly long time, never quite giving up the ghost as it gradually transforms into an indolic jasmine. Aldehydes add some lift and emphasis to the floral component, some waxy aspects to the oily note, and some soapiness to the jasmine.

One review below calls Dior-Dior a smoky floral. Although there are no "smoky" notes to my nose, I understand the sentiment. It is a dark, brooding floral, the polar opposite of Diorella's sunshine. Diorella is a citrusy, mossy chypre with a hint of spice in the drydown. Dior-Dior is none of this. It is a deceptively simple dark floral over woods, but just as lovely in its own way. I sense the kinship between the two, but to say they are similar is doing a major disservice to each.

I tested the parfum and found that the longevity is good; I can detect it on my skin hours later. The sillage, though good to average upon application, decreases markedly after the first hour.

Add your review of Dior Dior Members who own Dior Dior