About Dia Woman by Amouage

Where to buy Dia Woman 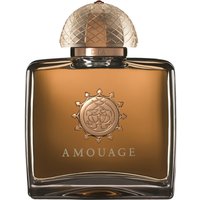 Reviews of Dia Woman by Amouage

There are 27 reviews of Dia Woman by Amouage.

Abbiss
Show all reviews by Abbiss
This is a typical Amouage fragrance. A vintage-like mix of a lot of stuff. After having smelled several fragrances from the house, I could say it's Amouage blindly.

HouseOfPhlegethon
Show all reviews by HouseOfPhlegethon
This one had me perplexed for a time. I have concluded it is an Amouage offering I could live with. I describe it as a woody floral. It seems to change its personality on my skin, depending on my mood.

Top and middle notes revealed for me are aldehydes, peony, white musk, sandalwood, incense, sage, and tarragon. The latter notes really give this scent its magic. When the middles notes settle it becomes powdery for me: heliotrope, violet leaf, fig, and cedar rise for their performance.

Dia is enchanting. She didn't show me her true personality the first few times I encountered her. Maybe she was shy. We are friends now.

#187533
D
drussell41
Show all reviews by drussell41
This fragrance has enough review that I don't need to add much except the following: the pre-reformulated EDT is an incredible fragrance that has a discernible, wonderful tarragon note that should be experienced by all who love that note (and aldehydes). That's all.
#168883

Shifty Bat
Show all reviews by Shifty Bat
I hope you like aldehydes. The rosy and orangey aspects of dia serve to prop up the tanginess of the top, elongating its opening statement through suggestion. Peony and peach soon after help this pinpoint impression bloom out on the sides into an orangey, daylight blush. The peaking frequency from the beginning is swallowed in slow motion and absorbed into the body. Woods and a thankfully soft incense emerge - a play in three acts, delicately layered to produce a certain sense of passing time; sunrise, sunset. Dia sings softly of intentional beauty.
#168012

rbaker
Show all reviews by rbaker
The fig note with tarragon makes for a pleasant opening, with a nice fruity-floral drydown that merges with a floral drydown sporting rose with a touch of other flowery component. A fairly light frankinsence with wood and a nice vanilla dominate the base on my skin. Elegant, but fairly pale and a bit dull on me, with moderate sillage, adequate projection and five hours of longevity. Nothing special.
#145597

Both the mens and womens versions of Dia are marketed as daytime complements to the respective genders Gold, but where the masculine Dia bears little resemblance to Gold for Men, the feminine Dia smells like a trimmed down and re-balanced version of the womens Gold. The volume is turned down by several decibels  particularly on the powdery floral accord. This serves to emphasize the frankincense that anchors the heart of the perfume while causing the entire composition to read as more staid and demure. However, given Golds cetacean scale, this slenderized sister scent is hardly an exercise in minimalism. Dia is actually a full-bodied, layered, floral-incense composition with an elegantly rounded profile. It is also, without question, more versatile and more wearable than the outrageously flamboyant Gold. Dia still offers plenty of sillage, projection, and lasting power, along with a very suave and ever so faintly animalic amber, incense and soft wood drydown.

What Dia for Women lacks, to my nose, is the distinctive character offered by its male counterpart, and by dispensing with its sisters over-the-top exuberance it misses half the fun. When spending this kind of money, I want a scent thats either utterly distinctive or gives a real sense of occasion when worn. Dia for Men satisfies me on the first count, and the womens Gold amply delivers on the second. Dia for Women smells wonderful, but its slightly shy of the mark on both criteria. So while I rate it highly, I probably would not buy it.

Add your review of Dia Woman Members who own Dia Woman