About Boss Number One by Hugo Boss

The first fragrance by Hugo Boss was launched in 1985. The name was changed in 1998 to 'Number One' due to the release of a new Boss. The fragrance contains notes of bergamot, honey and patchouli.

Where to buy Boss Number One 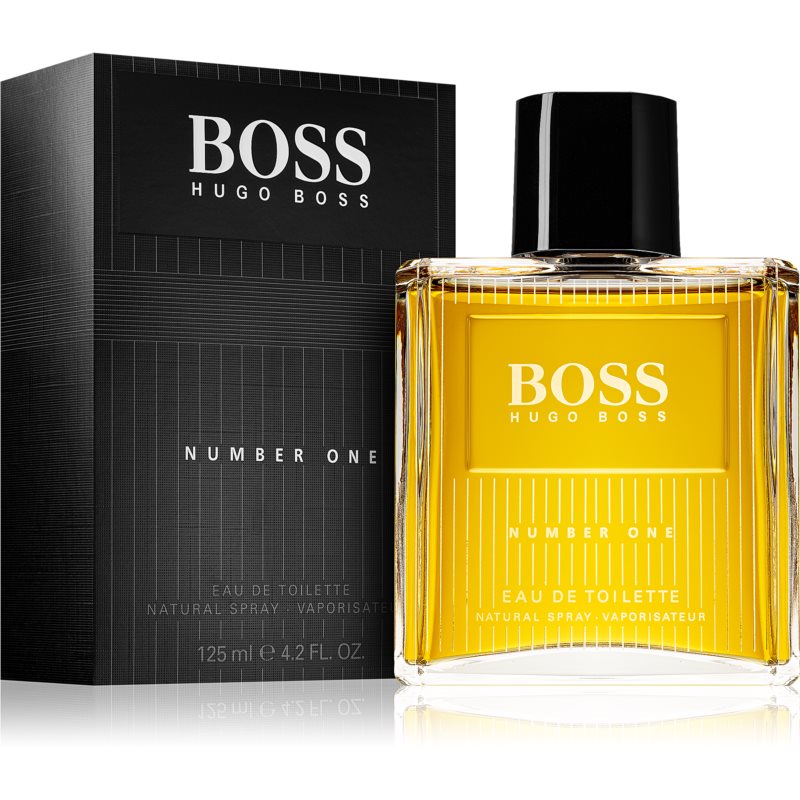 Reviews of Boss Number One by Hugo Boss

There are 77 reviews of Boss Number One by Hugo Boss.

eriqesque
Show all reviews by eriqesque
Boss number one. The report of my death was an exaggeration. This was and still is a powerhouse.
Citrus honey flowers and woods. Current made in Spain by Coty is almost everything it was.

Below is quoted from (NOVOSCENTOLOGIST on fragrantica) and is spot on.
Except cost now, is like 25% of original price.

Zenwannabee
Show all reviews by Zenwannabee
Lots to like here, especially if you're a fan of powerhouses. I agree with those that see the '70s heritage of this fragrance and I think the comparisons to Givenchy Gentleman are apt, especially the civet dirtiness. But a lot of Boss No. 1's appeal for me is just the honey and soapy base beneath the slightly uriny-sweetness. Bold, a bit brash, and really masculine. And I think the big angular bottle is just fabulous. Doesn't last all that long on my skin, but seems to hang forever on fabric. A great cheapie now that punches far above its weight.
#246079

aquila_2009
Show all reviews by aquila_2009
She falls asleep in his arms,his loving smile the last thing she remembers of the night.he is her man.a real gentleman.BNO is one of the sexiest vintage perfume a man should wear were he desirous of attracting woman.smells like smoking cigars after having hot sex.this heavy patchouli& honey combo makes it extremely powerful and masculine,especially by today's standards,where everything has be toned down, candy sweet and unisex.classy, elegant, charismatic,distinctive, bold,yet not vulgar.

The opening citrus notes-mainly lemon and bergamot-are well blended with the slightly animalic honey,the aromatic lavender and the soft but the dark rose,resulting in a notorious spicy effect.slowly the earthy patchouli begins to grow, beginning powdery and strachy,to become later slightly bitter and smoky,with a faint scent of iris, certainly due to the orris root note.these notes complements sweet tobacco and soapy greens to reveal to reveal a gentlemany,yet slightly boorish scent at the same time.similar to Aramis in style as they are both fairly rich. reformulated,yes but still remains a real male fragrance.

Man Of The World
Show all reviews by Man Of The World
So I must admit that while I have been aware of this fragrance for as long as I can remember I have never actually tried it. Original or reform. This was recommended to me by a fellow basenotes friend.

Number One is both clean and dirty. In the same way Kouros is. Although they do not smell alike. Honey is the main player. It comes into play around the 5 minute mark and remains until the end. This is not a sickly sweet honey. The honey is supported by herbal and woody/soapy notes. Would make a great office fragrance. Longevity and projection are both decent.

Sheik Yerbouti
Show all reviews by Sheik Yerbouti
Boss Number One starts off with a blast of alcohol but within 10 seconds becomes a sweet honey set against sharp herbs. The rose is present and apparent but doesn't take over in a singular soliflore kind of way. The honey is nicely blended with the rose and doesn't ever feel urinous like a previous version of Boss Number One I tried and found revoltingly horrid. I still sometimes shudder at the thought of that dark honeyed' scent.

I don't get anything like tobacco. As it transitions from top to heart there are some passing similarities in effect to Kouros. It gets very soapy and green with what registers as it dries down as juniper, sweet artemisia and the tiniest hint of galbanum. Throw into the mix a green apple' shampoo accord and this somehow veers further away still from the original. There's also a familiar treemoss/birch/ambergris accord and patchouli which keeps the scent going for hours.

This is a throwback to the 1980s but not because of any similarity to the original. Very powerhouse-styled without the stuffiness of many late 1970s releases but the emphasis being on a honeyed soapy amber and moss blend. If you enjoy classic masculine scents and didn't wear the original scent you might enjoy this. If you are used to the vintage this might not feel worthy. Not a typical fougere except in a dad's aftershave kind of way, but a welcome surprise to see a classic masculine in the midst of the current Boss lineup. Refreshingly enjoyable and will probably rock this with a crisp white shirt. 8.5-9/10

Update 16th May 21
Having worn this regularly for the past few months I am appreciating it even more than I initially did and have changed this to a 8.5-9 out of 10 up from 7. It's extremely well balanced, smack bang between herbal dry and sweet never becoming arid or cloying. I reach for this more often than I care to admit. Tremendously underrated in its current formulation.

Jon_Remy
Show all reviews by Jon_Remy
I currently have the version made by P&G Prestige Beaute. The vendor I buy from said the current distributor is Coty US, LLC, and is Made in Spain. I'm wondering if I should take a chance on purchasing the one made in Spain. I am hesitant as a lot of companies are watering down their formulations to cut corners. Is anyone familiar with the made in Spain version. It is weaker? Is is (fingers crossed) possibly a stronger version? Has the formulation changed? I have purchased fragrances recently, only to send them back because the distributor had changed and the "new" ones didn't last five minutes on my skin or clothes. Please advise.

UPDATE: Well, I took the plunge and ordered three bottles of the Coty US, LLC version. Well...I am NOT happy. With most fragrances nowadays being reformulated and watered down, I guess I should have expected that with Boss Number One. It is weak as water, and there is only a "hint" of the original formula in there somewhere. It's good that I have five backup bottles of the version made in the U.K., because the current one Made in Spain SUCKS! Suffice it to say, I will cherish my U.K. bottles and just use up the Made in Spain bottles as fast as I can to get rid of them. It has come to the point in my fragrance-buying history that I will no longer purchase those fragrances currently being produced, only vintage fragrances or high-end fragrances that at least smell like the originals, e.g., Chanel, etc. It's really sad that Coty US, LLC totally screwed up a once classic, beautiful, and very long-lasting fragrance for men, Hugo Boss' namesake! A lot of companies have either discontinued or reformulated their namesake fragrances, and now they smell nothing like the original. For example, Balenciaga is gone, Halston 101 is gone, Gucci Nobile, Gucci Envy, Gucci Rush, and Gucci "I," the original Gucci Pour Homme (with the Italian ribbon around the cap) are gone, as well as many of the women's Gucci fragrances. Now, Fendi Uomo and Fendi for women are discontinued an long gone. It's truly sad how the "new generation" of marketing bozos are taking over the fragrance companies and discontinuing fragrances they deem as "too old," or reformulating classic fragrances to the point they are no longer recognizable as the originals. Again, I'm done with any current or "reformulated" versions, and will from now on only purchase vintage whenever I can (either that, or stick to a fragrance house like Creed or Clive Christian, who maintain their original formulations, and stay true to them, instead of younger "geniuses" coming in an re-imagining classic fragrances to suit THEIR tastes and not the tastes of the original fans and consumers. Fragrance quality nowadays SUCKS, thanks to IFRA and the minority getting their way. Oh, the poor things complain about their allergies, etc., depriving the rest of us fragrance aficionados the joy of collecting and using great and classic fragrances. Truly a sad day for some of the classics that have been butchered, which will now most likely forever be discontinued because people like myself will REFUSE to pay for a watered down product, especially one that has been screwed with and/or changed totally beyond recognition. Also, beware of Nicole Miller for Men. It was once a lovely bourbon vanilla musk fragrance when made by Parlux, but, again, has become weak as water and nothing like the original since the distributor/manufacturer has changed hands.
#221991
Show more reviews of Boss Number One...

Add your review of Boss Number One Members who own Boss Number One