About Blue Jeans by Versace

A fragrance to represent the Gianni Versace Jeans Couture collection. A youthful fragrance packaged in a Coca-Cola style bottle in a blue tin.  The fragrance has immediate freshness. It is clean, crisp, sporty and youthful.  The Versace Jeans range is also available in Green and Black for men, and Red, Yellow and White for the ladies.

Where to buy Blue Jeans 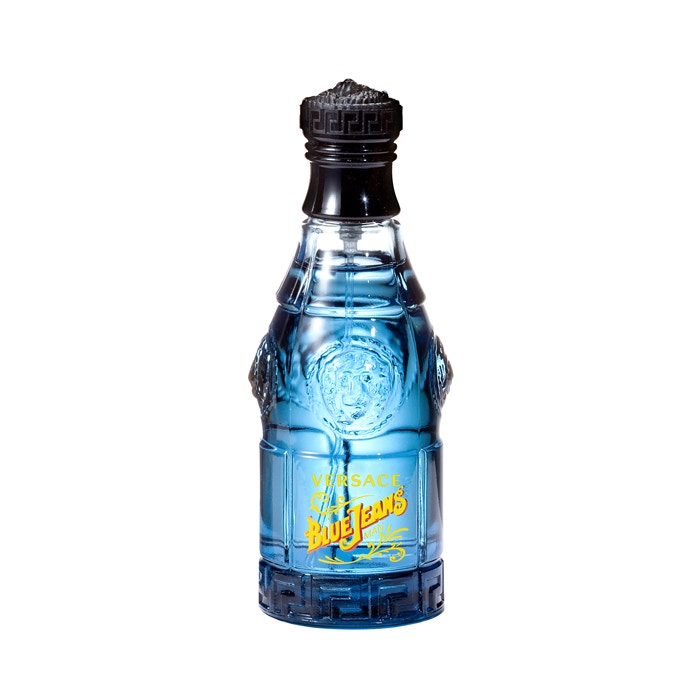 Reviews of Blue Jeans by Versace

There are 121 reviews of Blue Jeans by Versace.

71 Positive (59%) 36 Neutral (30%) 14 Negative (12%)
H
hentropy
Show all reviews by hentropy
Blue Jeans always drifted on the corners of my awareness- I am not old enough to remember when it was actively used, let alone sold in department stores. Indeed, the only place to buy this now is online or from independent fragrance stores or kiosks in malls. Never big enough for my local drug stores to carry it alongside legends like Drakkar Noir but still talked about enough. Now I know why.

Right out of the bottle it smells like, quite frankly, a mix of baby powder and citrus. There is something undoubtedly great about it, as baby powder smells the way it does because it is more or less universally appealing, and the added citrus notes makes it just different enough from baby powder that you wouldn't necessarily mistake it as such.

Blue Jeans never loses that powdery smell even as it transforms into a cocktail of very clean-smelling florals, once again, about as inoffensive as you get. The branding- putting aside the rather strange mash-up of Roman, Medieval Italian, and Americana imagery- as a "very casual" kind of cologne makes perfect sense at this point. There are a lot of notes in here from start to finish but none of them are challenging or meant to elicit eroticism, unlike the tabacco notes of its cousin The Dreamer.

It dries down into what feels like an overly familiar mix of woody, warm notes, the vanilla probably being the most dominant on my nose. If you were looking for a 90s scent that may have been everywhere at one time but is nowhere now, this is where it starts to smell a bit similar to many others.

Thing is, it will take you all day to get there because this thing projects a whole lot, and lasts all day with only a couple pumps. I'm not sure if this was the original performance or a part of a reformulation but it lasts just as long if not longer than a couple of Parfum strength fragrances I own, at an EdT concentration.

Overall I find myself fascinated by this thing from top to bottom, and can be a good choice for those who want people to smell their cologne but not be off-put by it. It makes me wonder what the flankers were like but since those are discontinued you basically have to have Creed money to afford them.

Ne Plus Ultra
Show all reviews by Ne Plus Ultra
This one was kind of disappointing. This scent has been out for nearly 30yrs, and I've heard it's in the hall-of-fame as one of the best of the cheapie fragrances...and, my reaction is...meh.

The first notes are a pungent lavender and the unmistakable pledge-like aerosol smell of a synthetic lemon scent.

After a half hour, the lemon-Pledge smell disappears, and for about 3hrs, you smell like lavender and Johnson's baby shampoo.

The last couple of hours, the lavender/baby shampoo scent mellows out, and the sandlewood creeps in. This is my favorite part of the scent.

A couple of things I've heard about Blue Jeans that made no sense to me after wearing the fragrance:

"It's a very youthful fragrance."

This doesn't smell youthful to me at all. Maybe, I was too young in the early/mid 90s; but I don't remember smelling this lavender/powder bomb on ANYONE in the 90s, let alone teenagers/twenty-year-olds.

"It's a long lasting fragrance."

It may have been reformulated several times. I don't know. But, on me, it's a 6hr fragrance at best. Sillage is below average. Most of the sillage comes from the lemon-Pledge top note within the 1st hour. After that, you might as well be wearing lavender-scented dryer sheets.

I know taste is subjective. But, quite a few people online talked very highly of Blue Jeans as one of those staple fragrances: a safe, cheap, classic scent from the mid 90s.

Maybe, some of the hype is due to the fact that there's the Versace name on the bottle. Or perhaps, some of it comes frome a place of rose-tinted nostalgia (sometimes self-admittedly) from these people. As for myself, I just don't care for it.

Seasonal wise; this is a spring type fragrance. This is a floral scent, so I could see someone wearing this outdoors: Picnics. Amusement parks. Fairs. Lilac festivals. Summertime is fine. But, I wouldn't wear this anywhere near the water (the beach, boating, etc), this isn't an aquadic fragrance by any stretch. Very casual. Nothing formal here.

The only reason I didn't give this a thumbs-down: It's cheap...and, I guess, you could do a lot worse for a fragrance around $20.

Again, maybe I don't like floral/powdery fragrances. But, if you do, go for it.

rbaker
Show all reviews by rbaker
Citrus notes greets me in the opening blast, with a good lashing of galbanum thrown in; with just a dash of juniper arriving soon after. Bright an opening this is indeed.

The drydown turns up the floral dial: a lavender that adds an additional bit of a green side, And a somewhat weak jasmine that is mint at all powdery on me. After a while a darker note is struck by the addition of a slightly crisp violet, which is given a gently spicy undertone by a restrained nutmeg impression.

The base is centered about a somewhat nondescript woodsy core, with a cedar component shining through occasionally, but I do not get much of any distinct sandal or any similar specific wood aroma. What I get, though, is lots of white musks.

This is moderate sillage, good projection and six hours of longevity on my skin.

As much as this fragrance gets savaged, I enjoy it. First thing I notice (the same way I would "notice" a brick to my face) is the galbanum. It comes at you in spades and stays along for the ride, like an ever-present in-law riding in the backseat of your car. It's not necessarily a bad thing, but you find yourself constantly distracted and looking in the rear-view mirror when you hear it chirping up. Jasmine, lavender and juniper are all smashed together, with nutmeg being surprisingly prominent. The pretty conventional base of cedarwood and sandalwood is tweaked nicely with the addition of vetiver, which when coupled with the galbanum, gives this a very cooling vibe to this scent, but it is something that I wouldn't recommend as a summer scent. This would do its best work in the spring and fall, day or night. Sillage on this is decent, and longevity-wise, this will last a good six-plus hours. Definitely a daytime/informal fragrance, living up to its namesake.

Blue Jeans is one of those "1990s in a bottle" scents, so for the "older" crowd like myself, this is a little bit of a nostalgia piece. That said, it's not something that I would wear out of any sense of irony. Although many scents from that era have not aged well (though that could be said for any era), this one is a good representation of that time, and one that really doesn't get the credit that I think it should. This is not going to be something that will make your top 5/10/whatever list, but it is a good casual fragrance. Thumbs up.
#217929

Sir Smell-A-Lot
Show all reviews by Sir Smell-A-Lot
Reminds me of Dolce & Gabanna The One. Doesn't smell as good as that but performs way better.
#203398

Abbiss
Show all reviews by Abbiss
I love the box. The opening is all about sweet lemon but it quickly settles to a woody/dryish Eau de Cologne with a younger feel. Its good, even if it could be more developed. Quite balanced, and not overwhelming in any way. Unisex.
#202742
Show more reviews of Blue Jeans...

Add your review of Blue Jeans Members who own Blue Jeans

J
Versace: Dylan Blue, Eros and Blue Jeans - when to use which?

Sep 18, 2012
Bobster
B
Search for Blue Jeans by Versace on the Basenotes forums.
Top