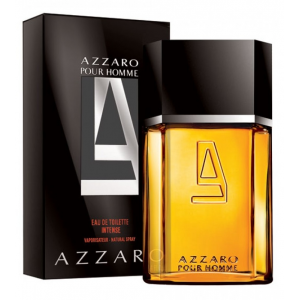 Professor Value
Show all reviews by Professor Value
I very much like Azzaro Pour Homme so, after reading many positive reviews of Intense, I purchased a mini bottle. It's similar to APH but different in a positive way and I like it. Still very much a barbershop fougère (slightly chypre?). It is not worth searching for and paying an overly inflated price, though, IMO. Much less of your money would be better spent on vintage Azzaro Pour Homme.
#265133

I will say this one could easily be a stand in for the original 1st version of Azzaro Pour Homme (oval cap), but unfortunately it is so rare these days that you actually have a better chance of finding an original partial or even full bottle. Stay in the hunt!

Azzaro Pour Homme aficionados will without a doubt love this, so if you can find it then pull the trigger as you will not be disappointed.

P
Poboijosh
Show all reviews by Poboijosh
This is a 'stellar' composition from top to bottom, opening to close. This is like a perfume all it's own that wears the Azzaro Pour Homme moniker. This intense version took the original into night time clubbing territory because this is a bold scent. It's quite strong for a long while.

It's basically a heavily ambered lavender and anise accord with a dark and head shop patchouli as a supporting note with a 'slight' animalic feel from the genet wild kittie cat. Genet to my nose is like a cross between civet and castoreum but here it's very restrained just to add body and as a fixative. It's a dark scent. It's balmy and aromatic. There's a lot going on here but totally pleasing for the entire ride.

This version in so many words to my nose is a modernized and simplified version of the original but with all the good parts amplified. So to recap, it's a simple composition but very well constructed. The appeal of the original formula is here in spades. You gotta wear this to get it but as soon as you do you'll get it. After discovering this eau de toilette '92 version I'm smitten. What an awesome perfume.

I've been doing this perfume business for a long while and this stuff right here, eau de toilette intense is super duper elusive. This scent is really really hard to get. I've been waiting patiently for months on end to snag a mini. Full size flacons are like unicorns.

This has a denatured alcohol content of 86% but do not allow that to fool you. This is a very long lasting sillage monster for many hours.

Shifty Bat
Show all reviews by Shifty Bat
A woody, sweet, bitter, and herbal fragrance which highlights natural-smelling anise and wormwood? If this also had some rose tucked in there it would pretty much sum up what I want to smell like most of the time. Just plain beautiful.

L
lairdangus
Show all reviews by lairdangus
Slightly amplified Azzaro PHOverall Rating: * * * * I recently acquired a bottle of vintage Azzaro Intense after reading EricRico's outstanding review below. Azzaro is my signature scent, but I sometimes find myself wishing for better longevity out of it (I get 6-8 hours out of the vintage, 4-5 hours out of the reformulation). As Eric and others have noted, Azzaro Intense is faithful to the original. Often, the "extreme" versions of favorite fragrances are so different as to be unrecognizable. That is not the case here. The heart notes and drydown of Azzaro Intense are virtually identical to Azzaro PH. There is a slight difference in the top notes, however, and one that does not favor the Intense. Admirers of Azzaro PH will note that the wasabi-like anise note are here overpowered by a strong fennel. It is a subtle difference, and not altogether bad. But I do LOVE that sinus-opening blast I get from the standard EDT version. Performance metrics, as one would expect, favor the Intense. I get 8-10 hours from the Intense, though a good part of it is as a skin scent. Like Eric, my preferred way of wearing Azzaro is to layer it. I tend to start with 3 sprays of the Intense and add an equal or greater number of the traditional EDT. This preserves those marvelous top notes while adding the superior longevity of the Intense. If you love Azzaro PH, you can't go wrong with this. It may not replace the original, but it can certainly complement it.Pros: longer lasting than Azzaro PHCons: top notes not quite as satisfyingly anisic"
#131749

ericrico
Show all reviews by ericrico
Very good review by Sporenburg (with one point I am going to defer on - see below) overall. I have mini Vintage bottles of Azzaro Pour Homme Intense that attest to the fact that it is deeper, more opulent and the basenotes are richer. It is not louder, but the depth allows it to be a more 'Intense' version. I have both Vintage and current formulation of Azzaro Pour Homme. Vintage is excellent and current is very good. The recent re-release of the Intense bottling was stated here on Basenotes - otherwise, I probably would have not picked it up (as I was keen on the Vintage version and considering a bottle price three times what I paid!) I will put it this way - as Vintage Aph is better than current, Vintage Aph Intense is, inherently (and truly), better than current Aph Intense.

I won't get into note replacement and an imperceptible fecal touch (which I have no clue about - that is something I do not get from any bottling of Aph Intense or regular formulation). I am not convinced that I want to, at this point, settle for current Aph Intense. While it is very good, rich and a nice warm (aura) scent like all bottlings of Aph, I find it to be a deeper progression of notes to heart and base that allow the scent to be more enjoyable.

The top notes being muted doesn't detract for me, but Sporenburg is correct in that. Longevity is a little longer than current formulation - again, an aura scent so you need to apply to pulse point, chest, and clothing that touches skin. It will not be loud (be definitely you will notice the power of the scent in the first 15-20 minutes) but expressive and radiant. A welcome addition to the wardrobe and one I will reach for.

For current formulation Aph Intense (and Aph): An interesting suggestion for those who want the sharper citric-anise opening is to do what I tried. Layer a nice neutral balm on your freshly-shaven skin (or beard/stubble, if you have that), apply a liberal amount of Aph Intense. Let it dry down for 5-10 minutes. Then, since you don't want to reverse order and bury the top notes you are trying to achieve, apply a few well-placed shots (including clothes, so it lasts longer) of the current Aph juice. I got the nice bright citrus to show along with more of the sharp anise. *Important to note - I would only suggest doing this with current formulations and not blend Vintage juice into the mix. It is simply too precious.

Sporenburg
Show all reviews by Sporenburg
No need to introduce Azzaro Pour Homme, by many considered the best fragrance for men ever. I tend to agree most of the times. But some admirers are convinced that through the years it lost some of its power and depth. How much is an ongoing debate. I belong to the camp that thinks it has indeed lost something of its radiance, although I also am a firm believer in the notion that our memories tend to play some tricks on us (especially when it comes to the power of fragrances.)

The solution should be Azzaro Intense Pour Homme, probably dated 2000, but I have read different release dates (some going back to the beginning of the 90s and one tv-ad really makes a good case for this to be true.) This Intense version must have failed commercially because so little is known of the fragrance (even this is the first review on Basenotes) and of course it is discontinued.

How do the two compare? Intense has indeed more volume but is not necessarily louder (and longevity is about the same.) The current Azzaro Pour Homme feels transparent compared to the Intense version which clearly is superior in the base, it feels full and opulent, displaying more character. On the other hand regular Azzaro possesses a better opening, that joyful citric-anise crispiness has been muted here, the anise replaced by fennel (probably to have one easy identifiable point of difference between both scents) giving it, an almost imperceptible fecal touch that I can only perceive on paper/cloth. I also can detect a slight sweetness in the heart that I can't remember in the original.

In short, if your love for Azzaro Pour Homme mainly concerns the development from heart to base, it is worth checking out, of course without paying the extravagant prices ($100+) one sees around. Comes in a nicely designed box. 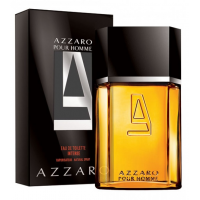