About Aqua Quorum by Antonio Puig

Released in 1994 to try and capture a younger 'Quorum' user. A fougere fragrance, similar to the likes of 'Cool Water' by Davidoff and 'Eternity' by Klein. The bottle and box are the same as the original 'Quorum', but instead of brown, it is blue.

Where to buy Aqua Quorum 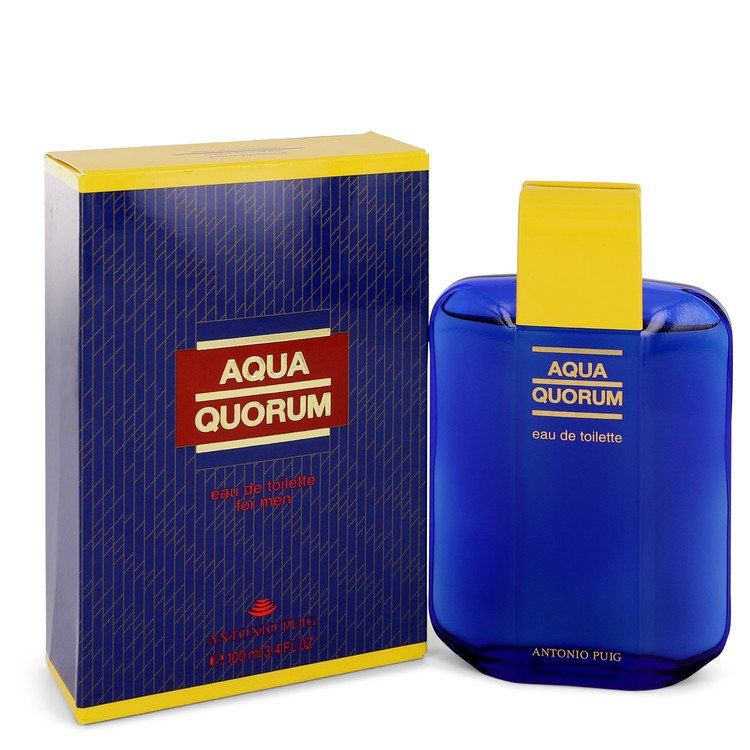 There are 28 reviews of Aqua Quorum by Antonio Puig.

La Forme
Show all reviews by La Forme
Nothing that will blow you away, but not bad. An average aquatic that you can fall back on since it's a cheapie. Aqua Quorum smells a little younger than Cool Water and original AdG. Rather weak compared to Quorum and lasts maybe two hours. After that it stays close to the skin. I'd say pass.
#221547

The problem with that, is the end result ends up being a dilution of the first fragrance it's imitating. It's basically a dull version of Calvin Klein's Eternity.
What made Eternity successful was its sharpness, there's notes that give its opening this bold vibe. It's like a stiletto. Aqua Quorum is like a butter knife.
Like Eternity, the dry down in Aqua Quorum gets powdery, but more so, and smells cheaper.

CONCLUSION:
It's wearable. The playful, colorful bottle and the neutered Eternity smell give it an immature impression.
At the price, it's a great deal, and I really like the bottle. But I why not just spend the extra $$ and buy Calvin Klein's Eternity?
The only other reason I can think of wearing this one regularly, is if you like Cool Water, but think it's way too sharp, with it's excess dihydromyrcenol, then this might be a good compromise.

vipersinthefield
Show all reviews by vipersinthefield
A very dull and lifeless aquatic and I'll clarify why.Lavender there's nothing wrong with but combine it with grapefruit?bad results.Grapefruit is a prime note in a fair bit of Adidas scents like Ice Dive and Moves For Him.Clean and citrusy...but also bright and metallic smelling.I get an Alka Seltzer leather out of this I guess to simulate a bubbly effect of oceanic based scents and it's just...boring.
#179150

Redbeard
Show all reviews by Redbeard
I actually had meant to buy Quorum Silver, which I may still try to get my hands on, but this stuff is at least serviceable. It smells cheap but not bad. It's an OK sweet aquatic, sort of reminding me of Polo Blue but with more sweet, floral top notes rather than the dry cucumber. It has a moderate amount of the fruity (apple?) component of Eternity or the old Nautica Competition, and initially this gets more intense as it progresses. The fruitiness almost reminds me of the shampoo-like components of Grabazzi or Horizon, which is a minor annoyance, but I don't find it to stick out as obtrusively as in those two. It's a bit metallic, but not as much as a lot of sweet aquatics or herbals/aromatics on the men's market. It ends up quite a bit soapier at the end, which I'm OK with, and keeps up its strength pretty well.
#144965
Show more reviews of Aqua Quorum...

Add your review of Aqua Quorum

Other perfumes by Antonio Puig Members who own Aqua Quorum