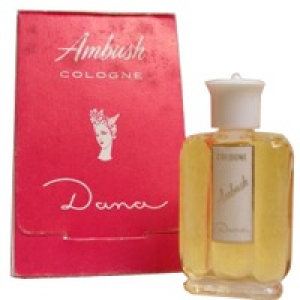 Add your review of Ambush (original)

Reviews of Ambush (original) by Dana

There are 9 reviews of Ambush (original) by Dana.

jtd
Show all reviews by jtd
Ambush is a bit of a gender-fuck. It was a perfume for women, based on a perfume first designed for women but then marketed to men, Dana Canoe. Both were composed by perfumer Jean Carles.

Canoe was a fougère initially marketed to women. It turned out that Canoe fit the masculine barbershop style that was taking shape in the USA between the World Wars, so it was repurposed for men, who bought it in droves from 1932 to the present. There's no record that it was reformulated at the time, just repackaged.

Canoe fits the classic American take on the fougère. It was launched at the end of the Depression and though it was initially produced in France, WW II brought production to the USA, where it became a huge success. It was herbal and floral like the classic fougère but less angular, more harmonious. It emphasized the musky-sweet side of the fougère formula with an oily-powdery quality and would come to define the barbershop sensibility. It became the definitive American fougère.

After the Depression and WW II, American gender lines were drawn in bold and the fougère landed squarely on the masculine side. It became masculinity coded in scent. Carles pulled off an interesting trick in designing Ambush as a women's perfume. He took a men's grooming' scent, touched it up with notes from women's cosmetics, and called it feminine. Madison Avenue knew how to sell gender with an underlying threat of ridicule, so hygienic/grooming products were marketed with strong gender markers. Carles's repurposing of the fougère for feminine use should have shown the gender line to be akin to the Emperor's Clothes. But who in 1955 America would have been tactless enough to point this out?

Ambush's compositional trick was a heliotrope accord. Heliotropin was a well know material and its vanillic-almond range of tones could be shifted one way and another depending on the context. It gave a matte quality to floral perfumes and a marzipan note to vanilla-orientals. It was also a common component of cosmetics at the time. In Ambush it gives a plasticene quality that fits both the sweet, musky base of the perfume and the aesthetics of the era. It lends Ambush a stiff, molded character appropriate to mid- century fashion and design style, leaving Ambush the furthest thing from a skin scent'. No Jean Carles formula was ever simple and heliotrope is one note among many in Ambush, but it's a pivotal component. It creates a distance between Ambush and Canoe at the same time that it harmonizes with the fougère accord. It marked the fougère as feminine.

The marketing for Ambush was centered on the suggestive name of the fragrance. It equated gender and sexuality, a largely unquestioned pairing in the mid-'50s. It phrased femininity as predatory heterosexuality. Men were objects to be stalked and taken down. The ads over the years riffed on images of coy women hiding behind palm fronds, peacock feathers, spider webs, etc. with copy such as, A Romance in Every Bottle. Ambush…The Tender Trap. and Take Him Completely by Surprise. Stereotype? Camp? Yes. There's even a bit of homoeroticism. An ambush' implies deception. The unseen man of the ads is caught unawares, taken from behind as it were. Was the predator a woman in wearing Ambush or a man in Canoe? Which would he prefer?

Dana perfumes changed ownership more times than you can shake a stick at, leaving the lasting impression that Dana was a drug store brand pulled out for father's/mother's day-Christmas gift packs. The last bit of gender irony is that the company that currently owns Dana (but no longer produces Ambush) is Patriarch Partners, a company named and owned by a woman.
#173976

C
cmac
Show all reviews by cmac
Jack, your comments on Ambush are interesting, especially your list of ingredients.
I submit that Ambush is a (slightly mixed up) floral chypre. Using the Basenotes list of notes, oakmoss is a mid-note, not a base note, and patchouli is the base. Maybe to help counteract all the sweetness. Make no mistake, the original Ambush is very sweet!
It was my first scent that I wore when I was 13, in cologne form, of course. Women wore Tabu, girls wore
Ambush.
As far as the old Canoe-Ambush debate, yeah, we were talking about it in the sixties. We all tried Canoe on, to compare, but none of us wanted to wear it.
Dana now calls Canoe a classic fougere, but lists musk in the base. Is this really a" classic" fougere?
There are some similarities in scent, probably from the citrus top notes, and the patchouli base, but Canoe doesn't have the heavy floral heart that Ambush has. My crowd thought Canoe smelled like aftershave, and Ambush was girly.
So, Ambush doesn't seem fougere to me at all, I lived in its' heady and heavy florals for a few years. I do agree that there was carnation in there also.
#143592

J
JackTwist
Show all reviews by JackTwist
I agree with Mysticman that this is very close to Dana's CANOE - like that 1936 classic, this is a fougere with pronounced lavender and bergamot notes. Odd that Dana would put this formula out with a new name and attempt to lure feminine buyers twenty years after Canoe's debut . It may be that Canoe was such a hit and more with men than with women, that Dana wanted to regain the lost lady audience.

It still doesn't seem right for women - still seems to me that fougeres belong with men alone. One type of scent that is never unisex. Still one of the great fougere formulas, regardless of what Dana does with it.

First Edit- The more I smell this, the more I detect an anise/tarragon heart that is not mentioned in the ingredients. However, this does not take it out of the fougere category, just further shares the ever-evolving note experience.

Second Edit - There is a pronounced caraway seed note when initially applied as the bottle is near to empty. Interesting.
#148974

Mysticman
Show all reviews by Mysticman
Almost identical to Dana's Canoe for men (which actually started as a feminine scent), but in a somewhat deeper and richer formulation. The topnotes of citrus, lavender and heliotrope are distinctive. It's floral, fresh, light and moody all at once, and like Canoe, seems better suited to foggy or even rainy weather than to summer sunshine.

This is definitely a product of a simpler time, and evokes the era of the late 50's and 60's. Too bad it's not sill available to allow modern folks a chance to experience one of the classics of another era.
#132913

B
buren
Show all reviews by buren
I really liked Dana's Tabu for many years in spite of its potency.

However, when I tried Ambush, the tangle between sweetness & patchouli didn't work for me....There seems to be a lingering sweetness in both Ambush & Canoe that is more than I want.
#112954

K
kbapril23
Show all reviews by kbapril23
I love Ambush and have for years. My aunt introduced me to Ambush when I was 13 or 14 and I have loved it since. I would give anything to have the old Ambush back or to find someone who could make this scent for me. I still have some I am hanging on to on the off chance that I can someday find someone who can duplicate this scent for me.
#63871

tsar_perknip
Show all reviews by tsar_perknip
When I heard they'd changed the Ambush formula, I immediately went out and bought a bottle of the old formula. Like the other reviewers, this is the smell of my mom in the 1970s. I held on to it for a while for sentimental reasons, but now I find I really enjoy it on its own merits. There's a sweet powdery smell to it, a little like Love's Baby Soft. Now I'm cautiously rationing it out to make it last.
#47258

F
Freshstart
Show all reviews by Freshstart
A child, in the seventies, this was the gift I gave to my mother. It became her signature scent, replacing Chanel #5.Now that this is no longer available, it is back to Chanel for mom. She has kept a bottle of it, when I hoarded tons forher, and when I visit, I smell it and it brings me right back to our younger days.
#47326

Adryen
Show all reviews by Adryen
I was lucky to be the youngest of 5 kids, 4 females! I had the chance to try on many perfumes (the good old ones) from the '50s and '60s. Ambush was also one of the ones my mom used occasionally. I liked the floral notes of this scent. There was a playfulness to the blend. I think I had a bottle in the '70s, but haven't used this in years. Always did enjoy wearing it, though!
#58025 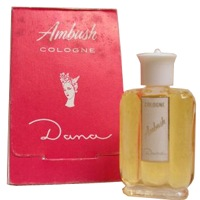