Unlike most fragrances, where the notes dry down using the traditional pyramid structure, Allure is different. According to Chanel it is "Multi Faceted" and "cut like a diamond with six facets which overlap, with no single note dominating". An EDP was launched in 1999. 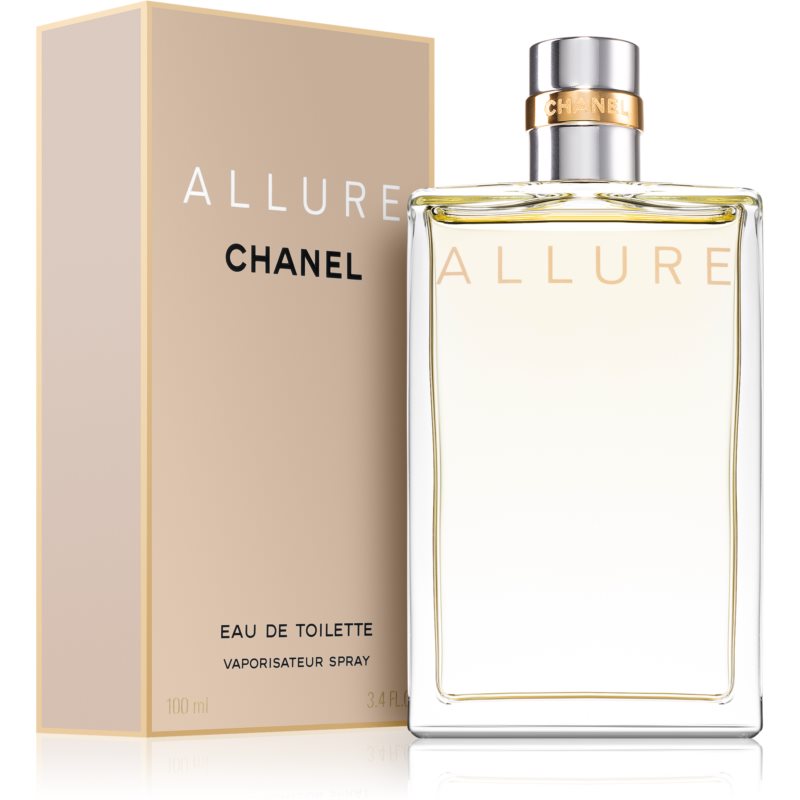 There are 35 reviews of Allure Eau de Toilette by Chanel.

rbaker
Show all reviews by rbaker
A white floral opening of magnolia and lily, a touch of a somewhat nindescript rose in the opening, with a strong peachy accord and a hint of orange on my skin. A sweetish jasmine further enhances the floral notes, to merge into a vanilla drydown that is not particularly special. A bit unexciting, with good sillage and projection and six hours of longevity. 2.5/5
#150569

Claire811
Show all reviews by Claire811
Gorgeous, feminine, my favorite vanilla-floral fragrance. I adore this scent.
The opening is fresh and floral (a beautiful bouquet of Chanel flowers), I can detect mostly honeysuckle and jasmine with a hint of citrus. The vanilla drydown is to die for.
It's so elegant and classy. I prefer the EDT over the EDP which is creamier and more powerful but I perceive (maybe the peach) a synthetic note.
This EDT is highly recommended if you love subtle vanilla floral scents.
Definitely one of the best feminine perfumes around.
Suitable for every season and age (from 30 on). It's just perfect, divine.
I LOVE it.
Thank you, Mr Polge for this modern, subtle, sophisticated, feminine masterpiece.

rogalal
Show all reviews by rogalal
Sorry Chanel. I'm often a fan, but this is just a generic pink pepper fruity floral. From 1996, this may actually be the perfume that started (or at least popularized) the genre, but that's not enough for me to enjoy this.

It's got a fairly nice peach skin top, with just a pinch of powder underneath, as well as an unusual chemical buzz that makes the whole thing smell fuzzy and comforting. Then there's that fruitchouli pink pepper base, which is apparent right from the start. Eventually, the fuzzy peach makes way for a slightly clovey mix of carnation and other florals, but the star of the show is always that sweet pink pepper.

I apologize, but here and now in 2012, when some mediocre designer or celebrity wants to put out a perfume that smells like everything else, it smells like this, so it's really impossible for me to give Allure anything but a thumbs down, despite any possible historical significance or my respect for the house.

#120531
L
LondonGirl
Show all reviews by LondonGirl
I was given a sample of this when it was first launched, and on the strength of that bought it on my next holiday. It was mainly the warm vanilla notes that appealed to me, but even so, it was a slightly unusual choice for me, as I am not a fan of oriental notes. I loved it for a couple of years, and even got as far as a second bottle, but I now find it quite unpleasant, with a very synthetic tone to it. Maybe I have kept it too long, and it is past its best. But certainly when it first came out, I found it very appealing, and very unusual; and I still can't think of anything I have smelt that is similar.
#116868
S
sofababe
Show all reviews by sofababe
The opening is harsh, sharp and made me wonder if I was actually testing the right bottle (I had smelled it on a friend and adored it instantly) but given half an hour its the most amazing scent!! I only have a small decant courtesy of the aforementioned friend but I'd love to own a huge bottle of Allure. I'd better start saving! Allure is, IMHO, better than Sensuelle. I like both but Allure is more sophisticated, without the patchouli blast of its sister.
#107094
E
Eaudelove
Show all reviews by Eaudelove
Just sensual, sexy, and the fragrance that makes me feel soft, feminine and pretty. One of the first I bought that I still have. Just a little have that I don't want to use the last of.
#101278
Show more reviews of Allure Eau de Toilette...