This very distinct sweet fragrance is one of those you either love or hate. Based strongly on the ladies Angel; A*Men (Angel Men in the US) contains unusual notes of Chocolate, Coffee and Caramel. Most of the notes are "edible", so this would appeal to anyone with a sweet tooth. Funky bottle too, which is also available encased in black rubber, that is not only looks stylish but is ideal for travelling.

Where to buy A*Men / Angel Men 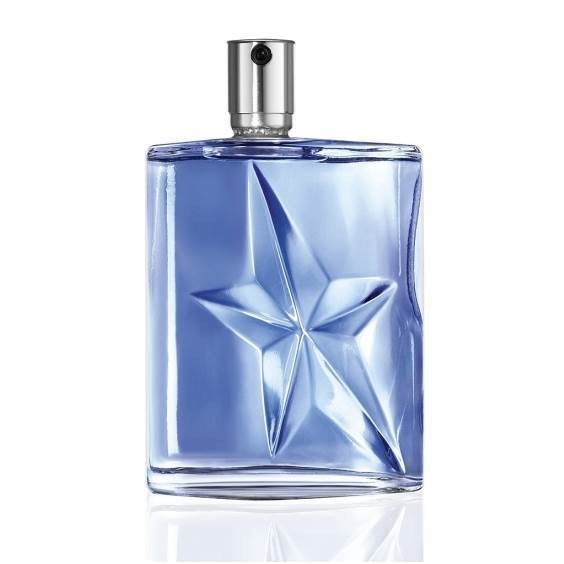 There are 503 reviews of A*Men / Angel Men by Thierry Mugler.

I'm not sure which one turns more heads, Angel Men or Boss Bottled.

Caramel and tar is what I notice but it usually is the Sandalwood note that attracts the ladies.

Boss Bottled has a cap so it is better for travelling but while at home, I may choose this as my primary fragrance!

knightowl
Show all reviews by knightowl
This is best worn by spraying on the chest and sniffing under your shirt every now and then. A colorful but dark circus of a fragrance.
#230607

Andyjreid
Show all reviews by Andyjreid
"This is too sweet" were my famous last words every time I tested this fragrance in a store.

I even had a sample but could never bring myself to wear it because it's too sweet.

Well now that my B*Men seems to be coming to an end I thought I'd actually give this a wearing and to my surprise it is deceptively masculine. Once on the skin the sweetness becomes quite faint on me and I get more of the tar/coffee/patchouli/tonka/musk for most of my wearing of this.

There is an initial burst of citrus at the start but I am happy to say that for most of my wearing I'm getting the above listed notes and I am more than mildly surprised.

I am really glad I never 100% wrote this off and I am now hovering on this being bottle worthy.

500DaysofSemmler
Show all reviews by 500DaysofSemmler
EDIT: On additional wearings I suddenly "get" this one a lot more. The patchouli has this nice almost powdered sugar vibe to it. Yes the tar is kinda weird and I was turned off by it it at first, but I think it has it's place. Sorry for judging you so hard, A* Men. You're still not a fave, but you're not bad at all. Definitely interested in trying the flankers
#220546

notspendingamillion
Show all reviews by notspendingamillion
Tar, coffee, carmel, and patchouli give this a distinct opening. Strong and heavy. Winter only. Not a closed quarters fragrance. Was not impressed back in 2003 when I first smelled this, but it has grown on me. Worn more for myself as my wife does not like it. Good longevity and heavy projection.
#212879

Varanis Ridari
Show all reviews by Varanis Ridari
The original gourmand for men this is often called, and Thierry Mugler was quite the rebel for releasing it at the time. The scent of A*Men (1996) is a love/hate sort of thing, as was the original Angel (1992) perfume for women, and an acquired taste for those who eventually love it, much like beer or liverwurst. The "Beige Age" of the 1990's was in direct reaction to the almost hedonistic excess of the 1980's. Credit lines were spent and maxed by the beginning of the decade, the middle class in many Western countries (particularly America) were beginning to be divided up into the entry-level upper classes or the working poor, plus art reflected the mood with baggy dressed-down androgynous looks, simple chord-focused music expressing angst or street life, and apologetic fragrances meant to "blend in" rather than stand out. Life sucked unless you were one of the emerging private-sector oligarchs vacuuming up profits from a decade of "trickle-down" Reaganomics, showing off your newest platinum-coated hypercar or personal 747 jumbo jet, but you had some counter-culture elements in arts or entertainment to give us a little bit of excitement, joy, and hope. Independence Day was returning the concept of the large-scale blockbuster to cinemas, bands like Hootie and the Blowfish were obstinately optimistic when nobody else was, and A*Men was a complex contrarian of a scent using edible notes and aromatics at a time when everyone wanted to smell like dryer sheets to avoid interaction. The gourmand wave that ran counter to all the aquatics and freshies of the decade began courtesy of this little number. Remember folks, A*Men released in 1996, not 1986, and concurrently with epitomes of 90's fresh pleasantness like Acqua di Giò pour Homme (1996) and Curve for Men by Liz Claiborne (1996). The smell of A*Men is so lauded because it blends the ordinary with the strange, offering something that pushes you outside of your comfort zone long enough to almost pull away, then brings you back with something to make you think about it and stick around for what's in store for you next. Patience is needed to appreciate A*Men, and I can't blame anyone for bailing out on it, because it is rather unsettling at times, but the dry down is where the legend of this one lives.

The extremely bizarre opening of A*Men by Thierry Mugler is caused by a huge whiff of a synthetic called helonial, an aldehyde derivative of heliotrope and something rarely found in perfumes made for people, but typically seen in commercial fragrances for laundry and dish soap. It's metallic accord is more common in your favorite variety of Palmolive than in any of your personal fragrance choices, and it's paired with peppermint to make it even scarier. Lavender and bergamot bring you back into the comfort zone just long enough for the sticky accord of coffee and tar-like styrax to emerge, offering both the desiccating dryness of fresh ground coffee beans and animalic stiffness styrax affords, before a smooth patchouli note comes to the rescue. This patchouli remains for the rest of the wear, but is joined by chocolate, caramel, and vanilla, offering further culinary association which earned A*Men it's pioneering gourmand label, providing a scrumptious skin finish that is sexier than it has any right to be by the end of the wear. Tonka bean and musk bring in a late-stage fougère accord which is the final pull back out of the strange and back into the familiar, with the wild see-saw ride of notes ending in green patchouli-lead aromatic fougère territory with hints of cocoa and coffee remaining. I don't know if perfumer Jacques Huclier is a genius or a psychopath, but Mugler has retained him for many more releases, including several A*Men flankers, so he must be doing something right. A*Men might be that tall dark kid wearing the trench coat everyone feared in high school during the 90's, but like most who dressed that way, he's really just misunderstood, soft-spoken, and not the least bit violent. Guilty of bad taste in music maybe (usually death metal or goth rock), but once you get him to sit down and talk, you realize that he likes smiling and laughing just as much as the rest of us. There's the initial shock, then reassurance, more shock as things develop, then more reassurance, and finally, you've made peace with the experience and share the joy. A*Men is not huge on sillage, but it is a challenge to strangers, does last quite a while and can cloy in hot weather, so keep it to colder months and casual settings where folks won't look askew at you.

Future gourmands inspired by A*Men would turn up the food-derived richness, become more approachable, closer to an oriental in my opinion, and ditch the confrontational notes like helonial or coffee beans. Yeah, niche houses have since come to play with stuff like that, especially if you fancy Lush or Etat Libre d'Orange, but remember that Thierry Mugler isn't some high-end expensive niche perfume brand that expects to move bottles only to the converted few willing to take the plunge, but a mainstream perfume house found in every Macy's, Nordstrom, JCPenny, and even some Walmarts or Targets across the globe. With that in mind, releasing this scent must have seemed like career suicide, but it was a risky gambit that gave birth to many gourmand favorites in years since. Givenchy Pi (1999), Yohji Homme (1999) Rochas Man (2000), Lolita Lempicka Au Masculin (2000), Spark for Men by Liz Claiborne (2003), Avon Tomorrow for Men (2005), Burberry London (2006), Dolce & Gabbana The One for Men (2008) and more all owe their existence to A*Men by Thierry Mugler. It honestly took me more than a few tests to really come around to this. The first time I wore this I was like "ack this is horrible", then the second time I was like "okay, this is more interesting than I thought", then the final time I was like "oh, okay.. I get it now". Granted, there are many people that will justifiably never get acquainted to this scent, and that's okay. Just as some folks will never get over the gasoline opening of Fahrenheit, or if we go further back, the urine-like opening of Moustache by Rochas (1949) or even the animal-bomb of Guerlain Jicky (1889). The point of challenging fragrances is to dare the observer to open their horizons, to perceive beauty where traditionally it might not be, although there is a very fine line to walk between challenging and just plain stinky. Thumbs up, but with the caveat that a rebel like A*Men is not for everyone, especially not the meek or mild. Members who own A*Men / Angel Men