About 1 Million Parfum by Paco Rabanne

Where to buy 1 Million Parfum 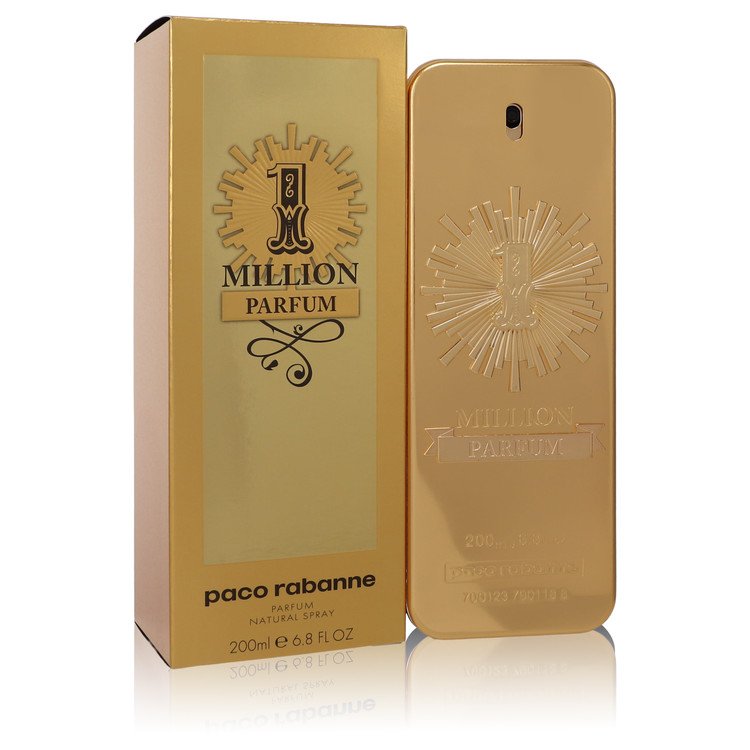 T
The_Harlequin
Show all reviews by The_Harlequin
Not really a fan of this, I thought it was the original 1 million, it didn't click with me that it was a different version. I gave it a try and it just doesn't do it for me, the smell doesn't really catch your attention and I've had zero hit's from the ladies with this version.

I'll still give it a chance through longer usage, to see if my opinion changes about it, but for now, i'd rate this as a strong pass.

primotenore
Show all reviews by primotenore
Blind bought this juice after reading some positive reviews and having a modicum of confidence in the house of Paco Rabanne. To be honest, the only other scent I have, is a vintage bottle of the Pour Homme EdT. Now, to this...smell.

This is the EXACT timeline and I stray not from the facts.

Bottle arrives yesterday.
Cracked the cellophane and admire the box and the bottle.
Squirted the teeniest of sprays into the air. Literally the juice dribbled out.
I thought to my self...wow, that's potent stuff.
Later that evening, I decided to try ONE spray on the back of my left hand.
My olfactory senses are blasted with a monstrous, sweet, fruity...something.
I am astounded at how explosive this smell is.
I wait around, hoping the dry down will tame this obnoxious beast...nope.
Go to bed and I cannot find a position that doesn't send this cacophony of disgusting stench into my face. My poor wife. I tuck my hand under the covers and pillow, but only succeed in transferring the smell to the sheets and pillowcase. UGH. Now what? 2-3 hours later, still tossing and turning with a side case of extreme buyers' remorse...no, stronger, REGRET, I get up and scrub the back of my hand with soap and scalding hot water. While this doesn't really remove the stench, it did allow my extreme fatigue to win a short-lived battle against the onslaught of wretched fumes.
It's 5:30am the next morning and as I type this "review", although, it should be considered to the reader as a WARNING, I can STILL smell this crap on my hand. I am leaving it there until my shower, as a warning to my self and everyone, who might read this: STAY AWAY FROM THIS CASTASTROPHE. Quite possibly, the worst perfume I have ever experienced in my life.

rbaker
Show all reviews by rbaker
The opening sent of floral notes is centered sound a pleasant tuberose, which is quite intense but not heavy, and lacks any waxiness or indolic undertones. At times his of sun tan lotion creep in, but only weakly so; this is No Bond No.9 Fire Island. Shades of muguet also come and go.

In the drydown a slightly salty note develops. A bite like a synthetic ambergris, which is combined with an ambroxan, later to be pushed aside by a soft and supple suede note, which is sweet due to some creamy vanilla still, yet carries with it touches of labdanum. There is a nonspecific woodsiness to it towards the end.

I get strong sillage, excellent projection, and a superb longevity on twelve hours on my skin.

The beginning of this spring is quite well done and quite interesting, but later in it just becomes so egregiously generic in an overly synthetic manner. Overall 2.75/5

Varanis Ridari
Show all reviews by Varanis Ridari
Nobody saw this coming, and I mean nobody. Not niche aficionados on forum boards and Facebook nor compliment junkies on YouTube and Instagram, and certainly not the general public vaguely aware that the original Paco Rabanne 1 Million (2008) even comes in so many flavors as it does because the original is just that strong in sales. Yet here we have 1 Million Parfum (2020), an altogether different beast from either 1 Million Absolutely Gold (2012) and 1 Million Intense (2013), both now discontinued leading up to the launching of this. What's more surprising than Paco Rabanne rebooting an intense version of their star clubber for the second time (making the third iteration), is the fact that it smells the least like the pillar release among the three. What's more surprising than that is how it actually smells. Perfumers Quentin Bisch and Christophe Reynaud composed this (with Reynaud returning from the original yet again), and most of the reason this smells the way it does can be attributed to a vacation bag accident when broken bottles of sunscreen mixed with a labdanum sample Bisch had received. The rest is obviously aromachemical magic but what gets me is how much of a polar opposite this is from the one that started it all. Considering everything previously had at least a drop of 1 Million DNA somewhere in it, this parfum seems a bit like a gamble for the line. Hmmm....

In any case, I've held you in suspense long enough. 1 Million Parfum is primarily a woody amber, but what makes it special is tuberose. You heard me right, this is a men's fragrance with tuberose in the core. The note is often found in sunscreens (which don't have gender assigned typically), and Bisch merged it with some bright aldehydes and the essence of manoï oil, a special perfume made of Tahitian gardenias soaked in coconut oil. The tuberose isn't going to gobsmack you like in an old 80's perfume for women, but like Richard James Saville Row (2003), it's detectable. Bisch sure was busy replicating his vacation here in 1 Million Parfum, and it doesn't stop into the base (the perfume has no heart). A salty beachy ambergris note (achieved with a compound containing some form of ambroxan/ambroxide obviously), is mixed with vanilla, amber, cashmeran, labdanum, and that popular suede leather molecule everyone from Coach to Tom Ford is using now. I get some banana vibes here too but that's just me, and keep in mind 1 Million Parfum is still very much a sweet creamy fragrance like the original. If the OG is your nightlife scent, this could be your daytime getaway scent, with the pair of them being your best friends on a trip to Tahiti. Send Quentin my regards. Wear time is long at 10 hours and sillage is dense but not overly projecting. This is a parfum so it behaves that way, sitting close after the first hour. Suggested use is going to be the beach or a warm dry summer day, but with some serious caveats.

1 Million Parfum is not aquatic nor conventionally fresh, so if you're looking for that, stick with something blue. Considering Absolutely Gold was sold in the Middle East and 1 Million Intense was made a unicorn in short order after it's run was stopped, I'd not give high hopes to 1 Million Parfum staying available for long, especially with it being tuberose, sunscreen, beach sand, and a suede handbag in a bottle. Fans of stuff like Jil Sander Sun (2002) may see this as a throwback to when beachy masculines were common, and Dolce & Gabanna also tried something like this recently with Light Blue Sun for Men (2019), but not with same conviction. 1 Million Parfum is a fragrance that feels like its made either for or to channel the aesthetic of a rich playboy who can still afford extravagant vacations to Ibiza or the Polynesians in 2020, which admittedly feels a bit too socially-oblvious even for a gaudy designer like Paco Rabanne, but folks in this industry aren't known to be aware of the Human condition, or their 2020 perfume releases would all smell of turmoil, climate change, pandemics, police brutality and a political slide into authoritarianism. If you need something to help you forget all that, maybe 1 Million Parfum is just the kind of medicine you need. I think the stuff is interesting and fun to wear but I'm not sure 1 Million Parfum is going to sway anyone not already on board with bottles shaped like gold bars to the line, depsite it's niche-like conceptual construction. Thumbs up.

speedracer
Show all reviews by speedracer
I like this better than the original and Prive, both of which I own. Hmm, might have to add this one too.

Beachy, white floral opening with a warm, amber base. Smells like something my wife would love to wear. Easy compliment bait as she really liked it and I received a compliment from another female on first wearing.

Other than both scents being sweet, this seems to be something quite different from the original. Not as loud as the original but it does project during the first few hours very nicely. It's also the more smooth and rounded scent. The beach+florals scent is what really sets this apart from the original. Lasts for 2-3 hours and then you get a soft, amber-vanilla that lasts for many more hours but much closer to skin. It's very unisex to me.
#232661
Show more reviews of 1 Million Parfum...

Add your review of 1 Million Parfum Members who own 1 Million Parfum