Each week in Indie Perfume Brand Spotlight, we will question different brands to find out more about their brand and the people behind it. This time we question Callum Rory Mitchell from Perdrisât. I’m a Leo. I’m 29 years old. I was born and raised in Melbourne. I studied Fine Art, majoring in Sculpture and Spatial Practice. When not making perfume, I make movies. Mostly comedy. I like to think my aura is buttery yellow. My favourite smells are waxy lipstick, freshly grated carrots and clove cigarettes. My favourite season is Summer but I’m not outdoorsy whatsoever. I consider myself introverted, but am apparently an ENFP. If I were an animal, I’d be a Golden Retriever. If I were a fruit, I’d be a fig. And when it comes to perfume, I’m self taught, and very new to the entire world, and equally, very grateful to be here.


How did you get into the perfume industry?

I wanted a specific leathery perfume, and couldn’t find anything that struck a chord with me, or more specifically, with my skin. I was determined to create my own personal scent. I was curious about these fantasy notes, considering leather is more of an idea than a direct ingredient, so I sought to understand the mechanisms and logistics of perfume-making. I found myself obsessively researching online, mostly blogs (thank you, Basenotes!); typing questions into search engines, naively ordering materials from across the globe. It was a mess. I had too many materials and no starting point. Initially, I just wanted to create something leathery and smoky. So I went hog-wild with birch tar. After my initial trials, I asked my sister her thoughts on my first few scents, and she said they all smelled like fish food. I didn’t lose hope. Persistence and curiosity kept me going at first, but then came the rewarding feeling of actually creating a scent that is not only evocative but equally wearable, that took time to happen but once it did, it was sublime; it is such a beautiful personal accomplishment. I love it. Somewhere along the way, I was able to turn this passion into a fledgling brand.

When I was a teenager, my father would surprise me with all types of perfumes every now and then, scents I’d never personally choose now, such as Geoffrey Beene’s Grey Flannel, or Cuba Gold. His obsession with perfume definitely influenced my love for perfume, but it wasn’t until I was around 22 when I actually bought myself a fragrance. It was Frederic Malle’s Monsieur. I like to think of that perfume as my first love. For a while, it was my signature scent. I wore it around Paris, and never felt better. Until the day I wore it on a small plane and caused a bit of a scene, and that more or less traumatised me. After that, I pivoted stylistically and had Diptyque’s Eau Des Sens, Regimes Des Fleur’s Glass Blooms and Dasein’s Winter on rotation. Three scents that defined my time in Los Angeles. I still have a bottle of “Monsieur”. First love never dies.

What is your favourite meal?

Where is your favourite place?

I am grateful to live in Melbourne, especially near the bay. But my favourite place is Los Angeles. There is something special about it. It could be the cinematic history that imbues the culture, and the general unpredictability of the people you meet. Sometimes it feels magical. At first, I wasn’t so sure about it but one day I woke up and never wanted to leave. (Spoiler alert. Against all desires, I did in fact leave at some point.)

Do you have an interesting party trick or any hidden talents?

Before perfume became full-time for me; I used to work as a tarot reader. A quick three-card spread goes down well at parties.

Who would play you in a film of your life?

Where does the name of your brand come from?

Perdrisât is a family name on my mother’s side. To me, creating a perfume always is initially influenced by a personal association with something, and then that initial idea is bottled and shared and is no longer self-reflexive; scent seems inextricably linked to the past, but is equally torn from it. When making a perfume, it always seems to start the same way, I pluck something out of my own personal life and re-contextualise it. It felt thematically right to do that with the name; Modernising the past; but depersonalising the personal.

Who are your perfume for?

Playful, curious, modern “poets” in ill-fitting clothes. Collectors. Romantics. Obsessors. People who don’t take themselves too seriously. Friends who like to talk over each other. Those who enjoy the beauty of story, embellishing the details for the art of conversation. The type of person to awkwardly lean across a neighbour’s fence to smell the gardenias and split their pants doing so. The kind of person whose favourite thing to do is drive by the beach at night, windows down, blasting jazz like Billie Holiday, pretending to be their own protagonist caught up in scripted melodrama: The lighting, perfect. The outfit, immaculate. The rain, synthetic. Movie magic. Someone like that.

Tell us about your latest perfume.

Pretty Boy: the freshly showered, clean-cut gentleman running late to a date, with a bouquet of lilies in one hand, and a bottle of gewürztraminer wine in the other. The sun setting.

Last Word: a chartreuse-suited socialite making a scene across the table. Her name is Angelica, and you wonder, is she laughing with you or at you?

Nightstand: a montage depicting a French exit at a garden party; slipping away under an archway of wisterias, our heroine takes herself home to do her nighttime routine; watching the crepuscular blue last light fade to black as she moisturises her legs.

Bully: The long ride home on the back of the motorcycle, smelling the nape of the rider and the diesel in the air; his reputation precedes him, but underneath all that leather, he’s a shrinking violet.

For the latest release, I was imagining each scent as a different character at a pool party on a hot Summer’s day. The five scents of the new collection include; Love Bomb, Porcelain, Money Water, Fuck Boy and Sycophant. The note I wrote myself in my phone for the Summer collection goes as follows: “a handful of torn fig leaves, poolside melodrama, the scent of the sun on your skin, and the warm dance of an asphalt mirage.”

If someone wanted to try your fragrances, which one would you recommend they try first and why? 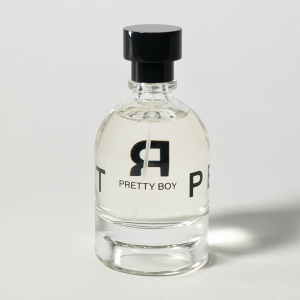 From the first collection, Pretty Boy or Whisky. Pretty Boy is the most wearable (we’re talking lychee and pink pepper in the top, a heart of rose softened by virginia cedar and a base of musky ambrette) but Whisky starts with a bang and is straight to the point. People like that! It’s definitely an icebreaker to the brand.

The five scents from the second collection were all designed for Summer; so far, the most serene is Sycophant (a clean “lying under a fig tree” scent), but Fuck Boy is a conversation starter. Those two seemed to be the most popular so far. I wear Money Water when I go out (it’s an oud scent, mineralised and smokey to evoke mezcal). Although, on quieter days, I personally opt for Porcelain for the minimal and muted tones of iris, green pear and musk. A sophisticated second-skin scent.


What challenges do you want to overcome for your brand?

Firstly, my main challenge right now is finishing the sample sets. They are taking way longer than I imagined. But I promise they’re on their way.

The other challenge I’d like to overcome is being misunderstood as a brand. I’m trying to be playful and modern, but I have already had some backlash online after naming my new scent, “Fuck Boy”. I’m not trying to offend people. In Australia, it’s a very common, casual saying for a type of guy who is a good-looking party boy, who ostensibly stands for little beyond Hedonism. I approach each scent as a character or scene, as if in a movie, and in this case, that type of person was my inspiration. It was a sequel to Pretty Boy for the Summer collection. This for me felt like a fun, carefree scent and it needed to evoke that type of hedonistic character. I think once they smell the perfume, they’d get it. Ironically, all of the backlash is from those who haven’t even smelled any of the perfumes. I like keeping things light and playful, but still make considered choices, and this can be easily misinterpreted. I think people who perhaps do not have the same socio-culture references may mistake my playfulness for some attempt at being an ‘enfant terrible’. There are people who love playfulness in scent and they are the ones who I make perfume for. The brand is not for those who think perfume should be for the strictly, high-brow, serious types. People can say what they want, as long as I known my intentions are pure, I feel good about it. So far, I’ve been deemed deliberately “offensive” and pretentious and although that wasn’t the intention, I’m the first to admit I’m a little pretentious — that part comes easy to a Leo.

In a production sense, my approach is unique in that each scent is hand-crafted by me in Melbourne. The bottles are screen-printed by hand in Melbourne. Each batch is made in a limited run; and filtered by hand, and even the product shots and content is done with help from my friends. It makes everything from production to marketing quite involved and personal but also means everything takes a little more time.

Because of my background in film-making, particularly comedy, it does influence the way I approach perfume-making in general. It’s like scripting, and storyboarding, and zooming in. All the concepts behind the perfumes come from a love of cinema. This is the why I titled each scent after an object (like, Nightstand) or something archetypical (like, Pretty Boy). I like the idea of using the names to conjure a place or time or character in place of purely listing notes. A sort of mise-en-scene. I think this cinematic approach could be considered unique.

You can find out more about Perdrisât at https://www.perdrisatperfume.com
Reactions: JoM68, PaveLL, furrypine and 1 other person
About the author

I recently found out about this house, but the interview above sheds a lot more light on the brand. Very informative.
I think his approach is interesting and I wish him every success.